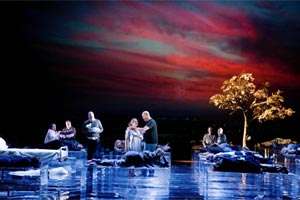 English National Opera has called itself the “House of Handel”, and cites Nicholas Hytner’s Olivier Award-winning “Xerxes”, trotted out regularly since its inception a quarter of a century ago, and much more since, as evidence. Of course, “Xerxes” was meant to be staged; “Messiah” was not. On this account, it ought to stay that way. This production is utter drivel from beginning to end, and was so patronising as to be beyond belief. From the opening, with a projection of a dictionary definition of the word “messiah” – yawn – to more projections, of “Part 2” and “Part 3” at the beginning of those sections, one wondered what was the point of it? Does Deborah Warner think her audience so dumb?

Part One – though we were not told this! – had a massive video projection of a foggy cityscape at dusk at the back of the stage. From right to left in front of this there were: men at computers, a row of wooden benches, an indifferent woman watching a television whilst sat on her armchair, and then a woman reading a book in bed. Throughout this mess of incongruous thoughts would be dancers, a small child – he would run about a lot throughout the performance – and the ENO Chorus, its members ambling their way around. 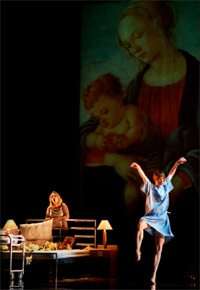 Part Two opened with a video projection of a time-lapse shot of a Tube station’s escalator leading to a large concourse with lots of people walking about, naturally enough. This Part describes Jesus’s passion, resurrection and ascension, so the making of the stage area as a field, which could be rolled away to reveal His tomb made sense, though why it was covered by two large black cloths remained a mystery. Overall, this was a simple conception, and when kept simple, it worked by not distracting from the music.

Part Three continued the bizarre sights with a hospital bed and the death of a woman (after ‘I know that my Redeemer liveth’) surrounded by two-dozen transparent-plastic coffin-shaped boxes, on which people slept before they gradually rose, danced and meandered about. The video projections changed throughout, and occasionally showed ‘traditional’ religious paintings, of Mary or Jesus, reflecting the story or characters being sung about. One awesome projection was at the end, about fifteen minutes long, of a sunrise: all was dark and the sun rose to reveal a deep-blue sky and a city waking to life. Having rectangles of golden foil fall on the audience during the final ‘Amen’ added insult to injury. 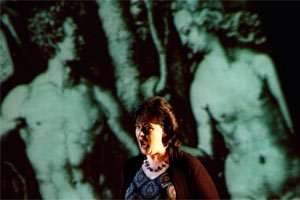 Better to forget all of that and focus on the music and singing. Laurence Cummings has conducted quite a few accounts of “Messiah” in London – about three per year in this city’s premier concert halls – and his grasp and understanding of the music was palpable; if the drama being staged was dull, then the opposite was true for the orchestral contributions. He coaxed plenty of emotional appeal, dramatic urgency – particularly in Part Two – and was aided and abetted by some superb playing. Julian Brewer’s trumpet solos in Part Three were superb, expressing the hope of the sung words. The string sound had the winning combination of ‘period’ quality with heft. Some clarity was emasculated by having the orchestra in the pit (obviously), another reason for not staging “Messiah”.

The quartet of solo vocalists excelled in their parts: Sophie Bevan’s secure and evocative soprano was beautifully captured (the familiar ‘I know that my Redeemer liveth’ pined and was very moving). Catherine Wyn-Rogers’s creamy-rich contralto was very seductive, and her Part Three duet with tenor John Mark Ainsley (‘O death, where is thy sting’) caught desperation. Coupled with the urgency of her voice in the Air ‘He was despised and rejected of men’, she demonstrated her operatic qualities. Bass Brindley Sherrat smudged his lines somewhat, and was occasionally too operatic, suggesting this is not quite his repertoire. The ‘other’ soloist was the excellent Harry Bradford (BBC Radio 2 Young Chorister of the Year, 2008), in his school uniform, who sang in the nativity scene with excellent projection and clarity.

On the whole, the Chorus sang well, though the sight of these singers in slow-motion walking about during ‘Hallelujah!’ chorus made it strangely subdued. The infantilisation by Warner of what is a great evocation of the Christian story was found wholly deficient. The singing and orchestral contributions were great enough, and to hear “Messiah” without disruptive applause was a boon, too, though the surtitles were missed.