Wagner
Parsifal – Bühnenweihfestspiel in three acts to a libretto by the composer [sung in an English translation by Richard Stokes, with English surtitles] 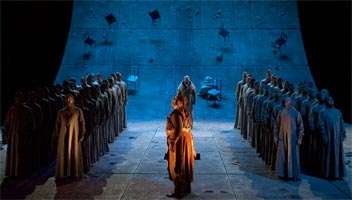 First seen at English National Opera in 1999, a generous reception greeted this opening-night revival of Nikolaus Lehnhoff’s cogent production of “Parsifal”. Rightly so, for this performance was musically very distinguished in parts and seemed far shorter than its five-and-a-quarter hours (including two intervals). With the ENO Orchestra on extremely committed form, the score emerged from the pit with spaciousness and clarity under Mark Wigglesworth. The trumpets and trombones had warmth and bloom and the woodwind sustained ethereality throughout, sounding as magical at the end as they had at the start. These qualities were all evident from the ‘Prelude to Act One’, although it could be argued that some of the high string-writing that overlays mystic shimmer was perhaps too recessed, but as the drama unfolded this lack of prominence began to feel appropriate to the staging. The off-stage instruments were nicely distanced and the bells of the outer acts’ Transformations had effective resonance. In the middle act tension was maintained for the pivotal Kundry-Parsifal encounter, although earlier the agitated chromatic music of Klingsor’s realm could have had more frenzy and menace. Beautifully as the Flower-maidens sang, their music did not quite develop the increasingly threatening surges that should underpin their attempts to lure Parsifal from his quest. Minor quibbles, for Wigglesworth’s understanding of pace and space ensured there were few longueurs and allowed the drama to unfold naturally. The hugely augmented chorus was a decided asset, and at full throttle the vocal strength of the massed knights was appropriately fearsome. The off-stage voices sounded well, too. 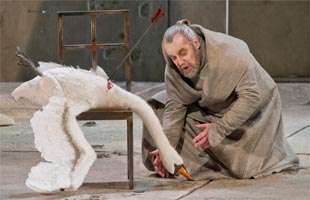 However, performances of “Parsifal” rest on the principal singers and their ability to bring the narrative passages alive as they either recount their stories and experiences or bewail their predicaments. John Tomlinson sounded fresher of voice and more relaxed vocally than of late – he relished the part that Gurnemanz has in relating the “back story”. Every word of Richard Stokes’s crafted translation that Tomlinson sang he brought to vivid life, rendering the surtitles superfluous: this added to the immediacy of the drama. Even at the few moments where some vocal wear-and-tear was evident, Tomlinson managed to make dramatic point of them. His is a compelling dramatic performance. 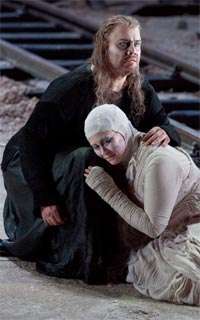 If Stuart Skelton is not singing Parsifal everywhere in the next few years I would be surprised for his is a terrifically assured portrayal. Vocally the culminations of the two later acts were thrilling as Skelton’s clear trumpet-like sound rang out into the auditorium. He too made every word tell and was dramatically convincing both as the naïve intruder into the realm of the knights and more so as the returning world-weary pilgrim finally reaching the completion of his mission. His physical interaction with Jane Dutton’s mute Kundry in that scene was very affecting indeed.

Dutton had replaced Iréne Theorin as Kundry at some stage during the rehearsal period, and in Act One her rich lower and middle registers were real assets. However, Kundry is a tricky role as the second act makes considerable demands on the voice – following the scene with Klingsor, Kundry’s music initially is soft, reassuring and lilting at “I saw the child” and then becomes increasingly desperate and dramatic, and takes the (usually mezzo-soprano) singer to project forcefully at the extremes of the vocal range. Here, Dutton sounded effortful and choppy, and her diction became cloudy. Nonetheless her stage presence was strong and she captured well the essence of the restless cursed Kundry. 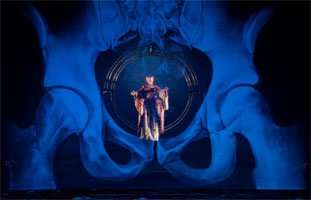 In this production, the depiction of Klingsor leaves him stuck, apparently in a mirror, behind a gauze on which is projected an X-Ray of his self-mutilated torso. With the music depicting a frenetic quality to the character, to leave him as a static entity, whilst it points out his impotence, seems a miscalculation. The singer is now entirely dependent on word-painting and vocal colouring to make his effects for there is a limited amount of grand-gesture arm-waving that one can deploy without appearing ridiculous. Klingsor needs to have charisma of a sort to balance the drama. Tom Fox did as well as he could, but his vocal tone was somewhat arid, not malevolent or menacing enough to match Gurnemanz’s description of him in the first act. 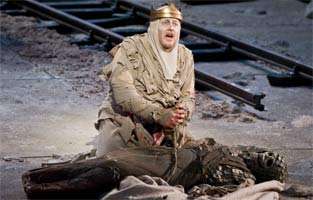 As the father and son pairing of Titurel and Amfortas we had Andrew Greenan and Iain Paterson. In this staging Titurel is very present at his first appearance and Greenan’s robust and modulated singing fell gratefully on the ear. Paterson was a very strong Amfortas, too, his singing carrying warmth and desperation from its initial long-breathed utterances. Lehnhoff’s production keeps Amfortas rather mobile in his pain and desperation – Paterson took on the mantle of his predecessors well. He certainly brought out the character’s self-loathing and self-destructive tendencies; but also the true tenderness he has for his father as well. Both singers made every word tell.

Lehnhoff’s production, with its arresting designs and costuming, wears its years well. The settings are beautifully lit. The costuming and depiction of the knights as a kind of terracotta army waiting for their moment is visually intriguing and theatrically suggestive, not least when in the final act their waiting has become too much for them. The Flower-maidens’ presence as lily-like creatures with long tendril arms that hide barbs provide a good contrast. The deployment of the knights was well handled, too – the understated yet regimental ceremonial of the first act giving way to the more disorganised and desperate rebellion of the third well accentuated. The closing image of a few solitary and independent-thinking knights slowly deserting the seemingly renewed brotherhood and following Kundry and Parsifal out on a new journey along the railway track is potent in its combination of hope and uncertainty. No uncertainty about the quality of this revival. See it!