Philip Glass
Akhnaten – opera in three Acts to a libretto by Philip Glass in association with Shalom Goldman, Robert Israel, Richard Riddell & Jerome Robbins [sung in Egyptian, Akkadian, Hebrew and English, and spoken in English, with no surtitles, the libretto is translated in the programme] 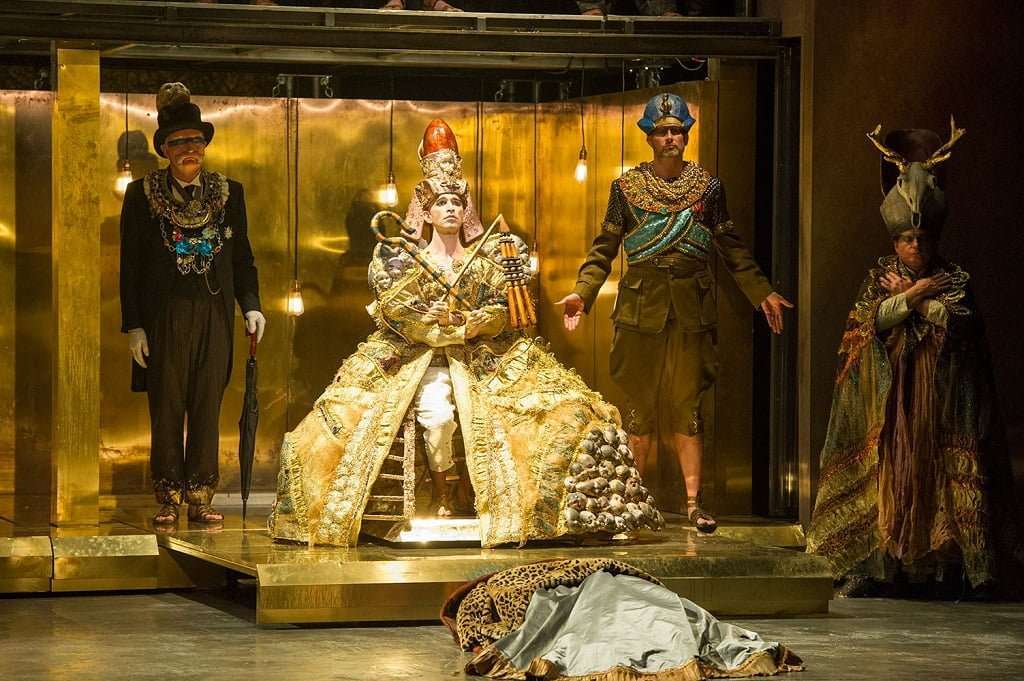 After the success of their collaboration with Philip Glass’s second opera Satyagraha in 2009 (and twice revived), Phelim McDermott’s Improbable company together with English National Opera have returned to Africa – this time to the geographical opposite of Satyagraha’s South Africa – for Glass’s follow-up, his third opera, Akhnaten, set around 1350 BC in Egypt. ENO scored a massive popular success (if to critical bewilderment) thirty-one years ago in its first production of Akhnaten, directed by David Freeman and conducted by Paul Daniel, which was revived in 1987. So, the opening night of this new production had – personally – a sense of very rewarding ‘catch up’ about it.

Fashioned from sources in their original languages with linking narration in English, resonantly intoned by Zachary James’s Scribe, Akhnaten takes the form of a series of slow-moving tableaux. From the death of Akhnaten’s father (and the elaborate rituals that sees his accomplishments weighed against a feather allowing him into the netherworld as outlined in the Egyptian “Book of the Dead”), we see the naked Akhnaten first dressed and then crowned. He later rails against the priests of the many gods, and instead establishes a monotheistic religion worshiping the sun god Aten, but falls to a revolution of the old guard and is replaced by his young son Tutankhamun.

There is a ritualistic pace to proceedings, which McDermott enhances by the slow motion of everyone involved, with one exception, the Gandini Juggling Group (no surprise that the choreographer is Sean Gandini), Glass’s teeming score is visually enhanced by a succession of outstanding routines: the London Coliseum is where to be for such a spectacular acrobatic extravaganza. And it’s authentic too – the programme includes information about the Eleventh Dynasty Egyptian wall-painting of female jugglers. 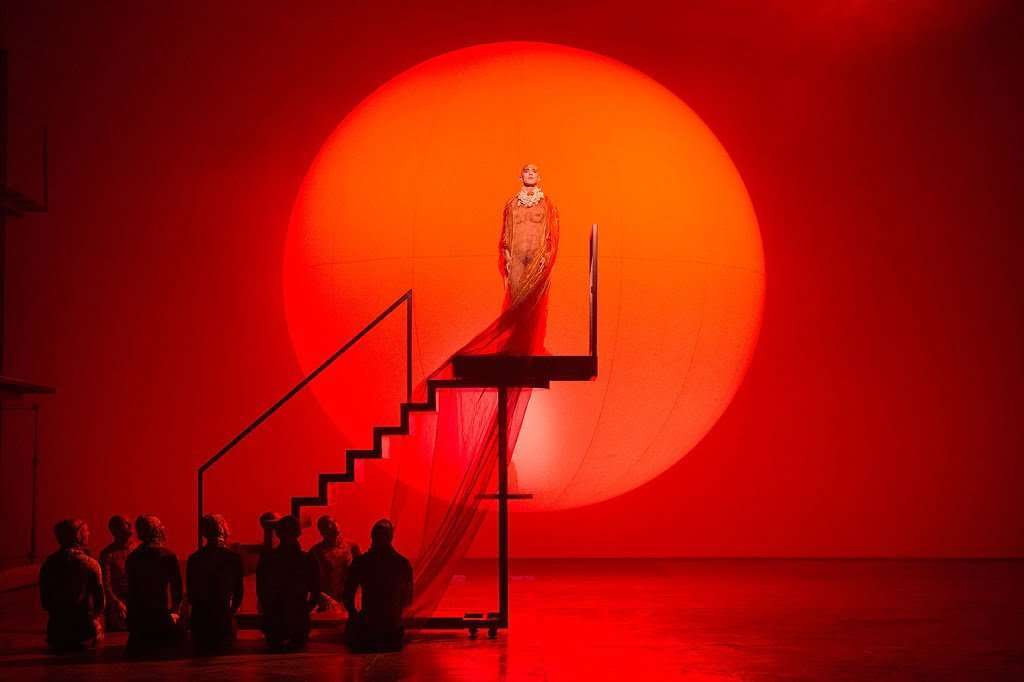 From the off it was clear we were in for a visual treat: the subtle changing colour of the patina of ancient stone, beautifully lit on a screen across the stage, gradually unveiling three levels, like rows of an Egyptian papyrus, with pictograms of seated worshippers (at first unison in motion, later juggling) at the top, the chorus in the middle, and the dead king, the scales and the scribe at the bottom.

From the centre of the middle level emerged naked countertenor Anthony Roth Costanzo as Akhnaten, slowly descending a staircase to be dressed ceremonially, in a great hooped skirt and given the accoutrements of power (the crook and the flail). As he emerges, the music changes – from Glass’s typically shifting arpeggios in three and four beats, to more intimate, single lines for woodwinds.

Suddenly I was aware of a distinct whiff of Shostakovich. And Richard Strauss’s Rosenkavalier came to mind too as Glass’s first Act is like Strauss’s – an extended waking and dressing scene complete with courtiers (though without Ochs). Glass offers two large trios for high voices: for the king with his mother and wife, Nefertiti, first at his accession and then (just like in Strauss’s final Act) at the end, as a ghostly memory of Akhnaten’s reign. 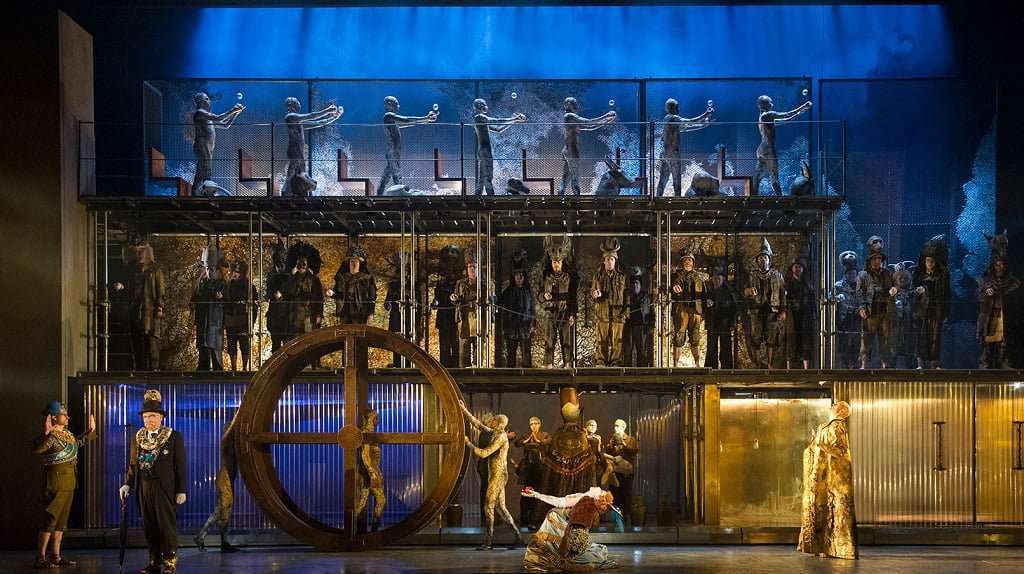 There is great variety in Glass’s score, mostly in the minor key and dark in hue, omitting violins entirely. This is enhanced by both ENO debut-conductor Karen Kamensek and her committed players and the involving interplay with the juggling and, elsewhere, the calming slowness of the cast. When Nefertiti and Akhnaten, both in diaphanous red robes, enter from opposite sides and slowly unite in love by entwining their long trains, McDermott allows the music to mesmerise with minimal distraction. And, at the end of that second Act, Akhnaten sings (in English) his ‘Hymn to the Sun’ (which features Baroque ritornello form), his crimson costume is mirrored in the gradual colouring of the large orb that now dominates the stage. It looks like a spherical balloon, but it could well be a spectacular tromp-l’œil. However it’s done, the vibrancy of the changing tint and its definition with the contrasting backdrop, matches Robert Wilson’s effects with ease. I should mention Akhnaten and Nefertiti’s six daughters, in white but connected by their blue hair, entangled like a ball of wool.

Kevin Pollard’s costumes aren’t traditional Egyptian (I’m not aware that the ancients used hooped skirts), and Akhnaten’s courtiers have distinct modern traits. Clive Bayley’s Aye (Nefertiti’s father) is the most up-to-date, in black suit, top hat (topped by a skull) and furled umbrella, whereas James Cleverton’s Horemhab has plus-fours and tweeds and Colin Judson’s High Priest of Amon looks like a high-ranking Christian cleric. Perhaps the point is – as the opera itself ends in contemporary times – that the functionaries of state have found it hard to accommodate the vagaries of independent and eccentric rulers.

With three non-English languages being sung it’s hard to comment on enunciation, though when Costanzo starts singing the ‘Hymn’ he is clearly audible. Zachary James’s towering Scribe certainly is commanding in the narration (whether aided by amplification or not). This is an extraordinary company effort (and how good has ENO historically been at those – budget penny-pinchers please note), and the Chorus and Jugglers got as much cheering acclamation as the individual contributors.

Whatever reservations you might have of the music (and I surprised myself as to how much I was bowled over by it), there is no more totally involving work on the London stage at the moment. So what next for Improbable/ENO collaborations – perhaps a move away from Glass but retaining the African angle? How about Aida or even Meyerbeer’s L’Africaine?