Skip to content
LnRiLWNvbnRhaW5lcltkYXRhLXRvb2xzZXQtYmxvY2tzLWNvbnRhaW5lcj0iNmIzNDMzNmNmZTc3NWZiNGJlMTVjMmIwMzU3NWM1MjYiXSB7IHBhZGRpbmc6IDI1cHg7Ym94LXNoYWRvdzogNXB4IDVweCAxMHB4IDAgcmdiYSggMCwgMCwgMCwgMC41ICk7Ym9yZGVyOiAycHggZG90dGVkIHJnYmEoIDEwOSwgMTA4LCAxMDgsIDEgKTsgfSAudGItZmllbGRbZGF0YS10b29sc2V0LWJsb2Nrcy1maWVsZD0iODM3Y2ExZjc0MGRjZDdkOTdlMzQzOWMyYjIwMWZmZTMiXSB7IGJhY2tncm91bmQtY29sb3I6IHJnYmEoIDIzOCwgMjM4LCAyMzgsIDEgKTtwYWRkaW5nLXRvcDogMTBweDtwYWRkaW5nLWJvdHRvbTogMTBweDtwYWRkaW5nLWxlZnQ6IDEwcHg7IH0g
LnRiLWNvbnRhaW5lcltkYXRhLXRvb2xzZXQtYmxvY2tzLWNvbnRhaW5lcj0iNmIzNDMzNmNmZTc3NWZiNGJlMTVjMmIwMzU3NWM1MjYiXSB7IHBhZGRpbmc6IDI1cHg7Ym94LXNoYWRvdzogNXB4IDVweCAxMHB4IDAgcmdiYSggMCwgMCwgMCwgMC41ICk7Ym9yZGVyOiAycHggZG90dGVkIHJnYmEoIDEwOSwgMTA4LCAxMDgsIDEgKTsgfSAudGItZmllbGRbZGF0YS10b29sc2V0LWJsb2Nrcy1maWVsZD0iODM3Y2ExZjc0MGRjZDdkOTdlMzQzOWMyYjIwMWZmZTMiXSB7IGJhY2tncm91bmQtY29sb3I6IHJnYmEoIDIzOCwgMjM4LCAyMzgsIDEgKTtwYWRkaW5nLXRvcDogMTBweDtwYWRkaW5nLWJvdHRvbTogMTBweDtwYWRkaW5nLWxlZnQ6IDEwcHg7IH0g
Verdi
Rigoletto – Melodramma in three acts to a libretto by Francesco Maria Piave after the tragedy Le roi s’amuse by Victor Hugo [sung in an English translation by James Fenton, with English surtitles]
LnRiLWNvbnRhaW5lcltkYXRhLXRvb2xzZXQtYmxvY2tzLWNvbnRhaW5lcj0iNmIzNDMzNmNmZTc3NWZiNGJlMTVjMmIwMzU3NWM1MjYiXSB7IHBhZGRpbmc6IDI1cHg7Ym94LXNoYWRvdzogNXB4IDVweCAxMHB4IDAgcmdiYSggMCwgMCwgMCwgMC41ICk7Ym9yZGVyOiAycHggZG90dGVkIHJnYmEoIDEwOSwgMTA4LCAxMDgsIDEgKTsgfSAudGItZmllbGRbZGF0YS10b29sc2V0LWJsb2Nrcy1maWVsZD0iODM3Y2ExZjc0MGRjZDdkOTdlMzQzOWMyYjIwMWZmZTMiXSB7IGJhY2tncm91bmQtY29sb3I6IHJnYmEoIDIzOCwgMjM4LCAyMzgsIDEgKTtwYWRkaW5nLXRvcDogMTBweDtwYWRkaW5nLWJvdHRvbTogMTBweDtwYWRkaW5nLWxlZnQ6IDEwcHg7IH0g 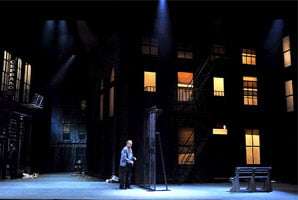 Occasionally there are ideas that pop into one’s head that are so absurd and beyond the realms of possibility, and, perhaps, so horrific, that the mind dismisses them, almost subconsciously. Such ideas may be so frightening if they were ever to come to fruition that any attempt to stage them, or produce a film about them, will never work because the audience will not believe in them – the axiom “truth is stranger than fiction” applies.There have been events in the news recently that might change one’s perception of this opera in an irreparable way. There can no longer be any sympathy for the ‘tragic’ figure of Rigoletto, as presented in the opera; Victor Hugo’s play “Le roi s’amuse” presents matters differently. Here he is someone who deserves the ridicule he receives as well as his physical disfigurement. Make no mistake; there is no sympathy to be had with Rigoletto. The only tragedy of the opera is that Gilda dies; even her ‘abduction’ by the Duke’s men can now be seen as liberation. Why? Think of these pairings: Wolfgang Priklopil and Natascha Kampusch; Josef and Elizabeth Fritzl; and, most recently, Phillip Garrido and Jaycee Lee Dugard. To them can be added Rigoletto and Gilda. In the latter two pairings there were sexual relations, so not quite similar to Rigoletto and Gilda, but Austrian Priklopil abducted Kampusch aged ten and kept her confined for eight years. 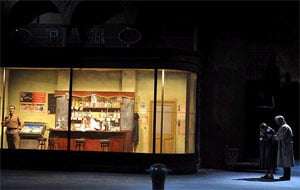 Gilda’s story has similarities to all the others, but the overriding theme is her loyalty to Rigoletto, which is a classic case of Stockholm Syndrome (invented in 1973 to account for the loyalty shown by the hostages in a Swedish bank siege to their captors); so much so that she sacrifices herself for her captor. (Verdi’s librettist was clearly years ahead of their time!) In stark terms, Rigoletto has kept his daughter locked up in their house, away from all eyes, though he allows her to go to Mass on a Sunday. Like the true horror stories, and the case of Baby Peter, it is sometimes impossible to see what is directly in front of our eyes. To recognise what is really going on requires an event of such horror, or the event concerned to run its course, before one realises. Perhaps one can understand how the social workers in the Baby Peter case missed things, for I had missed the implications in “Rigoletto”.There is clearly much scope for a modern updating along these lines, but the current production, dating from 1982 – in its twelfth revival – updates the original setting of sixteenth-century Mantua to the 1950s’ Mafiosi of New York. It works well, and it looks great in Patrick Robertson’s and Rosemary Vercoe’s sets. The first act is a swishy bar, with lots of men in suits having a good time, a fine match to the Court of the Duke of Mantua. Act Two is a sinister, dark alley-way with Rigoletto’s house and the final act is a somewhat sleazy bar (of the assassin, Sparafucile). The detail of Jonathan Miller’s direction told many individual stories without being distracting, and the lighting is superb; Act Two’s shadows and Act Three’s oppressive nature complementing the musical ideas triumphantly. 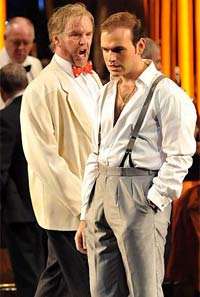 Michael Fabiano was a stunning Duke, and no wonder women ruin themselves for this duplicitous rogue: power is the ultimate aphrodisiac. He carried himself about in the manner of a man in control of events, and he dominated scenes, as a Duke ought to. His singing rang clearly throughout the theatre, and was unabashed in virtuosity. His love-interest Gilda (Katherine Whyte) is a stronger character than most realise, and Whyte was able to draw on these traits to give a rounded account of her. Timid with her father (Rigoletto) at the beginning, she presented a dignified presence at the end, where her determination to resolve the situation leads to her knowingly to her death. The strength of Gilda’s character was ably reflected in Whyte’s singing. 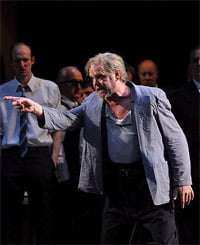 The baritone Anthony Michaels-Moore gave a fine performance of Rigoletto, and, like others, there was superb characterisation, though it was the dagger of Sparafucile (Brindley Sherratt) that hung over proceedings dominantly. Sherratt’s heavy bass was laced with evil and foreboding. When he leaves Rigoletto after their first meeting, Sparafucile walks to the back of the stage to exit, and Sherratt held a long note pianissimo to chilling effect. Their two voices sparred together well; Rigoletto’s determination to do the right thing (as he sees it, avenging his daughter’s dishonour) contrasting with the unfaithful Sparafucile.Maddalena, Sparafucile’s sister, was given more than just a cursory treatment of a seduced woman by Madeleine Shaw. There was the hint of jealousy over the Duke’s other liaisons, so much so that her motivation for saving his life, at the expense of someone else (Gilda, unknown to her and Sparafucile), convinced. Surprisingly, Iain Patterson’s Monterone failed to capture the mood, his baritone rather too sunny for invoking the fatal curse on Rigoletto.Stephen Lord’s conducting inspired only a pedestrian account of Verdi’s score. The chorus was in jovial form, and populated the opera with quirky asides and taut ensemble singing. Nevertheless, a revival of such a classic production deserves to be seen, particularly when looking as good as it does, and when there is such fine exponents of the leading roles of Rigoletto.