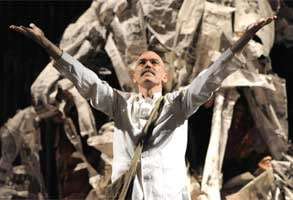 Such was the success of this magnificent production of “Satyagraha” when English National Opera first staged it in 2007 that it became the most popular ‘contemporary’ opera the company had ever put on. Transcending the potential banality of Philip Glass’s minimalist score, it offers a cohesive, compelling and – above all – marvellously cathartic experience.

Glass’s 1980 opera – the second part of a trilogy featuring exceptional men whose ideas have profoundly influenced civilisation – presents episodes in the early life of Mahatma Gandhi, whose spiritual and political path gradually opened up as he worked as a lawyer in South Africa at the turn of the 20th-century. There is no on-going narrative; the sung text, in ancient Sanksrit, is derived from the “Bhagavada Gita” – a poem concerned with the teachings and musings of Krishna, which Gandhi studied and quoted. “Satyagraha”, roughly translated as ‘truth force’, is an idea which formed the heart of Gandhi’s doctrine of nonviolent resistance, and which director Phelim McDermott maintains will, sadly, always have relevance in a war-torn world.

Glass’s appealing score is, on paper, simple in the extreme, comprised entirely of scales and arpeggios in various permutations, unadventurous tonal harmonies and a lack of development. Yet it is far more than the sum of its parts: by turns haunting, dramatic, beautiful and mesmerising, overall it is remarkably moving and memorable. McDermott’s enthralling production, laden with delights, works with and enhances the strength of the music to create a powerfully uplifting experience. 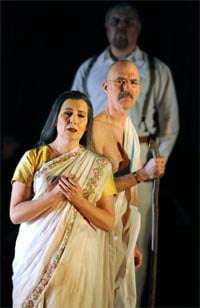 A semicircular corrugated iron wall provides a simple backdrop, opening to reveal myriad doors and apertures through which scene-transforming crowds and creatures – Indian gods among them – magically appear and disappear. Crucial to the dissemination of Gandhi’s ideas and opposing arguments to them, newspapers feature prominently and imaginatively. At one point the stage seems alive with rustling, writhing pages. Great looming papier-mâché ogres menace Gandhi threateningly.

In the final act, strips of Sellotape are stretched across the stage in slow-motion to create a shimmering wall, blurring reality and perfectly complementing Glass’s atmospheric music – and which coalesces into another lumbering monster. Key to bringing the staging so fluently to life is the excellent work of the “skills ensemble” of physical theatre performers: superb stilt-walkers, puppeteers and mime artists.

An equally vital element of the production’s great success is the terrific musical performances by singers and orchestra. Whatever its effects on the listener, the relentlessness of Glass’s music places immense demands on musicians. Yet the ENO cast and musicians are not just technically near-faultless, for their performances bristle with incredible verve and commitment.

At the head of an impressive cast is Alan Oke’s masterful return in the central role. Oke’s effortlessly clear tenor voice and sympathetic characterisation create a deeply affecting portrayal of Gandhi. The sense of his loneliness and isolation in the opera’s final moments is especially poignant. Also worthy of special mention is Janis Kelly’s soaring soprano. The ENO Orchestra, under the tightly-controlled but inspiring direction of Stuart Stratford, played brilliantly; the chorus has rarely sounded so together.

This outstanding production is, once again, highly recommended; no doubt it will be a stalwart at ENO for many years to come.