Verdi
Simon Boccanegra – Opera in a Prologue & three acts to a libretto by Francesco Maria Piave with additions by Giuseppe Montanelli after the play by Antonio García Gutiérrez [1881 Version with libretto revised by Arrigo Boito; sung in James Fenton’s English translation with English surtitles] 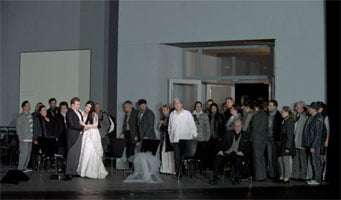 The last English National Opera production of Simon Boccanegra (in the late 1980s) divided critical opinion but, whether you liked it or loathed it, it was one which undoubtedly had an emotional impact true to the heart of this great work. It would be good to report that ENO’s latest staging hits similar spots or has revelatory insights – but alas this is not the case. This first night was a patchy affair. No complaint about Edward Gardner’s conducting, however, and lavish praise is due for the Orchestra’s fabulous music making that. Simon Boccanegra is an unusually sombre work, full of quiet atmospheric writing. The strings produced warm yet transparent tone and the lower woodwind and brass added their distinct sonorities to the mix. Gardner’s interpretation was loving; and full of energy when needed – he is a very singer-friendly conductor. 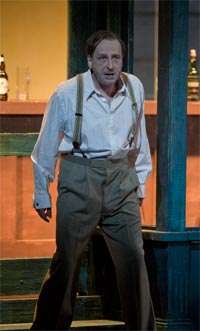 Brindley Sherratt’s inviting yet gravelly bottom register allied to a wirier top is perfect for the vengeful Fiesco. Every word was audible and pointed, and his realisation of the folly of his fixation on retribution was deftly handled – at least from a vocal perspective. In the title role Bruno Caproni’s interpretation is rather generalized but who sang with generous tone. Peter Auty was a strong-voiced and headstrong Adorno; Roland Wood an impressive and charismatic Paolo. If Rena Harms does not have the creamy lyricism that some have brought to the role she still dominated the ensembles well, and managed some of the technical demands with considerable aplomb. Occasionally her tone became constricted under pressure, but she used this to dramatic effect – where she could. But therein lay the problem with the production and the direction in that she and her colleagues seemed cast adrift. 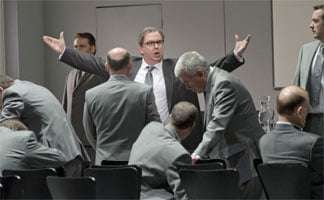 The setting is updated. In the ‘Prologue’ the young Boccanegra is encountered in leather-jacket and jeans emerging from a car parked in front of the Fiesco Palace (the front door of which is not visible to a fair proportion of the audience owing to a rather obtuse bit of design). Fiesco is nattily suited, as are many of the Plebian associates of Paolo. The setting is in Technicolor age as if viewed through tinted spectacles, but once Boccanegra assumes power in the opera proper everything turns very grey and drab, as if power sucked the life-blood of all associated with it. At crucial flashbacks, colour briefly re-emerged as a projection. There is evidence that Dmitri Tcherniakov feels it necessary for Amelia to have some serious personality disorders or depression, and to bring an element of trauma to the relationship with men – be it her father, adopted father, unwelcome admirer or lover. Similarly the motivations of the men themselves are portrayed as suspect. The director also feels the need to provide background explanation of the plot’s complexities by projecting text onto the curtains prior to each scene. Perhaps he has a low opinion of our intelligence.

The grey of the costuming and settings drains all meaning from the characters – some of Verdi’s most detailed. One feels sorry for the singers. Caproni suffered most – Boccanegra’s sagacity and generosity never quite emerged and didn’t dominate in the Council Chamber scene as he should. He was also not poisoned, but drifted from the world suffering from intermittent dementia – suggested by his vacant expression and his playing with a paper (sailor’s?) hat before departing this world. Wood was left to resort to some stock, overly theatrical gestures of aggression which marred his performance. Sherratt ends up portraying Fiesco as a sloppily dressed, inhaler-puffing dodderer – hardly the image that his music conjures up. There are other irritations. Do we really need to see Boccanegra drag the dead Maria’s body out of the house whilst fighting off her relations and household? This was evidently supposed to mirror Boccanegra’s later embrace of Amelia – but it detracted.

As the libretto demands, there are constant references to swords and other weapons when there were none to be seen, and the stage was too often full of cluttering stackable metal-framed chairs that were audible when being removed or re-positioned during the interludes or scene preludes. Worst of all is the ruining of the opera’s final quiet moments by having Amelia and Adorno start to engage in a noisy fight. The whole concept is perverse and ill-considered. Fatally, it lacks theatricality – hence the rather muted audience response. Even those who booed seemed without the energy to indulge their favourite pastime. Perhaps they’d turned grey, too.