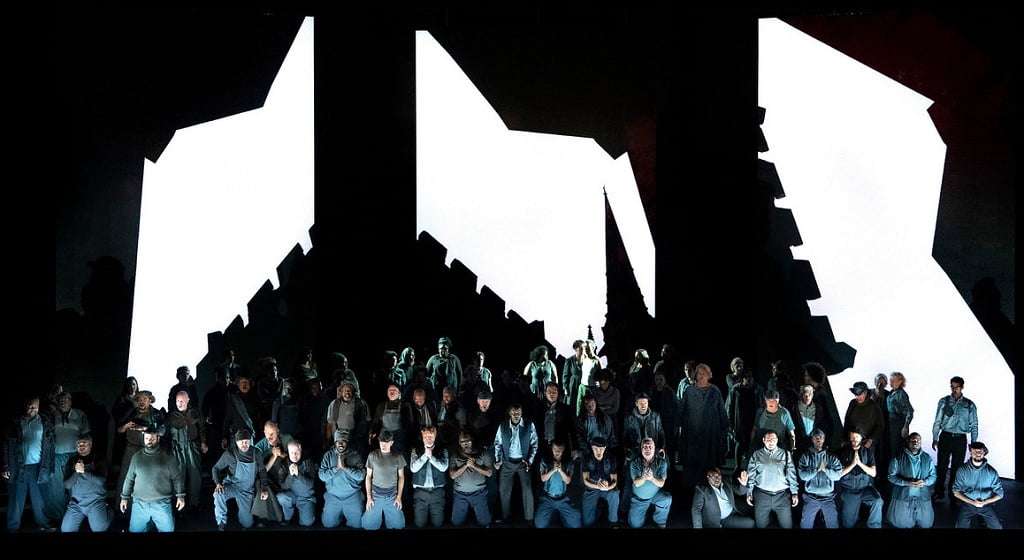 English National Opera has form with staging tried and tested Christian choral works, and it could only be a matter of time before its tally included Britten’s fifty-year-old-plus War Requiem, in an elaborate staging from Daniel Kramer (who is also ENO’s Artistic Director) and his designer, the German photographer Wolfgang Tillmans, marking the Armistice centenary. As Derek Jarman realised in his harrowing 1989 film treatment of War Requiem, Britten’s music, whether specifically for theatre or not, is theatrical to the core, and War Requiem comes with layers of drama – angelic, remote children’s choir, soprano angel, and tenor and baritone soloists as two soldiers emerging from the main chorus – already built in. One of the main considerations in any conventional concert performance is to make these layers register with each other as much as with viewers.

This is infinitely more immediate by the soldiers, who sing Britten’s settings of nine of Wilfred Owen’s war poems, in effect an English song-cycle with its own chamber ensemble firing multiple connections with the Catholic Requiem liturgy. This is one of Britten’s great inspirations, and it sounds as fresh and direct now as it did at the premiere (available on Testament). The main reason this new staging succeeds is due to Tillmans’s powerful and haunting imagery, which gets straight to the point of the pity of war in hugely magnified photographs (shown on three screens) taken from a 1920s’ German anti-war book to accompany the opening section and then continues with his own photos, including panoramic cloudscapes, flowers, the shell of the bombed Coventry Cathedral (the 1962 first-performance marked the consecration of the new one), contemporary fascist riots, and at the end a Caspar David Friedrich-like image of hope and renewal. The imagery complements and sharpens music and text without overpowering them, and Charles Balfour’s lighting is very atmospheric. 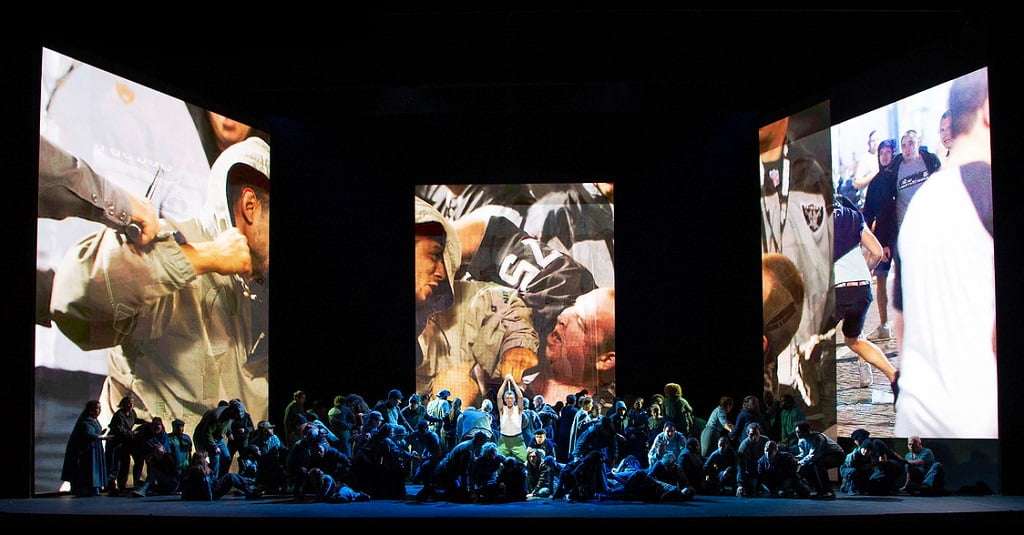 Kramer has his work cut out directing the members of the chorus, who are dead, or ghosts, or dispossessed, but he understands that, as with all settings of the Requiem, the work’s centre of gravity is the epic, multi-section ‘Dies irae’ sequence that moves from visions of terror to the finality of the ‘Lacrimosa’. The ‘Offertory’, which includes ‘So Abram rose’, feels stranded by two curtain-down scene-changes covered by what sounds like improvised percussion rumblings, but the snowbound setting for a military funeral during the ‘Sanctus’ remains in place for the rest of the work, ensuring the desolation of ‘Strange meeting’. Kramer spreads his anti-war net wide to reference the Srebrenica genocide of 1995 (accompanying the soprano’s ‘Liber scriptus’), but on the whole he keeps overt emotional manipulation under control. His direction of the two soldiers – a cabaret turn for ‘Out there, we walked quite friendly up to Death’; a dignified and moving staging of ‘Strange meeting’, which is the goal of the piece – consistently brings Britten’s pacifist agenda centre-stage (as it does in concert performances), but he does expose the corrosive irony and bitterness between the poems and the Latin text.

I had assumed that Kramer would exploit the Coliseum’s size for some stunning sonic perspectives, but everything comes from stage and pit. Martyn Brabbins (ENO Music Director) often makes the main orchestra sound as intimate and detailed as the soldiers’ chamber group, and there were times – for example in the ‘Dies irae’ and in the huge build-up of the ‘Libera me’ leading into ‘Strange meeting’ – when I craved more volume and terror. Brabbins, though, is master of both the bigger and smaller pictures, and the ensembles play with great distinction. The Finchley Children’s Music Group, present a lot of the time and blurring the difference, and distance, between them and the main chorus, are marvellously recessed in its other-worldly music, while the main chorus sings with incisive energy and bite. Emma Bell, cast as an angel-human hybrid, fills the Coliseum with glorious sound. David Butt Philip and Roderick Williams, both in wonderful, tender voice, sum up human frailty and love. For all the staging’s moments of visual grandeur, it is sympathetic to the music, and Tillmans’s designs don’t impose a specifically German view on this very British work. The audience was very attentive and quiet throughout.