Tchaikovsky
The Queen of Spades (Pique Dame) – opera in three Acts and seven scenes to a libretto by the composer & Modest Tchaikovsky based on the novella by Pushkin [sung in an English translation by Neil Bartlett & Martin Pickard, with English surtitles] 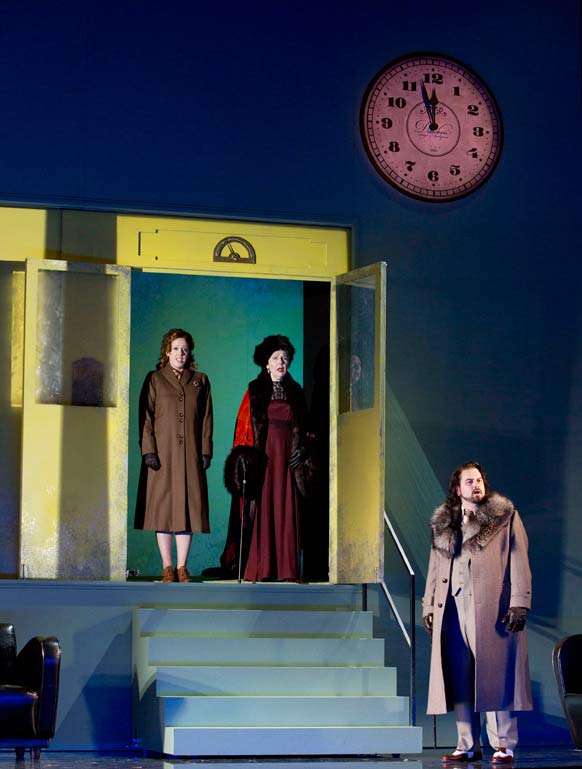 Tchaikovsky thought The Queen of Spades (Пиковая дама, Pikovaya dama) one of his best works, but it remains an opera (the composer’s last but one) admired rather than loved. Pushkin’s story – the soldier Hermann throws over his fixation with Lisa for his fatal obsession with the secret of a winning gambling formula kept by the old Countess, Lisa’s grandmother – places the two leads in the grip of a pitiless fate, with all the characters save one playing second fiddle to one of Tchaikovsky’s most sumptuous but obliterating scores. This may have been of great significance to the composer, but it makes it hard to identify with Hermann and Lisa. In turn, this effectively gives a director carte blanche, something that David Alden – the director of ENO’s recent Otello and award-winning Peter Grimes – has grasped much in the same way as nature abhors a vacuum.

To start with, his updating from time-specific late-eighteenth/early-nineteenth-century St Petersburg to a non-specific last-century Russia that ranges from before the Revolution to the 1960s, labours the point of a dehumanising totalitarianism, with the idea of liberty so odd as to be mad – and this is a staging where you could easily think the inmates are in charge of the asylum.

Alden never lets up in tightening the obsession screw through a heavily stylised, glossy expressionism, with touches such as the statues of sword-wielding angels in Gideon Davey’s set design harvesting these damned folk for hell, or minor characters being singled out to reinforce the concept. Perhaps the furry animals in the ball scene were a step too bizarre (although the erotic world of “furries” is explained in the programme), but they are all elements in a familiar visual and melodramatic overload for which ENO is renowned and which observes and objectifies everything – and, boy, was it ever exhausting, nihilistic and locked in. 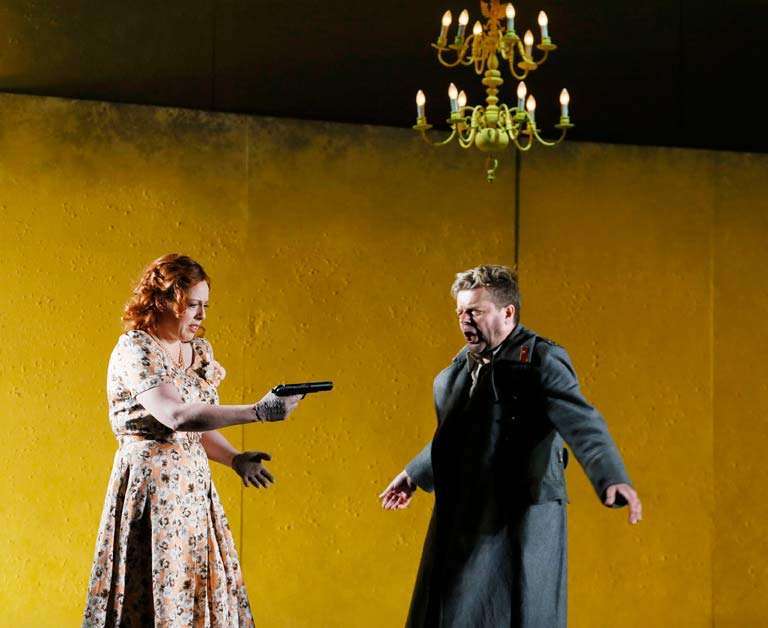 Alden’s concept works well enough in Hermann’s confrontation with the Countess to get the secret of the cards out of her (and which kills her), it made Hermann and Lisa’s love-scene especially pathetic, and stepped back from interfering with the Countess’s wistful comparing the awfulness of the present to the stylishness of her glamorous past, but it was hard for moments of truth, such as Lisa’s betrothed Prince Yeletsky’s famous aria, to register in the phantasmagoric mayhem. The set, which makes much use of a peep-show stage within a stage, reserved for the pastiche ‘Intermezzo’ and the strong supernatural element, when opened out is dominated by a tottering heap of chairs. Despite Alden’s cynical full-on focus on obsession, the staging is so busy that you felt you must be missing something, but you couldn’t deny its panache as the boundaries between fantasy and reality were continually redrawn.

This production is Edward Gardner’s last as ENO music director, and musically it is a triumph, anchoring the excesses on the stage. In probably Tchaikovsky’s most psychotic score, Gardner and the ENO Orchestra delivered the goods with considerable flair, and the retreats into the perfect world of baroque imitation made their mark. The chorus of Soviet militia and their blinged-up molls made an electrifying sound, and the robotic jollity in the ball scene was incisively directed.

Despite an unreliable top voice, Peter Hoare went for Hermann’s addictive personality with a will, a true victim of fate. There isn’t much wriggle room with Lisa’s passivity, but Giselle Allen gave the role a plangent, strongly sung presence. The opera revolves around the mysterious, out-of-time Countess – the once beautiful Venus of Moscow who whored herself to get the secret of the three cards Hermann is so desperate for and who, via some overblown video projections, takes her revenge on Hermann from beyond the grave. Felicity Palmer rose to the Gothic and histrionic occasion with mesmerising, often lovely singing.

The smaller roles were all part of Alden’s overheated brew – an omnipresent, abused, all-fur-coat-and-no-knickers Pauline (Lisa’s so-called confidante) from Catherine Young, very affecting in her parody songs with Lisa, and a splendidly oily and corrupt Count Tomsky from Gregory Dahl, equally effective in his narration of the Countess’s past that sets the plot in motion. Nicholas Pallesen sang Yeletsky’s aria beautifully, and Hermann’s seedy fellow soldiers Chekalinsky and Surin were luridly realised by Colin Judson and Wyn Pencarreg.

The production has terrific momentum and relates well to the music, but even when I gave in to Alden’s conception I was never moved – and I had the nagging feeling that I’d seen it all before. From the singers and the pit, though, this Queen of Spades is exceptional.