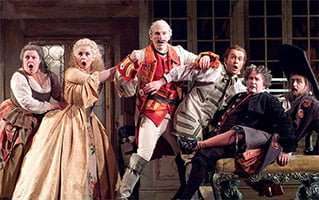 A quarter of a century old, Jonathan Miller’s production of Rossini’s comic masterpiece is something of a national treasure. It can’t last for ever, so catch it while you can. It’s a straightforward, affectionate staging, and the revival director Peter Relton has honoured Miller’s sharp eye for mischief and social pretension. Tanya McCallin’s 18th-century set of a Seville street succinctly sums up the opera’s futile and fortress-like no-entry seclusion, and the way the big front window moves to the back of the set for the interior of Bartolo’s house is neat. 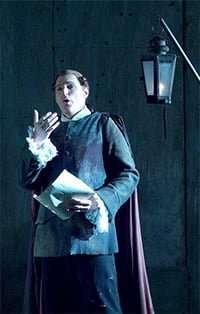 The other reasons not to miss this Barber are Andrew Shore’s Bartolo and Lucy Crowe’s Rosina. Shore is the only unchanged bit of casting from the previous revival in 2008, which is just as well, because his sure comic sense and sharp timing carry the show. He energises the ensembles, has a winning way of involving the audience, has a fine line in outraged bluster, negotiates the bel canto tricks with ease and his diction is blissfully clear. He galvanises the action, and his business with his specs caught in the harpsichord is a joy. He’s matched by Crowe’s sparky Rosina, a ward with warmth and personality to spare, and her lovely, pliant soprano delivered a stream of effortless, sigh-inducing coloratura. Some may prefer their Rosina to be a little tarter, but Crowe’s deft charm and wit and technical security are just the ticket.

Andrew Kennedy as the Count and Benedict Nelson as Figaro weren’t really in the same league. Kennedy’s tenor makes a pleasing sound and by the second Act there was less effort and more beauty to his singing. His characterisation of the Count wasn’t nearly as focussed, though, and you couldn’t help wondering what Rosina would see in her generically genial, vaguely nice-but-dim wooer. He was okay as the drunken soldier and irritating replacement music master, but his comedy lacked bounce. Benedict Nelson needed more weight as Figaro. His wily stage presence convinced you that all Seville revolved around him, but his light baritone didn’t muster the bluff authority and crackling patter essential to balance Bartolo. The crescendo and agility vital to ‘Largo al factotum’ sounded effortful, and in the big Act One finale, the opera’s main man became more of a team player. David Soar’s Basilio was suitably grotesque, although there is more that can be done with the ‘innuendo’ aria. Similarly, the direction of Berta’s aria is surprisingly underpowered – a pity, because Katherine Broderick sung it with sly humour, and she was marvellous in the ensembles.

Jaime Martin, who used to play the flute in the ENO Orchestra and London Philharmonic, could have given the dialogue a bit more impulsiveness, but otherwise his ENO conducting debut had plenty of colour and directness. The Holden translation still works brilliantly.