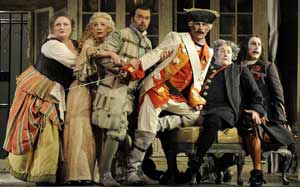 It is not hard to see why Jonathan Miller’s production of “The Barber of Seville”, currently celebrating its 21st-year with its 10th revival at English National Opera, has lasted so long. Arguably Miller’s finest operatic creation, it is, in a nutshell, definitive.

The key elements are the period setting, lively staging sympathetically attuned to the many farcical comings and goings, and imaginative ‘business’ laden with gags which enhance the opera’s sparkling comedy (rather than intrude on it, as is often the case with Miller’s over-egged “The Mikado”). And, in the hands of an excellent cast and superb musical direction, it is still going strong.

Rory Macdonald (making his ENO debut) cuts a stylish dash in the pit, assisted by the Orchestra on excellent form. Displaying great affinity for Rossini’s idiom, Macdonald’s tempi were animated, keeping the pace moving while maintaining superb control: ensemble was near-immaculate throughout, remarkably so in the fast-and-furious numbers (accidents waiting to happen). 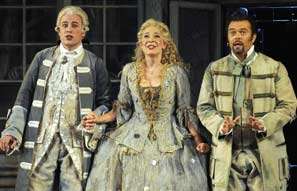 With no stand-out stars, each member of the cast made a sympathetic, well-sung contribution. Anna Grevelius’s Rosina was delightfully capricious and coquettish but, crucially, also displayed sweetness and being likeable. She gave sensitive accounts of Rosina’s two solos, although her attractive voice didn’t have quite enough power to carry in the ensemble numbers. As her sweetheart, Count Almaviva, newcomer John Tessier proved to be ideally suited to opera buffa: his light, clear tenor sailed effortlessly through the demanding virtuosity – not just of Rossini’s vocal lines but of the added difficulty of his own stylish ornaments; and he is well gifted as a comedian.

Garry Magee’s Figaro was appropriately self-assured but Andrew Shore’s peerless Bartolo outshined him in the comic stakes. A highpoint of Shore’s masterful delivery was his furious admonition to Rosina: getting the glasses around his neck caught in the harpsichord strings, Shore’s priceless antics grew ever funnier, all the while expertly projecting some of the most fiendish patter in the repertory.

The witty English translation still sounds fresh – although one does begin to question the wisdom of Rossini in the vernacular during the umpteenth repetition of aria text. Miller’s production includes some evergreen hilarious touches (such as the musicians’ box of TARDIS-like proportions, and the superbly timed removal of the ladder in Act Two), but the single most important ingredient of its success is the reduction of the stage to intimate proportions: the opera’s farce-like aspects are most effective in a confined space, and there is less danger of voices getting lost.

Warmly recommended as a greatly entertaining evening, ENO’s ‘Barber’ is a true gem. If it continues to be as well cast and conducted as its current run, there’s no reason why it shouldn’t continue for another 21 years and more.