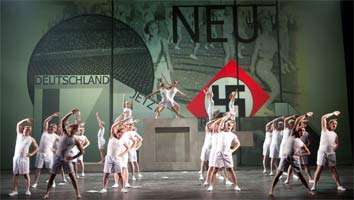 It is, quite probably, Berlioz’s fault. Designating your work a ‘dramatic legend’ and rendering it as a theatrical spectacle outside the confines of the opera house was always going to confuse some and provoke others, the latter in terms of how the piece could be re-envisioned for the stage. Productions of “La Damnation de Faust” are not an unknown quantity – The Royal Opera having mounted one, directed by Harry Küpfer and conducted by no less than Colin Davis, to generally unenthusiastic response almost two decades ago. Could Terry Gilliam, among the most recklessly ambitious film directors of the present, come up with something more convincing? 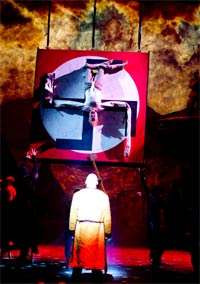 What cannot be denied is that the result is coherent in terms of its laminating a traversal of Germanic culture – from the soul-searching inherent to mid-nineteenth century Romanticism, via aggrandisement and meltdown of the period around the First World War, to the precipitous rise and fall of Nazism – onto the musical context of Berlioz’s music. In terms of how all this can unfold on the stage, moreover, Gilliam has done his homework unerringly – whether in those sets that vividly evoke the pantheistic yearning of an era that came to be typified by the mountain-scapes of Caspar David Friedrich, via the opulence of an era that culminated in the European heads of state charging headlong into a confrontation whose consequences none of them could have foreseen (the sight of them descending into a brawl over the division of empire might be an unexpected complement to the ‘Rákóczy March’, but is far more effective than the march-pasts previously encountered), the drab images of a post-war period that witnessed the execution of the Spartacists on the political Left and then the advent of a far more virulent force on the Right, to the graphic depiction of a society soon in thrall to a National Socialism whose innate destructiveness negated all that culture had embodied over the previous century and more. 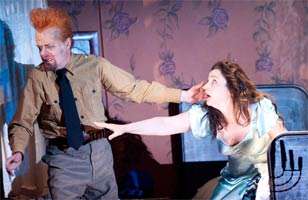 An ambitious conception, then, but one that Gilliam largely justifies in its own terms through the clarity and coherence of his perspective – not to mention the sumptuous set designs of Hildegard Bechtler, the always apposite costumes of Katrina Lindsay, the resourceful and frequently spectacular lighting of Peter Mumford, and Finn Ross’s imaginative superimposition of video footage onto the stage in the numerous passages where Berlioz gives the orchestra its head. It all adds up to a production which amply refutes the charge that English National Opera productions have become under-characterised, because under-budgeted, and so underwhelming. 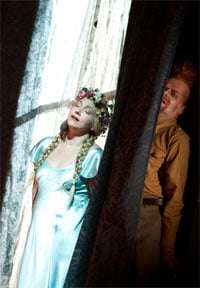 Which, of course, is exactly where this production falls down – Berlioz’s music, as well as his oblique though acute dramatic sensibility, being largely reduced to an accompaniment whose qualities are at best obscured, at worst nullified. Added to this is the failure of the main characters to establish any real or lasting presence in the dramatic scheme of things. True, Mephistopheles makes a believable master-of-ceremonies for all that his sardonic manner proves inflexible across the range of musical guises in which he is presented, but Marguerite is made a victim of circumstance rather than a symbol of virtue (hence the production’s obfuscating over her Jewish ‘ancestry’ and Ayrian ‘appearance’), while Brander is a stereotypical thug pure and simple. Above all, Faust is here devoid of all that might have justified his centrality to the drama: supine, vapid and dull-spirited, such a sorry and pointless figure would hardly have occupied the thoughts of Goethe or Berlioz for a moment.

The singing was a not inconsiderable factor here. Suave and calculating, Christopher Purves was a natural for Mephistopheles as a controlling influence, but his singing seemed almost too refined for the sheer stature of the part to come through. Christine Rice was an affecting Marguerite, limpid of tone in her arias and properly imploring in the love-scene, while Nicholas Folwell was a lively if overly crude Brander. Peter Hoare was a disappointment – his strained tone inadequate for the lyric tenor required and his eccentric manner suggesting he had remained in the mindset of Sharikov from ENO’s production of “A Dog’s Heart” earlier this season.

The chorus acquitted its extensive contribution admirably, as did the orchestra – for all that Edward Gardner’s conducting varied in its perceptiveness. The opening scene had commendable poise and the peasant’s chorus real vitality, though the ‘Rákóczy March’ was overly stolid at its climax. Come the tavern scene and Brander’s songs were a little gutless, then the fugal “Amen” seemed too cautious for its intended irony to be fully manifest, but the ensuing dialogue between Faust and Mephistopheles was ideally paced in terms of its faux-profundity. Equally fine were Marguerite’s two arias (the obbligato viola and cor anglais parts eloquently inflected in each instance), while the Love Scene’s conveying of no more than a modicum of ecstasy was likely as much a visual as a musical failing. The ride on horseback (or rather, as here, motorbike and sidecar) lacked the last degree of remorseless energy, but the ensuing descent into hell was not lacking impact in terms of orchestral response – Berlioz’s demands (over-the-top even by the standards of the music from the first half of his career) met in a scintillating fashion. Nor was the final ascent to Heaven anti-climactic, with Gardner’s lilting tempo offsetting any risk of sentimentality. Whether the Holocaust connotations were justifiable is, of course, another matter.

No-one who knows the slightest thing about Gilliam’s films would have expected this production to be other than provocative, and so it proves. Whether it is insulting in its associations is more arguable, given that the mise en scène has been so completely and, in terms of its scenic realisation, capably thought through. Whether it clarifies or is even relevant to this already singular interpretation of Goethe is something else again: at times verging on the crass, if without descending into outright tokenism, it is certainly not for those who are sure that Berlioz’s conception is not for staging in the first place. Those more equivocally inclined should give it a try.