John Adams
The Death of Klinghoffer – Opera in two acts and a prologue to a libretto by Alice Goodman [sung in English with surtitles; London stage premiere & world premiere of this production] 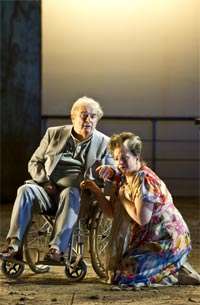 Despite some useful pre-opening, publicity-generating news stories about potential demonstrations, the first night of Tom Morris’s new production (with the Metropolitan Opera, New York) of John Adams’s 1991 terrorist opera went off without a hitch. The librettist Alice Goodman has been trenchantly criticised for showing the four PLO terrorists, who in 1985 hijacked the Italian cruise-ship the Achille Lauro, in too sympathetic a light, at the expense of Leon Klinghoffer, the crippled, elderly American Jew whom they murdered and whose body they threw overboard. Both she and Adams were accused of being artistically opportunist, even though Adams makes his stance over Israel crystal-clear in the extract from his autobiography, reprinted in the programme.

For those expecting the grandeur and expansiveness of Nixon in China, Klinghoffer is a much more oblique, less confident affair, and Tom Morris’s elaborate production cannot help but reduce weaker, formulaic elements in the score to soundtrack status. Morris is also unequivocally realistic about the terrorists and their violent, chaotic volatility, and is just as straightforward about good-guy, plain-spoken Leon Klinghoffer. 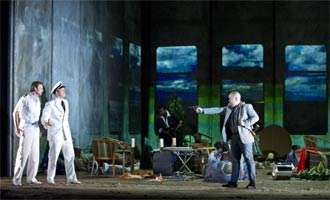 Adams has spoken about the example of the Passion story on Klinghoffer. Morris has taken this to heart, setting up precisely defined layers – Jews and Palestinians in exile and in conflict, the Captain reliving the hijacking at a hearing (though it is unclear why this was being held in London in 2004, according to the video projection) and the events themselves. Then he blurs the layers, and creates an open-ended floating world, where you’re not sure where myth ends and reality begins. It is a very cinematic process, with quick dissolves in and out of scenes, dream-like video projections and a set that easily adapts to the ship or Middle Eastern desert or the concrete barriers separating the two nations. The staging also diverts attention away from portentous, mannered bits of the libretto and gives the music plenty of space to establish its chugging undertow of unease and dread.

I’ve seen the role of Omar, the 17-year-old terrorist (the others were in their twenties), sung by a mezzo, in a bizarre referencing to trouser roles such as Cherubino. Here it is danced, very well, by Jesse Kovarsky, and Omar’s Act Two aria is sung by a Palestinian woman, presumably his mother, which suggests that the desire for vengeance and holy martyrdom is handed down through generations. There is also a big cut – the chorus telling the Old Testament story about Hagar and the angel that opens Act Two, which takes the story about the conflict back to its root. As in the Channel 4 film of the opera, the murder itself is powerfully realised, a mesmerising blend of dance and time conflation.

The singing was uniformly good, led by Christopher Magiera’s Captain, Alan Opie’s excellent Klinghoffer and Edwin Vega’s Molqi, and there are fine cameos from Lucy Schaufer as the Swiss grandmother, Kathryn Harries as the very opinionated Austrian woman, and Kate Miller-Heidke as the ditzy British dancing girl. The ENO Chorus was on top form, and Baldur Brönnimann and the ENO Orchestra reveal acres of closely scored detail. Unlike the consoling end of the Bach Passions, Klinghoffer closes with the inconsolable wife’s lament, searingly sung by Michaela Martens in music that doesn’t hedge any political bets.

As far as history, politics and ideology are concerned, The Death of Klinghoffer isn’t in the same defining league as Nixon in China or Doctor Atomic, but ENO, with the composer in attendance, has still done it proud.