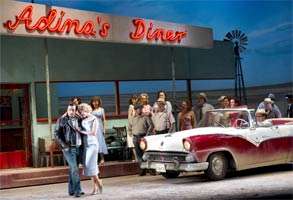 English National Opera’s 2011-12 season opens with the first revival (directed by Elaine Tyler-Hall) of Jonathan Miller’s winning staging of Donizetti’s The Elixir of Love, which was new to ENO in February 2010 and is shared with New York City Opera and Royal Swedish Opera. Miller attended this revival’s first night.

The updating from Italian village farm to Adina’s Diner in the American Midwest in the 1950s is one of the best of Miller’s updatings – although, so far, nothing beats his Rosenkavalier – and requires far less audience adjustment than his Rigoletto. Isabella Bywater’s set of Adina’s Diner, which rotates to show its interior and exterior, is a precisely observed temple of everyday 1950s’ design, these days so chic and retro; the diorama backdrop of empty desert isolates the action perfectly; and the vast sky looks threateningly capable of producing a life-changing tornado – which it does in the form of Dr Dulcamara, who blows in with his dodgy love-potions in a past-its-prime Cadillac Convertible. 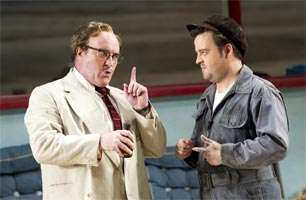 Donizetti’s opera about unrequited love has a special innocent charm – and the 1950s era, especially the American 1950s as perceived through envious post-war English eyes now seems impossibly innocent and wholesome; but it’s also a very tight piece with nothing going to waste, and Miller’s production is just as tight. The other big factor in the updating is Kelley Rourke’s English libretto, billed as an adaptation (rather than a translation) and full of Americanisms such as “lay it on me”, “listen up” and many more vernacular time- and sound-bites, with some cautious American accents from some of the singers, but convincing enough.

Ben Johnson (a notable Novice in Glyndebourne‘s Billy Budd) is a great success as Nemorino, cast here as a love-sick, hick garage mechanic, but without being a rural half-wit in whom Adina could have no interest at all. He sang a touching ‘Una furtiva lagrima’ of unexpected pathos, in the course of which Nemorino realises he’s in there with a chance. As well as his lyrical singing, Johnson also looked the part, not so much anonymous as overlooked, and with a brave little Elvis quiff indicating that he’s at least trying to make the best of himself. 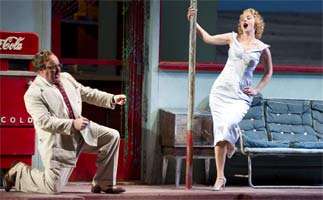 Sarah Tynan has returned to Adina with even more of a Marilyn Monroe wiggle, and singing with a beguiling edge to some nimble coloratura as well as delivering a brilliant Andrews Sisters send-up. For a blonde not lacking in pragmatic determination, Adina’s self-confession that she has loved Nemorino all along was very touching – and it’s brilliant that she’s the last to discover that she’s got much more than she bargained for in Nemorino (the inheritance). Sarah Tynan is a delight as Adina – she owns the role.

Also from the original cast, Andrew Shore reprises his Dulcamara, the quack potion-seller who inadvertently changes everyone’s lives. Shore plays him rather like Stubby Kaye in Guys and Dolls with a bit of Frankie Howerd-style ‘ooh missus’ innuendo for added interest. His patter is marvellous, as is his diction (just as well, since the surtitles failed at one point) and his comic timing is perfect. No slouch as a comic actor and singer, this is Shore at his considerable best.

Belcore, deftly manipulated by Adina to be Nemorino’s near-nemesis, is played in true Elvis-as-GI style by Benedict Nelson, superbly oleaginous as God’s gift to all womankind, and if his singing had had as much swagger as his acting, Nemorino wouldn’t have stood a chance.

The best of the chorus’s singing and acting came in the comic highlight in which the women, led by Ella Kirkpatrick’s sexy and sparky Gianetta (Adina‘s best friend), are the first to hear of Nemorino’s inheritance and are accordingly the first to revise upwards their opinion of him, and elsewhere there is plenty to watch out for in the incredibly detailed direction. Rory Macdonald’s lively conducting secured bright playing and an immediate rapport with the singers; he clinched a thoroughly enjoyable and involving evening.