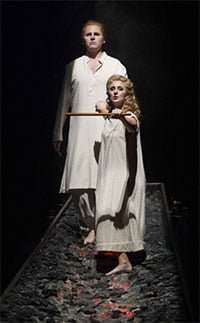 This really is the beginning of the end … no, really … apparently! The last time I wrote about a revival of English National Opera’s 25-year-old production of The Magic Flute directed by Nicholas Hytner (in October 2007) it was billed as the “last ever chance” to see this beautiful staging. That has now proved to be incorrect, twice! It was revived again in January 2009. Why ditch such an appealing and timeless staging?

Everything in this latest run of performances works well: the lighting is affectionately revived by Ric Mountjoy; Bob Crowley’s sets – evocative with minimal fuss – look fine; and Ian Rutherford and James Bonas direct the action (after Hytner) with aplomb, the story ticks along, avoiding this opera’s episodic nature, with everything fizzing nicely. We feel the lovers’ plight as they seek to purify themselves through the three tests, and we are happy when everything works out for our enlightened protagonists. It is ridiculous to discard what works so well. 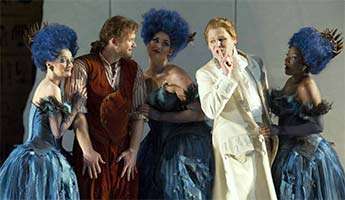 Presenting Papageno as the guide through the characters’ trials and tribulations is Duncan Rock, whose witty asides engaged and brought much humour. He relished the role – though was surprised when a female audience-member answered a plea of his! – and sang with beauty, bringing charming innocence to our ever-cheerful bird-catcher. Tamino is much more serious: noble and dutiful. Shawn Mathey’s voice was black-and-white occasionally, especially so in the love-song to Pamina’s portrait; Act Two was much more secure for him. The object of his affection, Pamina, was sung warmly by Elena Xanthoudakis: her aria during the ‘Second Test’ (not cricket!), Tamino having rejected Pamina, contained beauty within sorrow – and it was very seductive, surely enough to melt the Prince’s heart.

Robert Lloyd, a Sarastro veteran, is cast ideally; his strong bass resounded with unforced benevolent authority. Adrian Thompson’s Monostatos is a slimy creation, and his attempt at seducing Pamina was deftly handled, with layers of lasciviousness in his voice. Rather delicious! The other ‘evil’ one, the Queen of the Night, was mixed for Kathryn Lewek: her Act One aria was a little tentative, but her coloratura had a sensual energy that verged on the orgiastic and was aptly melodramatic. However, that (devilishly-difficult) aria from Act Two had an insouciance that fitted-ill with it, and there was slight struggle at the top.

Of particular note were the Three Boys, who sang with rare, superb quality: diction and tunefulness at their command with a supernatural quality pervading their presence. The other trio, of Ladies, was not quite in the same league, but their sparring over Tamino raised a few chuckles.

Nicholas Collon raised his baton and produced a reverential Overture; he nurtured the score but sometimes the notes were sounded in strident fashion. The assembled chorus of Sarastro’s Community, Priests, and Slaves sang with good voice. By the end one was uplifted by what is a paean to the human endeavour for true love. That the pantomime aspects work so well here in contrast with the opera’s deeper meanings and explorations of Enlightenment must surely be grounds for sticking with this endearing production. It is indeed a “Classic Revival”.