Mozart
Die Zauberflöte, K620 – Singspiel in two Acts to a libretto by Emanuel Schikaneder [sung in an English translation by Stephen Jeffreys, with English surtitles; a collaboration with Complicite; co-produced by ENO, De Nederlandse Opera and International Festival of Lyric Art, Aix-en-Provence] 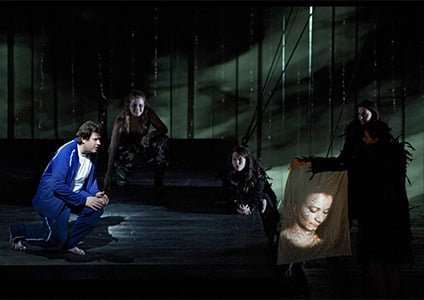 A sense of anticipation hung in the auditorium before the start of this first ENO unveiling of Simon McBurney’s direction of Mozart’s The Magic Flute. After many last-chance-billed opportunities to see Nicholas Hytner’s venerable production, the curtain came down finally on that 25-year-old production on 18 October 2012, to be replaced with this new co-production, first seen in Amsterdam in December 2012.

It is difficult to work out quite what world the characters inhabit in this creation by McBurney and his Complicite design team: it is not a mystical setting, but something contemporary, with suggestions of bunkers and war-planning. The Three Ladies are donned in camouflage gear; Tamino is a fairly scruffy ‘ordinary man’; our guide and help Papageno is a bit of a louche with a heart of gold (Northern accent to the fore during dialogue, irritatingly so); the Queen of the Night is a bit of a cripple, firstly as a Countess figure, then in a wheelchair (Cornelia Götz coped valiantly during her aria whilst manoeuvring it in a sandpit); Monostatos is a repulsive lecherous man; and Sarastro seemed, in business attire, to be running a company from a boardroom, his followers similarly dressed. It is all rather confusing: never does one get to know exactly who these people are and what they are doing. The Three Boys (here Three Spirits) are presented as emaciated and old (terrific costumes highlighting the skeletal features), but they are hardly inspiring. 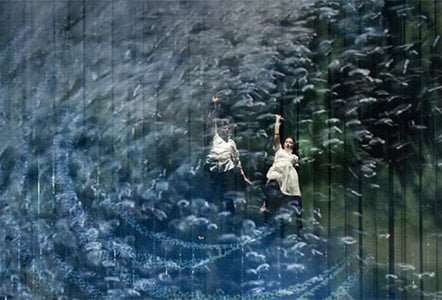 A lot of gimmickry is on display. The orchestra pit is raised (the music is as much a part of the action as what transpires on the stage, don’t you know!), a sound-effects man is in a cubical stage-right, and a camcorder captures images from a table stage-left that are used for the front- or backcloth. Oh, and there is the so-hip invasion of the audience by a few characters wandering down rows of patrons. The set design itself is impressive, as are its constituent Elements, but they do not add up to a whole. A bare stage with video projections, it is enjoyable certainly, but puzzling as one tries to find a thread from scene to scene.

Also lacking is a heart: one hardly cares for these characters, as they are barely seen in any decent light, physically or metaphorically. They come and go, and the lack of dramatic focus limits the production’s communicative power. It is a shame that the singing was underpowered with only occasional moments of brilliance, the characters ambled about with little suggestion of what was going on. The Three Boys’ efforts were strong; a beautiful sound to caress the couples on their way. And the Chorus produced some glorious and rousing sounds. But the solo singing fell below international standards, perhaps not helped by Gergely Madaras’s insistent conducting. There was some wayward ensemble between singers and orchestra.

This Magic Flute came and went, with too much focus on stage effects rather than the characters. It’s a crying shame that a production that served this opera so well has been ditched for something that does not seem to care for this glorious work.