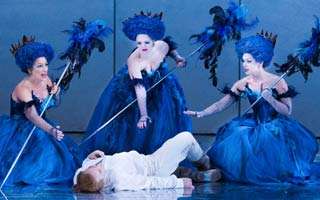 The opening night of “The Magic Flute” (Die Zauberflöte) marks the beginning of the end: these are to be the final performances of this renowned production. Its loss should be mourned. What this ‘Flute’ does is tell the story in a straightforward way whilst preserving the fantasy and wonder of the work that enraptures this reviewer as much now as before. The stage is bare save for decorative structures surrounding the central performing-space; quite refreshing in simplicity. The plot, though, is ridiculous – a vehicle for the theme of Enlightenment. The trial of two lovers in order to purify themselves and the psychological struggle they endure, ending with Tamina’s lover, Pamina, being initiated as a priestess, is nothing short of a revolution in thought, and having had a director and a designer willing to stage the work so as not to distract from these themes does a great service. There is a lot of comedy, provided by the pantomime character of Papageno, who, in a boorish sense, affects a ‘Northern’ accent in the speaking parts, with “bloody hells” of surprise sprinkled quite liberally throughout.

Musically, the cast fulfils their roles and hit the right notes, but the depth of emotional contact with some of the words is doubtful. In The Queen of the Night’s Act Two aria, full of coloratura, the notes are struck but it was too light. Her gift of seductive charm (really duplicity) was to the fore at the start, however, in her plea to Tamino, “O tremble not, fear not, my son.” The other main soprano part, Pamina, is earthier, and in “Ah, I know it, all is gone now” (a response to the trial in which Tamino cannot speak to his love) Sarah-Jane Davies achieved heart-breaking pathos for her great sorrow. The three boys, a different ‘set’ from the advertised three, vocalised well, providing soothing guidance for our heroes in their trials. The other group of three (‘three’ is an important Masonic symbol), the three Ladies, are captured in vivid detail, and their yearning for Tamino at the opening hilariously carried off. 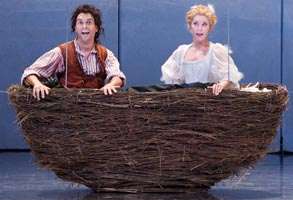 Andrew Kennedy is a consummate stage performer, easily conveying the wide-eyed naivety of Tamino and his progression to Enlightened Man. Vocally, he is the strongest member of the cast, his diction precise and his singing seductive, indeed, his Act One aria “How sweet, how fair this likeness is” is full of wonder and anticipation. As part of an ensemble of singers, Kennedy was the natural leader, appropriately dominating the quintet “What is this? You here in this awesome place?” where the three Ladies appear as part of the trials to trick him and Papageno into speaking. The boorishness of Roderick Williams’s Papageno provides comic-relief, ably acted the bumbling fool to great effect; and fine singing, too. Like his sweetheart, Papageno exemplifies the earthy pursuits of Man, singing of Man’s want of simple love and happiness. “For a maiden woman doth Papageno yearn” begins his final aria, which found Williams having some difficulty in shaking off the silliness of his role and unable to express fully the sadness and yearning of his feelings.

When Sarastro is revealed to be kind and benevolent, the parallels with Titus from Mozart’s next (final) opera (“La clemenza di Tito”) are obvious. The compassion in Brindley Sherratt’s voice and his desire for reform were given noble quality by his peaceful and authoritative words; at the end he sang “The sun’s golden splendour now sunders the light” and everyone was reassured. As guides for the two heroes, the Two Priests (also the Two Armed Men) served their scenes well.

In the pit, Martin André conducted the music ingenuously, with no wayward intervention. In reality, the singers seemed to lead him, but volumes were apt to this space, with the singing given prominence. For anyone in search of fantasy and good music, this is an excellent night out and not to be missed.