Janáček
The Makropulos Case – Opera in three acts to a libretto by the composer after Karel Čapek’s comedy Věc Makropulos [sung in an English translation by Norman Tucker, with English surtitles] 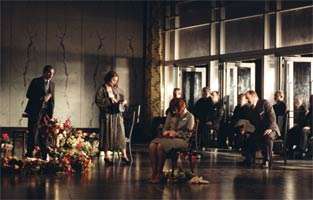 This run of revival performances of Christopher Alden’s 2006 production of Janáček’s opera “The Makropulos Case” was dedicated to the late Sir Charles Mackerras, who conducted the first run (recorded by Chandos) and who did so much to champion the music of this composer (amongst many others), and whose scholarly work on the scores removed some of the accretions of their short traditions and revealed so much of the composer’s original intentions. A photograph of Mackerras was projected onto the black front curtain as the performance started – an affecting reminder of a long life well lived.

Of course, the heroine of this opera has had an even longer life when we first meet her! Alden’s production shows us that certainly in the latter part of her 337 years she has started to live that life less well, increasingly at odds with a world full of people who she cannot get to know. The title role is an absolute gift for a singer with good stage presence and acting ability. Amanda Roocroft demonstrates she has these in abundance. Emilia Marty’s various facets are convincingly melded into a credible whole. So we get the single-mindedness, the self-awareness, her manipulative qualities, the boredom, and the desperation and occasional panic engendered by the sensation of beginning to feel ‘old’. What Roocroft also brings out are the comic qualities – Čapek’s original play is, after all, a comedy – and Emilia Marty’s many throwaway lines such as “So he’s dead then? Poor fellow! No one ever told me” when talking about a long-dead relative are delivered in an amusingly deadpan way. Her nonchalance on being challenged by Baron Prus about her complicity in his son’s suicide is as uncomfortably funny as it is shocking. Her occasional nastiness is completely believable. She also looks great in the costumes and has distinctive deportment. Janáček’s nervy, restless and conversational music and vocal lines continue to suit Roocroft perfectly too, and her diction is strong. 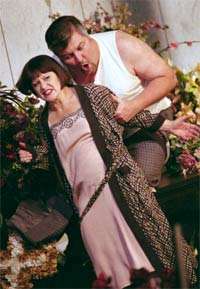 This great central performance is surrounded by some excellent portrayals in the supporting roles, and probably stronger than in the original run. Andrew Shore provides a vivid Dr Kolenatý of both legal precision and bluster, almost aggressively direct in his questioning of Marty in Act Three. Alasdair Elliott’s is an excellent foil as his clerk Vítek. As Baron Prus, surely one of opera’s most unsympathetic and unpleasantly predatory fathers, Ashley Holland dominates his scenes, and Peter Hoare makes much of Albert Gregor’s unhinged qualities. In their different ways both these men are trying to use Emilia to win their causes as much as she needs to manipulate them to get hold of the Makropulos formula. The more-sympathetic characters of Kristina and Count Hauk-Šendorf are vividly brought to vocal and theatrical life by Laura Mitchell and Ryland Davies. The latter provides a great cameo right down to his curtain-call appearance. The uniform quality of the whole cast really stands out here, and they serve Alden’s direction well. 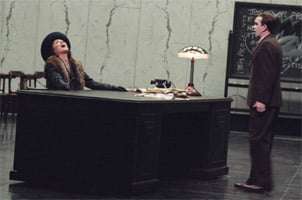 Alden and his design team come-up with some arresting visual images – particularly in the later acts. Emilia Marty lying motionless, corpse-like after her assignation with Prus is one such example, the inclusion of floral crucifixes and funeral-flowers amongst the bouquets bought by adulatory fans of the operatic diva in Act Two making their point well. Alden also brings Marty’s apparent indestructibility to the fore too – the passage where she describes the scars of previous attempts to kill her came over strongly. The images of many extras just going about their short lives in the midst of the protagonist’s longer one is also effective, although their vocal contributions are surely meant to sound offstage – especially in the final scene. Roocroft’s acting of the opera’s final moments showing Elina Makropulos fighting with the document she has so long sought is also potent.

There are some miscalculations though. Roocroft’s performance might have been even more vivid had she not had to sport sunglasses though the first part of the first act. Perhaps the idea is for us to project our ideas of what Emilia is and is like before we really see her eyes. The use of the blackboards is distracting. And, arresting though the final few minutes certainly are – they are not what the composer intended (Janáček modified Karel Čapek’s original ending quite considerably for his own version). Is not Kristina supposed to consign the formula to a candle flame?

Sir Richard Armstrong, making a welcome return to ENO, gives us a vivid, well-paced and taut account of this wonderful score aided by the ENO Orchestra on blistering form. Janáček’s composition is full of recurrent thematic snatches that are seldom developed, as if to emphasise that normal life is too short for this. The flashes of warmth and romance emerge with their requisite colour, and offstage brass provides wonderful echoes of Emilia Marty’s past existences. Elsewhere the strings bring a tense astringent quality for much of the accompaniment. In such a wordy opera one needs to listen to the text closely and Armstrong allows one to do that whilst still allowing the many orchestral felicities their necessary prominence. He certainly has the overall sweep and theatricality needed. The evening provides a revival fully worthy of its dedicatee.