The Mikado, or The Town of Titipu – comic opera in two acts with music by Arthur Sullivan and libretto by W. S. Gilbert 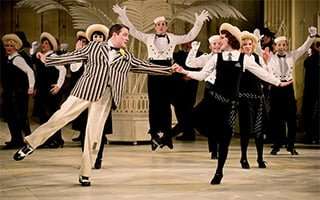 Jonathan Miller’s 1930s seaside-hotel setting of Gilbert & Sullivan’s The Mikado makes a familiar return to English National Opera. Just over 127 years since its record-breaking premiere of 672 performances, this comic opera remains the collaborators’ most popular work, and not without reason. W. S. Gilbert’s satire of British politics and institutions remains relevant, with phrases such as “A short, sharp shock” and “Let the punishment fit the crime” appearing on many a politician’s lips.

The Mikado, the ninth of the fourteen Savoy Operas by G&S, was almost not written. Sullivan, when asked by Richard D’Oyly Carte to pen something new, replied that “it is impossible for me to do another piece of the character of those already written by Gilbert and myself” saying to Gilbert, who asked him to reconsider, that he had “come to the end of my tether” with the operas. Sullivan eventually relented and the show opened on 14 March 1885. It was an immediate success. 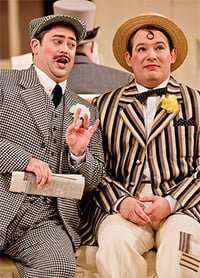 Jonathan Miller does an excellent job of transforming the mock-oriental Town of Titipu to Japanese ‘riviera’ that is more English than exotic. Indeed this was Gilbert’s intention, capitalising on the then fascination of all things Japanese. G. K. Chesterton went further, saying “I doubt if there is a single joke in the whole play that fits the Japanese. But all the jokes in the play fit the English”. ENO’s production, in its twenty-sixth year and numerously revived, comes up as fresh as the first – sparks of genius are scattered generously through the show.

Richards Angas and Suart repeat their familiar roles as respectively the Mikado and Ko-Ko (Suart nearly as long-running as the production), slotting back into the parts like well-loved and comfortable carpet slippers. Suart’s ‘little list’ is as contemporary as ever, updated to include references to the Leveson enquiry (“I’ve got him on my list, in case I’m on his list) as well as Starbucks and its reluctance to pay UK taxes. Suart, the master list-maker, took a deliberately slow pace to ensure that every word was clear; unfortunately this was not the case elsewhere as tempos were largely too quick for Gilbert’s intricate prose, even allowing for the superbly clear diction from the principals and chorus. At least surtitles were in operation for those new to the piece. 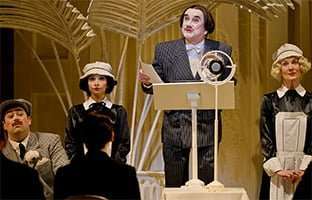 Mary Bevan and Robert Murray’s interpretation of the young lovers is superbly sickly sweet (think Jane and Timothy from Salad Days) contrasted with occasional moments of sublimity that lift the characters out of the 1930s context. Bevan, like her sister Sophie who sang the role in the 2011 revival, is delightful, delivering clipped sounds that would not be out of place in a Herbert Wilcox film. Yvonne Howard as the mostly ugly Katisha was a perfect mix of glamour and haughtiness that dovetailed well with Angas’s ‘humane’ Mikado. Donald Maxwell’s Scot’s Pooh-Bah, effective at the start, became ponderous and less comedic as the night progressed.

While much of the original production and many of the dance numbers remain intact – including the magnificent Stefanos Lazaridis cream set – some extras have been added (though I may have missed them in the past) such as the Bonsai-clipping bell-boy and chamber-maid antics that accompany the madrigal. Attention to detail is astoundingly good. David Parry and the ENO Orchestra are on the whole sympathetic accompanists, though occasionally their exuberance bullied a sensitive solo (Kasisha’s ‘Alone and yet alive’ for instance); no doubt problems of balance will quickly be ironed out.

After many revivals, this production glistens like new (Jonathan Miller was in attendance on this occasion) and is a welcome alternative to the Christmas pantomime.