The Mikado, or The Town of Titipu
Operetta in two acts with music by Sir Arthur Sullivan to a text by W. S. Gilbert 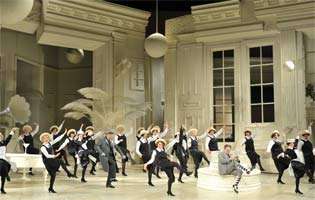 I think this is the fourteenth outing of Jonathan Miller’s blockbuster of a production of “The Mikado”, which has tuned-up as fresh as paint for this 25th-birthday run. The late Stefanos Lazaridis’s fabulous bright, cream set of a 1930s grand-hotel lobby is a delight, the choreography meticulous, knowing and witty, the costumes similar, all of it geared to a sort of Salad Days innocence and fun. Except that, with the director being Jonathan Miller – who was casting his sardonic presence over the first night – this “Mikado” is also quietly subversive, dispensing with any fake Oriental nonsense and cutting straight to the chase of sending up the foibles of British ‘values’. And, in competition with a plethora of jazz/Texan/cool/black/gender-bending Mikados, this opulent staging holds its own brilliantly – and, as David Nice points out in his programme-book article, we should remember that the Japanese costumes of the original Savoy stagings were still doing duty in the 1980s, when Miller’s production first burst forth. 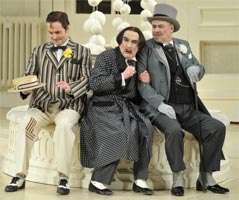 On hand to provide continuity for this ENO stalwart are “Mikado” veterans Richards Suart and Angas as Ko-Ko and the Mikado. Suart’s Koko ranges from Groucho Marx, through Max Wall to Monty Python, with a huge range of tics, impersonations and accents. His ‘little list’ summarily deals with an impressive array of contemporary horrors – the Bercows, Middle-Eastern real-life lord high executioners, Jacqui Smith, bunga-bunga Berlusconi, Elton John and his instant family are all fingered – and he works the audience with manic glee.

Richard Angas’s Mikado is an awesome creation, with the sublimely weary and polite indifference of a royal despot uneasily coupled with a flickering alarm and distaste for the predatory Katisha. The latter is played by Anne Marie Owens, a fine comedienne and singer, who could turn up the volume of Katisha’s grotesqueries as much as she likes.

In a production where the mangled vowels of received pronunciation run riot, the Scottish variables of Donald Maxwell’s Pooh-Bah (think Gordon Brown and Miss Jean Brodie) are in a league of their own. I look forward to hearing the impressive contralto of Claudia Huckle (Pitti-Sing) in a bigger role; and Sophie Bevan caught the admittedly not very subtly drawn preoccupations of Yum-Yum – self-interest, parties, the main chance, more self-interest – in great style, sweetly and openly sung. For those used to Nanki-Poo as the nice-but-dim prat of previous revivals, it wasn’t clear where Alfie Boe was going with the role, but his singing was lyrical and powerful.

The slight grizzle that a lot of the spoken dialogue doesn’t penetrate much beyond the front of the stalls aside, this was a terrific revival, conducted with a fine ear for comic effect and dramatic timing by Peter Robinson.