Vaughan Williams
The Pilgrim’s Progress – A Morality in a prologue, four acts and an epilogue to a libretto by the composer after John Bunyan’s allegory of the same name, with interpolations from the Bible and verses by Ursula Vaughan Williams [Sung in English with English surtitles] 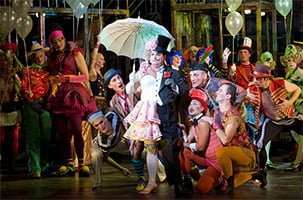 It’s been a long wait for a fully-staged professional revival of Ralph Vaughan Williams’s ‘morality’ but here, finally, is a production worth its salt. English National Opera, which has endured widespread criticism in the John Berry era for throwing under-qualified directors at the operatic wall (some sticking, rather more coming unstuck) has made the canny decision to engage Yoshi Oida for the task of reawaking a work that has been pretty much neglected, barring the odd semi-staging and a couple of recordings (conducted by Boult, EMI, and Hickox, Chandos), since its 1951 unveiling at the Royal Opera. Oida is no stranger to British music: he mounted a well-received production of Death in Venice at Aldeburgh five years ago (due to be revived in 2013 for Britten’s centenary under the auspices of Opera North), while I have never forgotten his flawless staging of Curlew River at the 1998 Aix Festival, given around the courtyard fountain of an hôtel particulier. Add a growing portfolio of core repertoire productions and this affable, elderly Japanese actor-director is a smart choice for a work that would die a death if staged too literally. 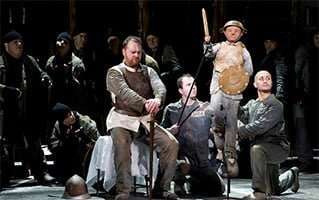 John Bunyan’s tale predates Voltaire’s Candide by several years. It is the allegorical Yang to the Frenchman’s satirical Yin. Both novels are episodic and boldly original, sitting above realism and beyond easy categorisation. While the Frenchman’s work is cynical and picaresque, The Pilgrim’s Progress is its good-hearted cousin; and that open, trusting quality is well captured in the warmth of Vaughan Williams’s burnished score. With its symphonic sweep (sharing musical material with the compassionate Fifth Symphony) and richly descriptive choral writing it is more an oratorio than a work of theatre, but in an era when Saint Matthew Passion and Messiah are ripe for dramatising this is not a characteristic that should place it beyond the operatic pale. Oida’s solution is to locate the drama deep within the mind of a condemned prisoner in his cell, and to track Bunyan’s episodes like so many dreams. Thus Vanity Fair is a lurid sexual fantasy while the scene of the Delectable Mountains is rendered, with devastating power, as a slow march to the scaffold (in this case an electric chair). It takes Oida a while to cut a swathe through the work’s inherent dramatic inertia, but when he does so he achieves miracles. 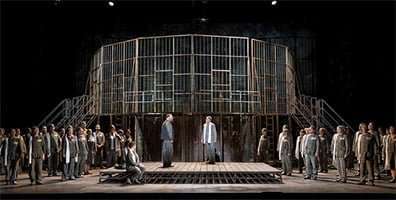 In an autumn of dream-quests at the Coliseum – first The Magic Flute, then Julietta, now this – musical excellence has been in the vanguard, and the vast forces that have been harnessed by ENO for The Pilgrim’s Progress combine to a staggering level of distinction. Leading the way under Martyn Brabbins’s assured and purposeful conducting is Roland Wood, outstanding as Pilgrim (Vaughan Williams’s own, more universal, reappellation of Bunyan’s ‘Christian’). The burly baritone dominated the stage while rarely leaving it, delivering a vocal performance of presence, power and authority allied to a deeply-considered and moving portrayal of an impossibly emblematic character. I have not seen a finer central performance on any stage this year.

The strength in depth of the supporting cast took the breath away. Young singers of proven calibre such as Aoife O’Sullivan and Alexander Sprague stood shoulder to shoulder with the distinguished likes of Ann Murray and Tim Robinson in a variety of character roles. There was an especially powerful intervention from George von Bergen as the Herald at the start of Act Two and an enchanting cameo from Kitty Whately, making light of a throat infection, as a prison dinnerlady (originally ‘A Woodcutter’s Boy’) in Act Four. It was, however, the splendid ENO Chorus who stole scene after scene with some wonderfully drilled, sensitive singing, for which chorus-master Martin Fitzpatrick fully deserved his roaring ovation at the end.

Tom Schenk’s vivid, fluid designs evoked a host of dream-like locations while never removing us from the prisoner’s environment. Half a dozen interlocking stage elements and a handful of metallic stepladders were moved by company members from one configuration to another during musical interludes (which the ENO Orchestra played with heartfelt engagement); as with Oida himself, their work was discreet, elegant, purposeful and full of surprises.