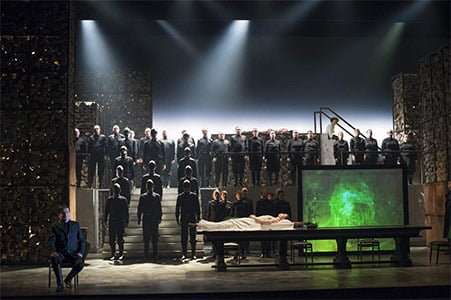 Like Brahms with the Symphony, Julian Anderson has kept his powder dry with opera, waiting until his late-forties to produce his first – Thebans – which, to Frank McGuinness’s libretto, compresses Sophocles’s three Oedipus plays to an Act each, the whole coming in at a terse two-and-three-quarter hours, including two intervals.

Artists have been quarrying this ancient fable of Oedipus caught in a hermetically sealed trap of inescapable predestination as a springboard for any number of interpretations. Anderson and McGuinness play a straight bat, avoiding accretions of myth, ritual and modern psycho-analytical dwelling on archetypes in a way that makes it easy to understand the sturdy stories’ potential for generating such layers of meaning.

The result is very impressive – intelligent, ambitious, the most assured contemporary opera I’ve seen on the ENO stage in years, and one that is magnificently shaped by the grandeur of Pierre Audi’s staging. Audi, making his ENO debut and working in London for the first time in more than a quarter of a century, has made only one, very telling directorial intervention, which neatly supports Anderson’s and McGuinness’s decision to reverse the chronological order of two of Sophocles’s plays, so that ‘Antigone’ comes before ‘Oedipus at Colonus’, which in Thebans returns Oedipus centre-stage. 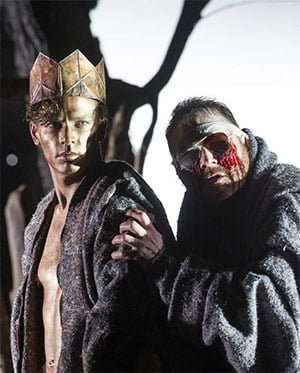 The holy place of vines and olive groves, where the blind Oedipus wishes to die, is in fact a wasteland, and characters who died in ‘Antigone’ return to life in Act Three, thus very directly putting the story’s time-bending, myth-making process in gear. Dramatically this time-distortion makes complete sense, and the blurring of reality is triumphantly evoked by the staging.

The architectural massiveness of Tom Pye’s set says it all about Oedipus being caught between a rock and a hard place, the desolation of the Act Three set has an eerie Paul Nash-like sense of tragedy, and Lysander Ashton’s subtle video projections instantly evoke the ghostly half-world between life and death. The staging is objective, but it doesn’t erect barriers between story and audience – less Stravinsky angular monumentalism, more the human scale Pasolini achieved in his film version of the first of the plays.

Anderson’s music is wonderfully accomplished, illuminating characters and libretto with mercurial aptness, knowing when to retreat and when to dominate, and giving a special charge to the doom-laden atmosphere. It’s also recognisably English, with echoes of Britten’s clarity and sympathy to words and Tippett’s energy underpinned by a strongly rhythmic propulsion, and the solo vocal lines are always singer-friendly and don’t sound imposed onto the orchestral surface. As you’d expect from this master of choral writing, the choruses, vital to the drama, are superbly written, and sung, and Edward Gardner’s galvanising conducting and the ENO Orchestra did full justice to the generous invention of the score.

Roland Wood was pleading a throat infection, but it didn’t really register any lack of vocal restriction in a performance of considerable stature – spellbinding as Oedipus becomes aware of the catastrophe enfolding him in Act One, terrifyingly moving in his death in Act Three, which Anderson’s music matched in intensity. Susan Bickley’s Jocasta was similarly alive to her unwitting connivance in her husband/son’s primal but desirable sin. Peter Hoare has a gift of a role as Creon (Jocasta’s brother) and put his urgent tenor to fine use in his portrayal of self-serving corruption. Baleful Tiresias, the male seer in female form, had Matthew Best at his most sonorous, and Julia Sporsén’s passionate, incisive Antigone gave Acts Two and Three a thrilling sense of obsession and tragedy. Countertenor Christopher Ainslie was on great otherworldly form as Theseus, and there was a particularly strong Haemon (Creon’s son, in love with Antigone) from tenor Anthony Gregory.