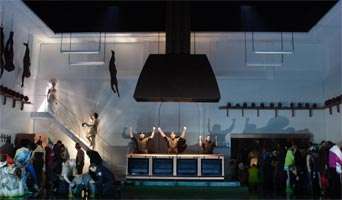 English National Opera is “taking a fresh look at core classics” this season. Well, if this “Turandot” is a sign of things to come, it might be better to reassess future offerings. There are plenty – too many – ideas on offer in this staging but it is all very distracting and takes away from the opera’s dramatic focus.

The Emperor’s court is a Chinese restaurant (the “Imperial Palace”, obviously!), populated by all manner of caricatures – clowns, a Chelsea Pensioner, Michael Jackson, the Addams Family, Lady Thatcher, Marilyn Manson, a nun et al – to grossly off-putting effect. For ENO (and recently revived) Jonathan Miller has shown in “Rigoletto” how to handle crowd scenes securely. Not in this “Turandot”. Of the eight wise men, who are the keepers of Turandot’s three riddles, three are Elvis impersonators, two golf pros (dressed in pastel-coloured jumpers and trousers), a Hare Krishna … and looked ridiculous. The octet posed lots of questions but answered none. 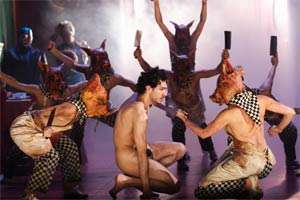 Turandot’s first challenger paraded about naked, and executed by Chinese chefs who wore the heads of pigs. Liù is a rough-looking girl in a dressing gown, forever smoking. No dignity at all, and a contradiction of the character as presented by Puccini. The Emperor is presented as a tramp, pulled from the street, drunk on rice wine. Rupert Goold’s direction is dreadful and he has no idea about how to present an opera and how to use the great characters that this opera provides. It’s a menagerie of disasters.

Having Puccini present isn’t a bad idea, though, the composer an observer of this staging’s action, who writes down what he observes. The Writer is even killed, by Turandot, at the moment that Puccini left the opera unfinished. This again raises more questions than are answered – is Puccini’s “Turandot” like Mozart’s “Requiem”, as Peter Shaffer would have it? It’s a neat idea, though it needs much more exploration. The writing is taken over by a pig-headed man (a reference to the fact that Alfano’s completion is not really that good?), though having the ailing Writer struggle about, with blood everywhere, during the final scene is unnecessary and annoying. 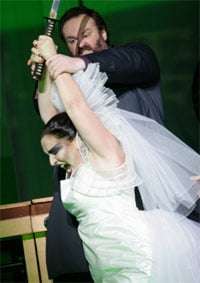 But, perhaps the greatest error made are the clues presented to Calaf when answering the riddles, an astonishing lapse of understanding. As Calaf ponders, silver platters are brought forward and presented to him. Whilst the “Hope” and “Turandot” clues were not explicit, Calaf was presented with blood for the second riddle; he need not have bothered to think at all!

The sets are quite spectacular, imaginative, and the best non-musical thing about the evening. The Chinese Restaurant idea is not as bad as it sounds, and the final Act, set in the restaurant’s kitchen, offers plenty of scope for macabre action. Liù is tortured with all manner of implements whilst she lays on the chopping surface, the bodies of the previous of Turandot’s challengers hanging about (perhaps they are what this Imperial Palace serves up for dinner!). It’s a striking scene.

The singers, generally fine, had to fight against the distractions of the staging. Kirsten Blanck’s Turandot had viciousness to her tone that worked well and Gwyn Hughes Jones’s Calaf possessed an heroic fervour, his ‘Nessun Dorma’ secure and passionate. He is not given much to do about the set except stand and deliver. The pair’s duets were well-matched in voice, and captivating. The stand-out performance came from Amanda Echalaz’s Liù. This was a rock-solid voice that explored fully the gamut of emotions from love to defiance; she will surely make an excellent Tosca for ENO later this season. The trio of Ping, Pang and Pong had fun at the beginning of Act Two. It was announced that Richard Roberts was slightly unwell but that he would sing. However, he was replaced after Act One.

Edward Gardner produced an exciting reading of the score and supported the singers superbly. What a pity that the distractions out-weighed, and even damaged, the often-good musical aspects. Goold needs to go to the chopping board with a meat cleaver and cut this one down to size.