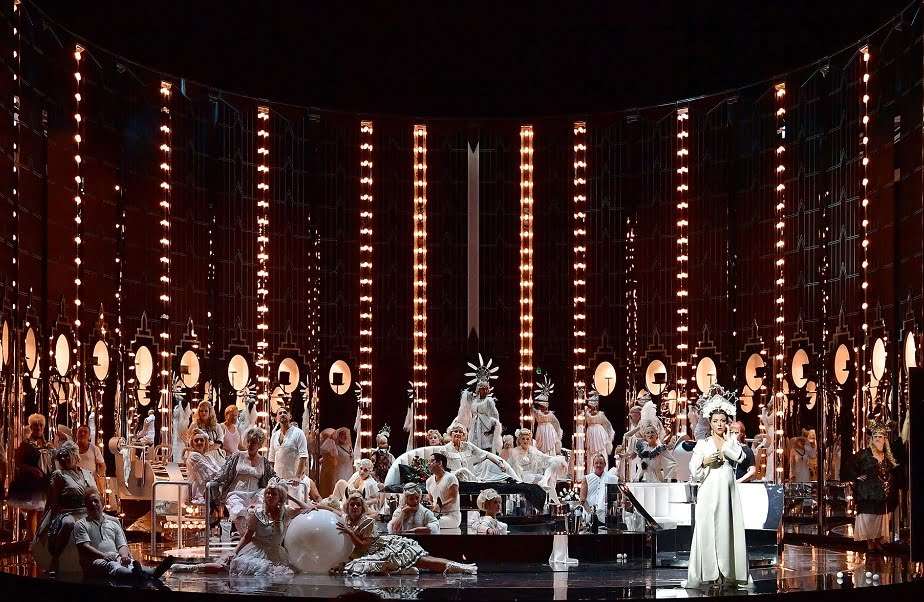 It started so well – an intensely beautiful Act One Prelude (thankfully, in the light of what followed, with no directorial intervention) that covers all the bases of the tragedy of Verdi’s Violetta. And it was all downhill from there. Daniel Kramer’s new (to London; it has been mounted in Basel) staging of La traviata is his first opera in the post as Artistic Director of ENO. His 2016 Tristan and Isolde for the company gave an idea of how much in thrall he is to the big symbolic gesture, which rather put his more detailed, one-on-one direction in the shade, and this Traviata is similarly jinxed.

For the two big party scenes, his designers have come up with a conflation of cinematic Busby Berkeley glamour for the women and a vestigial Victorian propriety for the men (when they are fully dressed). The set is a playpen of earthly delights, with the skimpily attired, shameless thrill-seekers disporting themselves while Violetta and her pals sashay about in slinky satins and extravagant headgear. It’s about as depraved and licentious as the Benny Hill Show, its orgiastic excess indicated by Violetta drinking champagne straight from the bottle to show how hell-bent she is on self-destruction. There are plenty of other, similar gestures in this cliché-driven party-time – not that it matters, because the action is set so far back you only got a general idea of the debauchery.

There might be a point to this if Violetta, who is initially presented as a fetish figure of impossibly erotic mystique, and her innocent and obsessed lover Alfredo create a viable alternative to the heartless Parisian crowd, but Kramer’s direction of Alfredo is simply baffling. While he waits for the elevator to take him away from Violetta’s sumptuous chrome-and-mirrored apartment he jumps up and down like a teenager on a sugar rush, waving and grimacing at the woman he loves, apparently so impetuously. The direction is even more off-beam in Act Three, when the lovers’ reconciliation has them on all-fours doing a bum-wiggling routine on a grubby mattress. You keep asking yourself, why? What is Kramer’s point? And why play around with our expectations of one of the most popular operas without expanding our appreciation of it? Presumably all the money has been used up on the party episodes, because the country retreat is a very plain affair, a suspended bed, some artificial flowers and a carpet of Astroturf. Violetta’s boudoir for her death scene is a grave-yard of mattresses, and the curtain goes up on the terminally consumptive courtesan digging her own grave, yet another Kramer gesture making any point but a clear one. 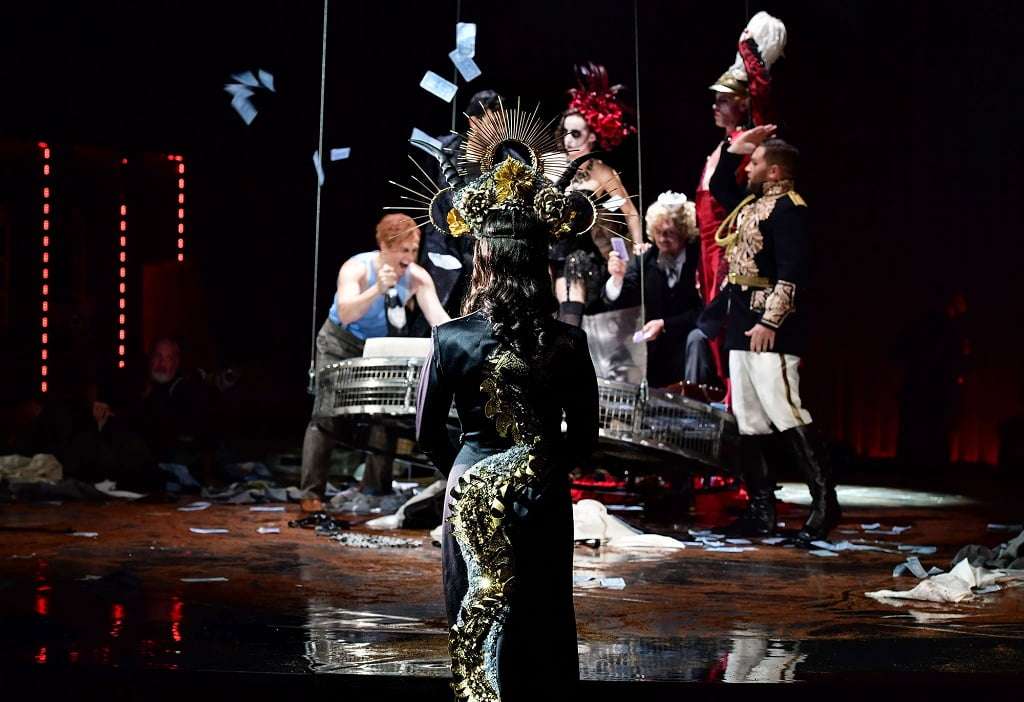 As Violetta Claudia Boyle looks good and wears her gowns well. She suggests mercurial anxiety and she works hard to impose some light on the direction. Her coloratura is airy and accomplished, but in the Coliseum her voice doesn’t have the vital ballast for Violetta’s bigger moments. Lukhanyo Moyake’s voice has charm and elegance, but his singing doesn’t get near to suggesting an Alfredo in the grip of no-holds-barred smouldering passion, and acting-wise he is out of his depth. Alan Opie offers solidity as Giorgio Germont, but the generic direction doesn’t suggest social norms being seriously transgressed – and surely Alfredo would never head-butt his father. The smaller roles of dodgy titled folk are smothered by the staging, although Aled Hall’s Viscount Gaston as a sort of drag-act with daring nipple-tassels makes an impression, as does Božidar Smiljanic’s lovely bass as Marquis d’Obigny; and Martha Jones made her mark as Annina in Act Three.

The main pleasure comes from the ENO Orchestra on distinguished form under Leo McFall (English, works a lot in Germany, conducted an excellent Turn of the Screw for Glyndebourne Touring) whose dramatic flair, flexible support and finely tuned ear are perfectly judged and communicated. ENO’s problems have been much picked over, but I can’t see this Traviata solving them.