Verdi
Otello – Opera in four Acts to a libretto by Arrigo Boito after William Shakespeare’s Othello [sung in an English translation by Tom Phillips, with English surtitles] 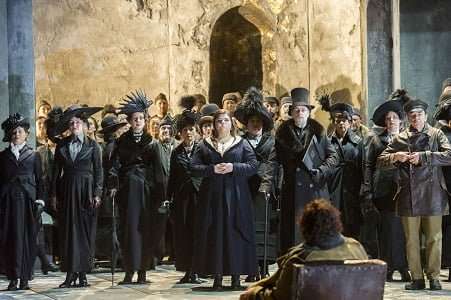 With its finances tighter than ever, English National Opera needs another winner. To open the 2014-15 Season it must have seemed a natural progression from Peter Grimes to this new Otello, both operas with the David Alden/Edward Gardner/Stuart Skelton dream-team, both title roles defining the outsider – they even both go starry-eyed singing about the Pleiades. Alden has been perfectly faithful to Shakespeare as filtered through Verdi and Boito, with the musical side of things so thrilling I wished it was being sung in Italian, but Alden’s staging is so complete a trap that even a singer-actor of Skelton’s stature seemed eclipsed by it.

As with his Grimes, Alden has placed Otello in the 1930s, and his Cyprus is in the overwhelming grip of Italian fascism – it’s not a huge stretch to imagine the setting as The Borough-sur-Med. Despite the racism in the libretto, the nearest this Governor gets to being black is his black hair and black military uniform – as Alden explains in the programme, racism isn’t the point; and he expects the audience to take Iago’s psychopathic loathing of Otello at face value. Another aspect that Alden turns well and rather more subtly is Otello’s deification of Desdemona, to the extent that she is bound to fail as an ideal. As his jealousy deepens, Otello hugs an ikon of the Virgin Mary to himself; and as things unravel even further, the ikon is used as a darts-board. The flyblown grandeur of Jon Morrell’s monumental set expels all natural light, the darkness exaggerated by the huge expressionist shadows and sharp beams of Adam Silverman’s melodramatic lighting, but I think this time Alden has overplayed his overwhelmingly bleak hand. 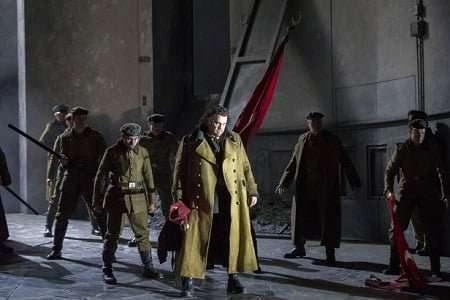 Our first sight of Otello certainly didn’t confirm him as Verdi’s thunder-and-lightning-clad victor, and Skelton’s ‘Essultate’ moment was not the ringing heldentenor endorsement we’d reasonably been expecting to be skewered by. The drama fired up in the second Act, with Skelton’s voice unfolding impressively as his suspicions gather in focus, capped by him at his characteristically pulverising best in the Act Three finale, but Alden’s direction casts him adrift in a sketchily staged Act Four. Skelton fans won’t be disappointed – there’s no doubt of his intense engagement with the role, and his singing does justice to Verdi’s heroic lyricism. Yet there wasn’t much in the way of nobility in the much-loved man betrayed by a loveless, unlovely one, and I doubt whether this will become a signature role for him, as Grimes has.

Jonathan Summers, now, alas, past his vocal prime, radiated a generic blackness of soul more than he supplied Otello with the drip-feed detail of insinuation about Desdemona’s fidelity that Otello craves. Summers’s voice still has its baleful breadth, less of its focus. His ‘Credo’, with some game but ill-advised serpentine wriggling on the floor, was more King Rat than satanic.

In the end, I warmed to Leah Crocetto’s Desdemona. This Cardiff Singer finalist oddly has a voice that sounded most under-pressure and hard in its middle comfort zone, but which soared into a warm lyricism. She delivered Desdemona’s vulnerability, even if, with her Brünnhilde-type heft, there wasn’t much chemistry between her and Otello. Her farewell to Emilia after an effective and distracted ‘Willow Song’ gave a longed-for blast of unaffected tragedy.

Given the straitjacket of the staging, it wasn’t surprising that the smaller roles were further diminished – a pity, because Allan Clayton’s Cassio was distinguished, and Peter Van Hulle’s typically-Aldenesque, effete Roderigo was similarly well sung. As Emilia, Pamela Helen Stephen was more Desdemona’s mousey companion than confidante, so her defiance of Iago had a shocking frisson.

The ENO Chorus was magnificent, blasting the storm scene throughout the theatre, but these singers’ mannered stage movement and antique hand gestures were infuriating, as was the poor demented dancing girl. It is such moments, along with much superfluous chair-hurling flagging up emotional extremes, when you wish that Alden would just get a grip.

If only the staging had matched the music direction. This was Edward Gardner at his best, compelling in the few stand-alone numbers and completely on top of the thrust and momentum of Verdi’s radically through-composed score. Here was the nobility, passion and subtlety of motive that ignites Verdi’s classic tragedy, dignifying Alden’s more fitful direction.