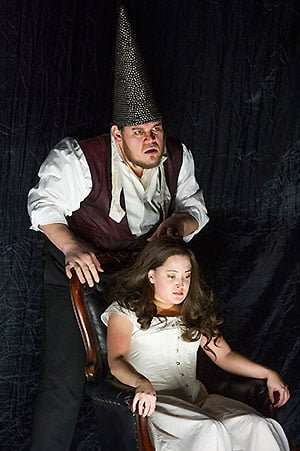 Rigoletto the opera is a hermetically sealed trap of love, betrayal, lust and revenge, a trap set by Verdi’s matchless, psychologically astute music. In his new-to-ENO production – which started out in Chicago in 2000 and was staged in Toronto in 2011 – Christopher Alden has set Verdi’s pitch-black tragedy in the saloon of a grand, Victorian gentleman’s club, oozing with the self-contained privilege that shielded well-to-do men from the real world.

Such an establishment’s closed-to-the-outside environment played a big part in the process of arrested development and sexual repression that started in the nursery and continued through boarding school, university and career. So far, so good, but Alden in an advanced case of ‘directoritis’ can’t stop himself from lavishing layers of interpretation and symbolism that run rings round the story rather than illuminating it. Michael Levine’s imposing and detailed single set contains all the action – everything, the Duke’s court, Rigoletto’s house and Sparafucile’s seedy inn: it all happens within the one design. It heightens the plot’s inescapability, so that the action hovers between reality and theatre of the mind, blurring the edges of this savage, ultra-direct opera into a dream-world.

In this nineteenth-century institution that, oddly, admits women, the parade of haughty, fan-waving wives at the Duke’s party are there only to draw a veil over the depravity of their men, as illustrated by the demented display of Monterone’s raped daughter (here played by a added-on dancer). In a world that thrives on secret societies and arcane rituals, the Duke is ceremonially garbed as a knight in shining armour – and looking very much like the Private Eye logo – to sing ‘La donna è mobile’, which couldn’t make his take on women more obvious; and in a literal closing of ranks, the ‘gentlemen’ form a scrum round the Duke as he has his way with Gilda. 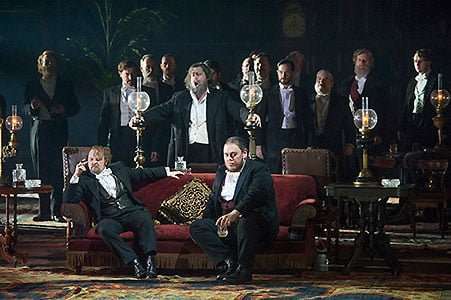 Alden has also succumbed to the modish device of upgrading a small character, Gilda’s maid Giovanna, into an omnipresent and duplicitous agent of doom almost as potent as the assassin Sparafucile, a sinister nanny/maîtresse d’hôtel who runs the place and its members with a rod of iron. And there’s much in the same vein – club-bore Monterone being hanged by the members for transgressing the club’s ‘rules’; frequent recourse to over-stylised movement; and ravished maidens in lip-smacking Victorian underwear. Inevitably, this Alden’s production will be set against Jonathan Miller’s classic 1982 ENO version and will be found wanting.

The burden of directorial aperçus aside, musically this Rigoletto has a lot going for it, with a commanding performance from Quinn Kelsey in the title role. What a pleasure to hear such a fine Verdi baritone in charge of this huge role. He combined the hunchback’s rage with a Charles Laughton-style pathos, especially effective in his Act Two search for Gilda, and rode the part’s high-lying tessitura and the vagaries of the staging with ease. Barry Banks’s portrayal of the Duke as a mad, spoilt man-child was very entertaining, although hardly convincing as the target of devotion, and his light, lyrical singing – as Alden must have intended – was exclusively self-serenading. I have yet to acquire a taste for Anna Christy’s voice. It is light, flexible, virginal and hard, whereas Gilda is warm and spirited. ‘Cara nome’ was impressive, but it is a sadness that the staging fudged Gilda’s crossing Sparafucile’s threshold to her doom so completely. Both Banks and Christy offered solipsistic views of their characters that short-circuited Kelsey’s magnificent giant of a Rigoletto.

Sparafucile, Jack the Ripper crossed with a silent-film villain and summoned up like the Devil by Alden’s hell-fire club, was a great creation from Peter Rose. If I didn’t understand it, I greatly enjoyed Diana Montague’s Mrs Danvers take on Giovanna, and Justina Gryngyte’s Maddalena and George Humphreys’s Marullo were fine contributions. Graeme Jenkins drew a fine Verdian sound from the ENO Orchestra, and I sympathised with him over the tension-breaking long scene-changes.