Wagner
Tristan und Isolde – Opera in three Acts to a libretto by the composer [sung in Andrew Porter‘s English translation, with English surtitles] 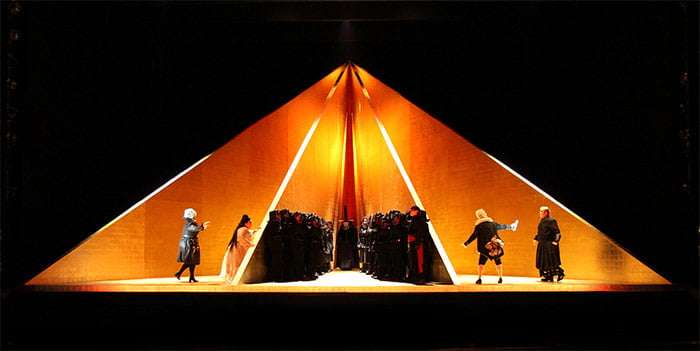 The best I can hope for from productions of Wagner’s dark hymn to love and death is one that will provide those flashes of illumination and recognition along with reaffirmations of existing expectations, while any profound philosophical resonances will be implied rather than overt.

English National Opera’s new production of Tristan hedges its bets in this respect. Inevitably, it has been launched primarily on the back of Anish Kapoor’s set-designs, with the beleaguered company’s saviour-in-waiting Daniel Kramer providing the staging’s nitty-gritty. Kapoor’s sets – three sharp-perspective triangular bays for Act One, a separate one for each for the title roles, the central one for their interaction and the imposing arrival of King Mark and his retinue, the whole suggesting the prow of the ship bearing Isolde, Mark’s reluctant bride, from Ireland to Cornwall; in Act Two a cross-section of a sphere of rocky entrails that rotates to become the dark face of the Moon; and, in Act Three, a down-stage scrim panel with a blood-seeping gash, Tristan’s wound in case you weren’t sure – make his familiar epic-oblique statements.

The sets for the first and third Acts are more-or-less specific, while that for Act Two could be applied to anything, and it requires a great deal of ungainly rock-climbing on the part of the lovers. The sets are both domineering and self-contained, to the extent that you felt any director could impose their own ideas. 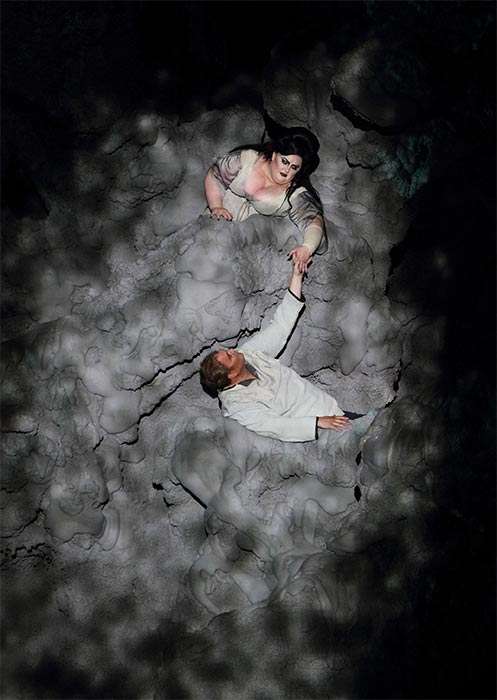 Kramer has an eye trained on the bizarre, decisively confirmed by the parade of Christina Cunningham’s costumes. For some reason, Brangäne and Kurwenal are tricked-out as mincing, mannered and bewigged caricature courtiers, gothic-baroque via the Rocky Horror Show. Tristan, Melot and the chorus of soldiers are dressed vaguely as Samurai warriors; Isolde in a colossally hooped gown. The only, heavily laboured, point of the costumes’ extravagance, for the main roles, was when out of passion or despair, they were partially removed.

Kramer adds plenty of his own apercus. There is much self-harming for Isolde with the sword that presumably Tristan used to kill Isolde’s original betrothed Morold, which escalates into some messy foreplay in the Act Two love-duet/suicide pact, abruptly curtailed by the arrival of the King and a host of medical staff who quickly strap the lovers onto hospital beds.

Costumes and directorial interpretations go their own sweet way but are dwarfed by the Kapoor sets and, of course, the music. Only in Act Three, with the interaction between Kurwenal and the dying Tristan presented as a Theatre of the Absurd dialogue, with Tristan’s drastically bleeding wound enhanced by Frieder Weiss’s excellent video projection, and the wound itself opening onto the rocky caves of Act Two, does the staging achieve anything like the theatrical synthesis Wagner wished for. Importantly, the lovers’ absorption into the realm of night is beautifully staged, even if Tristan’s resurrection during the ‘Liebestod’ is an unforgivable piece of directorial faffing.

Edward Gardner’s conducting picks its way through the directorial minefield with impressive sureness and sympathy. The ENO Orchestra established a spellbinding transparency and spaciousness in the Prelude that remained a constant, and Gardner has a fine appreciation of those great moments when real time imposes on the lovers’ timeless state – the tension that builds towards the Act One arrival at Cornwall, with trumpets fanfaring far away in the heights of the theatre, was beyond thrilling, the accompaniment to Tristan’s final “Isolde” devastating, the opening of Act Three played with a spare layering of sound and unbelievably sad – and there were many other examples of how Gardner hit the spot. But why the massive cut in Act Two? A friend was incandescent with rage. 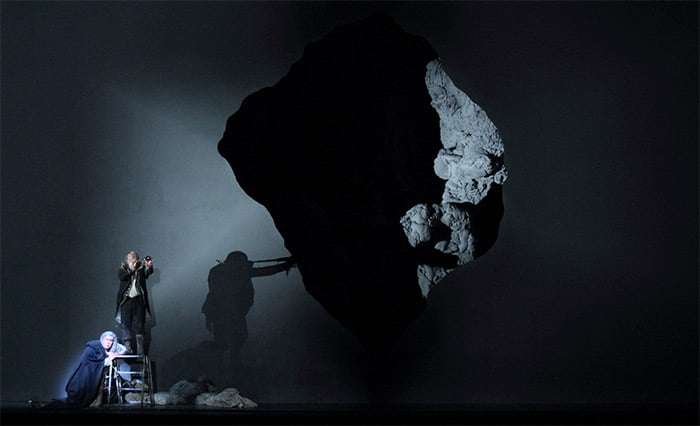 Stuart Skelton’s Tristan is overpoweringly visceral, a huge, generous performance. His tenor, with its strong baritone quality hardly a conventional heldentenor, sustained its power and range. Tristan’s Act Three abandonment of hope and reason was as shocking as I’ve heard, all the more so for Skelton’s skill in anchoring it with moments of lyrical, score-faithful relief. His acting too, though primary, was convincing.

Any worries that Heidi Melton’s Isolde wouldn’t have the necessary attack and personality were quickly dispelled by her rage and acerbic irony in Act One, and by the sheer power of her post-potion bewilderment. Her voice gleamed powerfully, she dealt heroically with the rather clumsy manoeuvres around her rocky love-nest, and she just about had enough stamina if not the transcendent radiance for the ‘Liebestod’, when she was overwhelmed by the orchestra a bit too soon, admittedly not helped by the staging.

Given the Coliseum’s size, Brangäne’s Act Two music was disappointingly without atmosphere, all the more so for the quality of Karen Cargill’s singing, which makes a formidable double-act with Isolde in Act One. Craig Colclough characterised Kurwenal with increasing conviction and had a particular success with the mania of Act Three. Matthew Rose held the tension superbly as Mark in Act Two and sang with terrific authority.

The staging’s moments when the equivocal mystery of Kapoor’s sets and the action coalesced are few, but the music direction carried all before it.