Skip to content
LnRiLWNvbnRhaW5lcltkYXRhLXRvb2xzZXQtYmxvY2tzLWNvbnRhaW5lcj0iNmIzNDMzNmNmZTc3NWZiNGJlMTVjMmIwMzU3NWM1MjYiXSB7IHBhZGRpbmc6IDI1cHg7Ym94LXNoYWRvdzogNXB4IDVweCAxMHB4IDAgcmdiYSggMCwgMCwgMCwgMC41ICk7Ym9yZGVyOiAycHggZG90dGVkIHJnYmEoIDEwOSwgMTA4LCAxMDgsIDEgKTsgfSAudGItZmllbGRbZGF0YS10b29sc2V0LWJsb2Nrcy1maWVsZD0iODM3Y2ExZjc0MGRjZDdkOTdlMzQzOWMyYjIwMWZmZTMiXSB7IGJhY2tncm91bmQtY29sb3I6IHJnYmEoIDIzOCwgMjM4LCAyMzgsIDEgKTtwYWRkaW5nLXRvcDogMTBweDtwYWRkaW5nLWJvdHRvbTogMTBweDtwYWRkaW5nLWxlZnQ6IDEwcHg7IH0g
LnRiLWNvbnRhaW5lcltkYXRhLXRvb2xzZXQtYmxvY2tzLWNvbnRhaW5lcj0iNmIzNDMzNmNmZTc3NWZiNGJlMTVjMmIwMzU3NWM1MjYiXSB7IHBhZGRpbmc6IDI1cHg7Ym94LXNoYWRvdzogNXB4IDVweCAxMHB4IDAgcmdiYSggMCwgMCwgMCwgMC41ICk7Ym9yZGVyOiAycHggZG90dGVkIHJnYmEoIDEwOSwgMTA4LCAxMDgsIDEgKTsgfSAudGItZmllbGRbZGF0YS10b29sc2V0LWJsb2Nrcy1maWVsZD0iODM3Y2ExZjc0MGRjZDdkOTdlMzQzOWMyYjIwMWZmZTMiXSB7IGJhY2tncm91bmQtY29sb3I6IHJnYmEoIDIzOCwgMjM4LCAyMzgsIDEgKTtwYWRkaW5nLXRvcDogMTBweDtwYWRkaW5nLWJvdHRvbTogMTBweDtwYWRkaW5nLWxlZnQ6IDEwcHg7IH0g
Ryan Wigglesworth
The Winter’s Tale – Opera in three Acts to a libretto by the composer after Shakespeare [ENO commission: world premiere; sung in English, with English surtitles]
LnRiLWNvbnRhaW5lcltkYXRhLXRvb2xzZXQtYmxvY2tzLWNvbnRhaW5lcj0iNmIzNDMzNmNmZTc3NWZiNGJlMTVjMmIwMzU3NWM1MjYiXSB7IHBhZGRpbmc6IDI1cHg7Ym94LXNoYWRvdzogNXB4IDVweCAxMHB4IDAgcmdiYSggMCwgMCwgMCwgMC41ICk7Ym9yZGVyOiAycHggZG90dGVkIHJnYmEoIDEwOSwgMTA4LCAxMDgsIDEgKTsgfSAudGItZmllbGRbZGF0YS10b29sc2V0LWJsb2Nrcy1maWVsZD0iODM3Y2ExZjc0MGRjZDdkOTdlMzQzOWMyYjIwMWZmZTMiXSB7IGJhY2tncm91bmQtY29sb3I6IHJnYmEoIDIzOCwgMjM4LCAyMzgsIDEgKTtwYWRkaW5nLXRvcDogMTBweDtwYWRkaW5nLWJvdHRvbTogMTBweDtwYWRkaW5nLWxlZnQ6IDEwcHg7IH0g 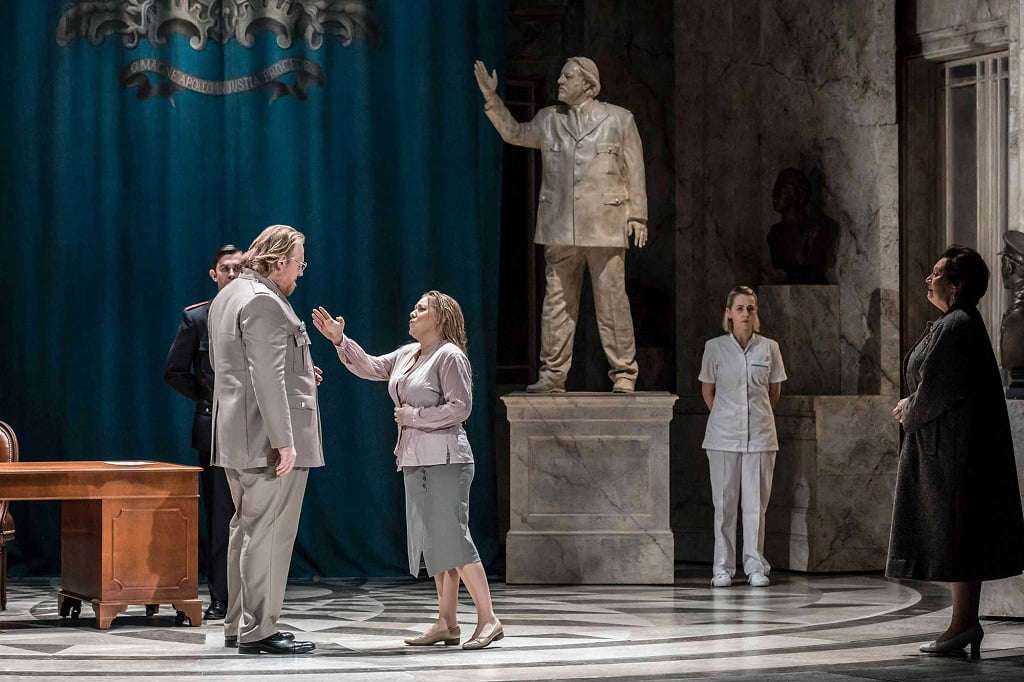 It is reassuring that, despite its current and ongoing financial issues, English National Opera is still able to commission major new works. This latest piece marks the culmination of Ryan Wigglesworth’s spell as ENO’s Composer-in-Residence, during which time he has also been active as a conductor, and The Winter’s Tale duly confirms his status as musical polymath – Wigglesworth adapting his own libretto from Shakespeare and conducting all five performances in this first run. The outcome is an auspicious success for the composer and the company alike.

For all its literary daring and human insight, The Winter’s Tale can seem intractable even in the context of Shakespeare’s later plays. A previous operatic adaptation – Wintermärchen by Philippe Boesmans, staged by La Monnaie in 1999 – failed through attempting to encapsulate too much of this unwieldy drama; Wigglesworth has wisely opted to streamline both text and scenario such that the formal division between those initial three and latter two Acts becomes a natural two-part format (lasting fifty-five and fifty minutes respectively) either side of the interval. With one significant proviso, this clarifies the overall dramatic focus and brings the apparent dichotomy between irrationality and transcendence into more complete accord. Add to this its audible sing-ability, and it becomes clear that Wigglesworth’s libretto leaves little to chance. 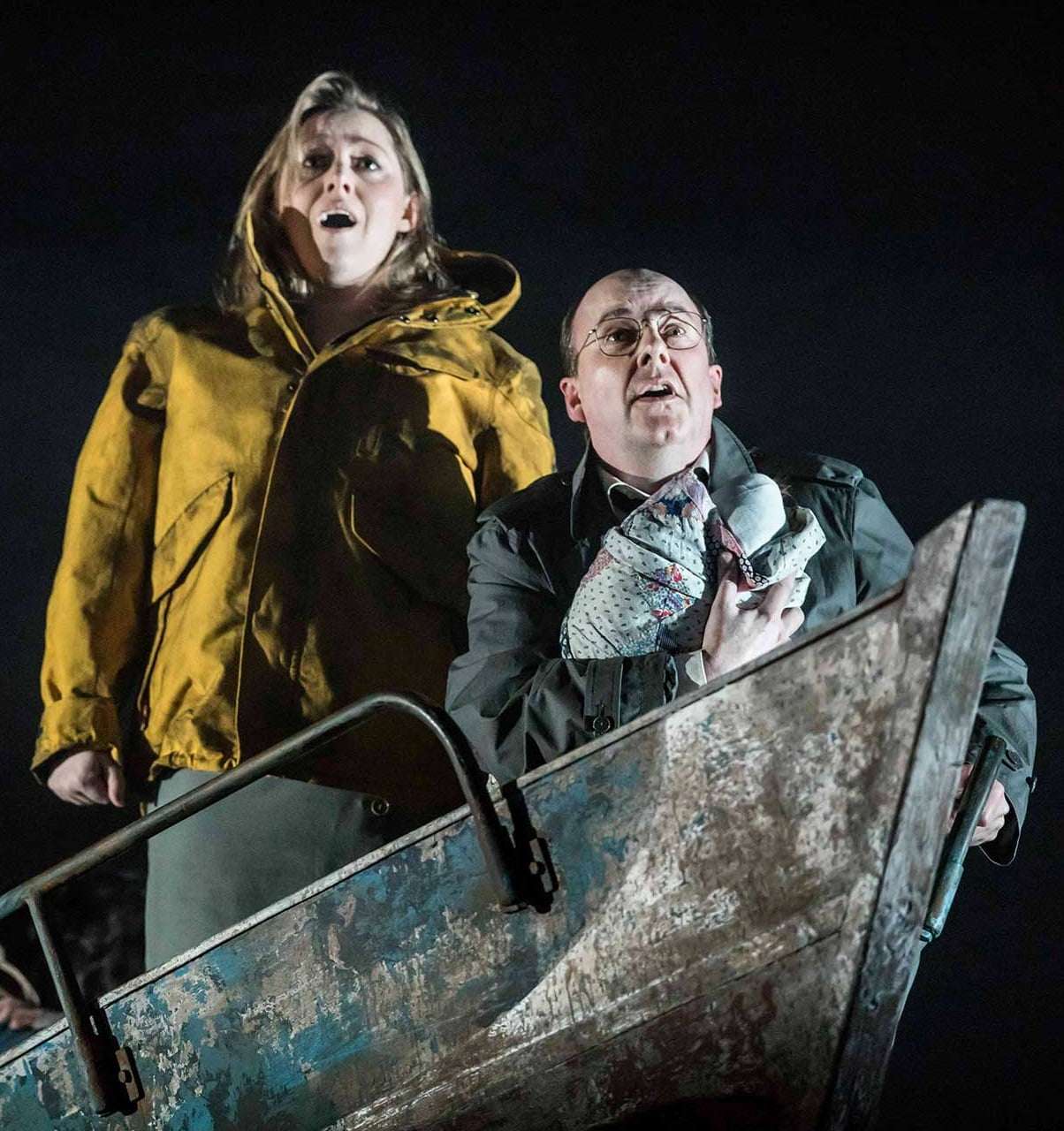 In musical terms, there are the expected stylistic influences – Berg and Britten, with periodic nods to Tippett and Birtwistle – and if Wigglesworth has not fashioned a startlingly original amalgam from these, it is a thoughtful, cohesive and, for the most part, personal one. Notably effective are the orchestral interludes which segue between the scenes of Act One, ensuring formal continuity while accruing expressive tension across the whole towards a climax more searing for its outward understatement. The latter two Acts chart the changes in emotional emphasis without risk to musical consistency, though it is a pity about the several minutes’ break between them – not least as Wigglesworth had laid the musical basis for a seamless transition such as the staging could surely have underpinned in scenic terms.

Not that Rory Kinnear’s direction, his debut in this capacity, is less than successful in almost all other respects – its emphasis on circular motion an apt metaphor for those machinations of fate that channel to ends as unpredictable and unforeseen as even Shakespeare envisaged. Kinnear is abetted in this by Vicki Mortimer’s sets, enclosing the action in a circular framework that intensifies the claustrophobia of the first Act and then teases out the often more nuanced interaction in what follows. Moritz Junge’s costumes do the job of setting the action within a military dictatorship of the post-war era in suitably graphic terms, enhanced by Jon Clark’s vivid while never garish lighting and Imogen Knight’s free-flowing but not over-energetic choreography. Overall, the economy and precision of the staging serves the drama admirably. 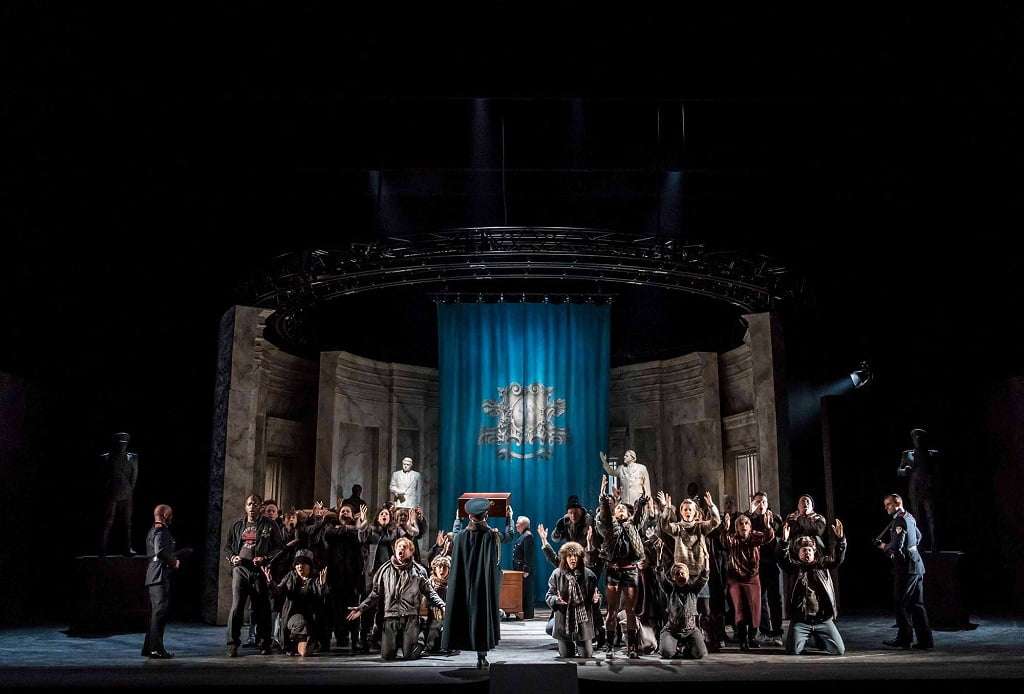 The cast could hardly be bettered. Iain Paterson makes of Leontes a more empathetic figure than ought to be the case, building his character gradually and inevitability during the first Act before making a fractured reappearance at the start of the third. As Hermione, Sophie Bevan exudes radiance and uncomprehending trust whose destruction finds the most unlikely of resolutions at the denouement. An ideal assumption, as are those of Leigh Melrose as the only marginally less divisive Polixenes and Susan Bickley as the moral force that is Paulina. Neal Davies summons the necessary integrity as Antigonus and brings warm-hearted naivety to the awkwardly humorous role of the Shepherd, while Timothy Robinson characterises the pivotal role of Camillo with acuity and Anthony Gregory is blithely uninhibited as Florizel. Zach Roberts makes an arresting impact in the silent role of Mamillius, here made a cipher for those destructive machinations that are resolved through circumstances not so much illogical as supra-human in their evoking of forces such as defy easy understanding.

Having participated in performing most of his own works, Wigglesworth was a shoe-in for conducting this opera – his clear and attentive leadership always at the service of the drama, while ensuring clarity throughout an orchestration whose lack of artifice does not preclude any number of felicities from emerging. That the Orchestra and the singers joined in the applause at the close was confirmation of his success in the creative and executive roles.

The Winter’s Tale may not be a revelatory or ground-breaking opera, but it is a resourceful and absorbing one. Hopefully this first run will meet with the success it deserves, and ENO will grant it the revival warranted by but rarely accorded to its commissions of recent years.