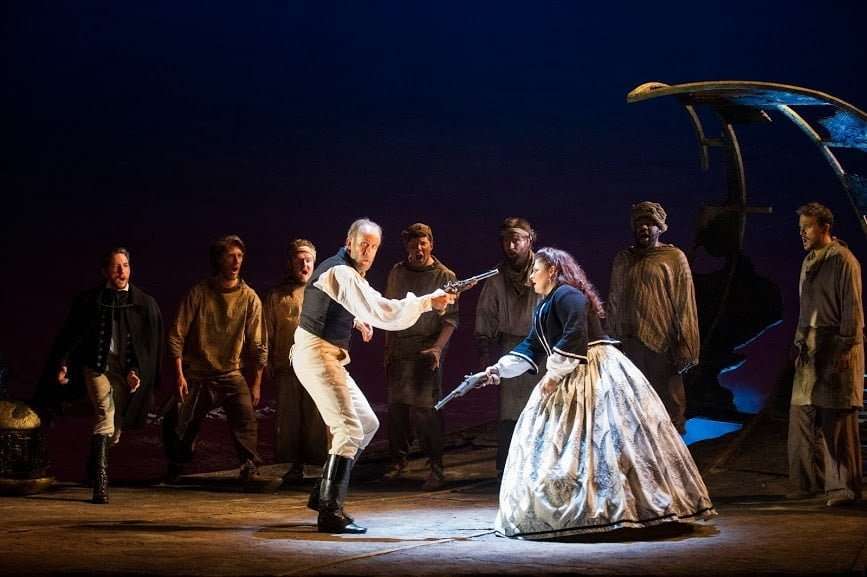 Donizetti’s Il furioso all’isola di San Domingo was a great success during the composer’s lifetime, largely down to its fantasy in a far-away place about a Spanish nobleman (Cardenio) who flees his home to go nobly savage and mad in the West Indies after he discovers his wife Eleonora in flagrante with his brother Don Fernando. There have been some specialist/festival resurrections in Europe and the USA, but this ETO staging is the first modern one to present it in repertoire (between now and the end of May).

You can see why ETO’s indefatigable James Conway was drawn to the piece – the mix of slavery, racial and colonial oppression, redemption, illicit passion, sudden blindness, suicide pacts and a bit of light humour, is ripe with Shakespearian potential (Shakespeare’s lost play Cardennio was also based on the same Cervantes story), and while the music is not on the same consistent level as, say, L’elisir d’amore (composed just before Il furioso) or Lucia di Lammermoor, there is enough to show off the talents of the cast of six.

The problem, though, is that in the first Act, the two leads, Cardenio and his errant wife spend a lot of time going over the misery of their situation. The director Iqbal Khan covers up the lack of action well, but even the tempest (which washes up Eleonora and Don Fernando on the island), the buffo humour and sentimentality from whip-cracking Bartolomeo (on whose plantation Cardenio is hiding), his daughter Marcella and his slave Kaidama (who secretly look after Cardenio), and a bizarre picnic when mad Cardenio starts getting fresh with Kaidama, mistaking him for his wife, cannot disguise the paucity of plot. It’s very strange – one moment you’re in a perfect storm of lofty, aristocratic passion, the next in a Gilbert & Sullivan-flavoured Black and White Minstrel Show, all contained within Florence de Maré’s pleasing, abstractly maritime fixed set. 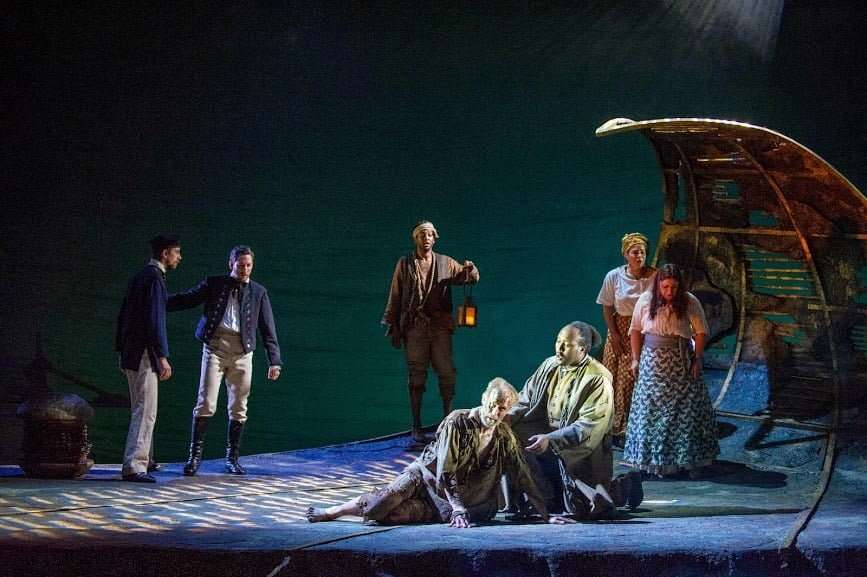 The cast gave it everything. In the title role, Craig Smith loomed tragically like a particularly distraught Ancient Mariner, and his focused, light baritone was full of noble intensity. Sally Silver had a natural rapport with the bel canto style and is an accomplished tragedienne, both aspects quickly established in her first aria (which keeps dipping into ‘Furtiva lagrima’ territory), and she and Smith were terrific in their duet at the start of Act Two. Peter Brathwaite was very impressive as the slave Kaidoma, with mercurial and sympathetic comic acting matched by agile, accomplished singing. He made what could have been a caricature role into something sharply observed.

Nicholas Sharratt put his lyrical, cultivated tenor to excellent use in Fernando’s music – he has a show-stopping aria in Act Two – and his courtly bearing neatly exposed what Cardenio had become. Donna Bateman was a Susanna-like foil to Eleonora, and her lively soprano contrasted well with Silver’s fuller tone. Njabulo Madlala cracked his whip enthusiastically and was touching in the Act One finale as he draws out from Cardenio the cause of his descent into madness. Khan made effective use of the Chorus, which added considerably to the powerful Rossini-like crescendos.

The surtitles were a bit too larky at times, drawing attention to the humour not being completely integrated into the rest of the drama. As he did in The Siege of Calais, Jeremy Silver conducted with flair and an obvious feel for the idiom.