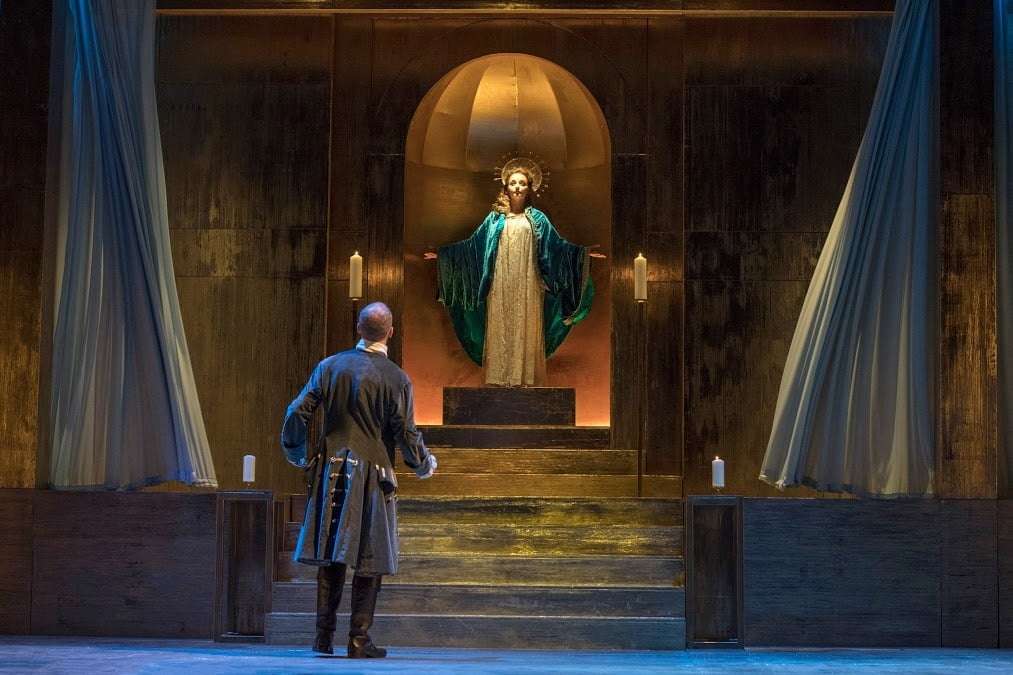 Wishing to preserve the grand scale of Handel’s operatic masterpiece and not cut any of the music, English Touring Opera’s new production of Giulio Cesare (1724) divides it into two parts, which will be given on tour variously on consecutive evenings or on the same day. Dubbed “The Death of Pompey” and “Cleopatra’s Needle” respectively, these instalments refer (by way of an oblique joke to a London landmark in the latter case) to the two events around which Julius Caesar’s foray into Egypt turn in this drama – the murder of his rival by Tolomeo, the ruler of Egypt, and the triumph over Caesar in turn by Cleopatra, through amorous rather than political means.

It is curious that, in seeking to be faithful to the integrity of the complete score, the surtitles for this production mostly précis the text of the arias and so deny the audience the opportunity to follow the libretto in full translation (the repeated structure of the da capo arias hardly comprise a great deal of text in any case). Insofar as there is any justification for this, it seems to be of a piece with the concept of James Conway’s production which essentially presents the work in its musical completeness as an artefact of Handel’s age, with the characters in eighteenth-century costume – as would have been done at the time – and not re-creating the ancient world. 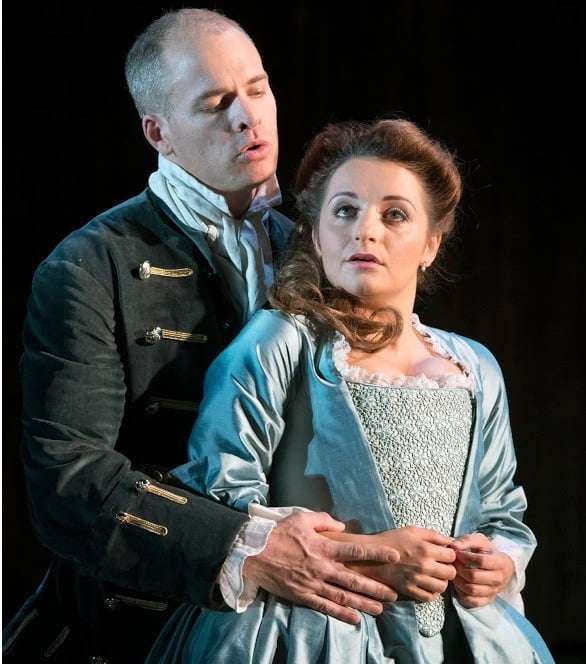 The résumés of the arias, then, aided this sense of dramatic distance between stage action and spectators by introducing them usually in similar patterns ‘In which X says/does…’, recalling the manner in which the synopsis of Italian operas were set out in the word-books for Handel’s audiences, and Caesar is always referred to as “the Hero”. A further distancing device is used by having the chorus (never an integral part of Handelian opera seria) make brief contributions in the first part from the Circle on either side of the stage, clad in contemporary casual dress as though speaking from our perspective, and creating a dramaturgical frame from which to apprehend the opera.

This approach will intrigue some and frustrate others; it is perhaps grist to the mill of an argument the latter would make that this is not a faithful re-enactment of Handelian opera in 1720s London, and the set (which is also used for Dardanus in ETO’s current season) is a modern, but effectively timeless backdrop of clouded bronze walls, in which the doorways and screens open up at various times to facilitate the movement of the singers, and to close up or dilate the space of the drama. One ironic concession to elaborate Baroque aesthetic is Cleopatra’s revealing of herself when attempting to seduce Caesar with her garden of delights in ‘V’adoro, pupille’, in the guise of the Virgin Mary, mimicking those kitsch statues of her on Catholic altarpieces standing in a trance in contemplation of divine mysteries.

Less stimulating or positive is the reprise of some scenes from Act Two at the opening of the second instalment, as though in a flashback to remind us of what happened at the end of ‘The Death of Pompey’. Clearly that is useful where the parts are spread over two evenings, but when given on the same day it makes for a needless repetition and a long evening, testing attention and patience. Admittedly subtle changes are made, but really it would be more interesting to take a radically different perspective upon those repeated scenes (numbers 3 to 8 of the original’s Act Two). By the time Act Three is reached, and the fourth hour of music, the dramatic tension flags and more visual or scenic variety is required.

Fortunately that cannot be said of the performance by this cast – uniformly excellent in terms of abilities, offering a compelling range of characterisations. Christopher Ainslie is an assured and stately Cesare, whose coloratura retains steady focus and clarity, entirely in keeping with the confidence expressed in his ‘Veni, vidi, vici’ quip which is taken over into Haym’s libretto (but without the warrant of historical accuracy). Soraya Mafi’s Cleopatra is one of dainty, coquettish charm, rather than flashy, blazing virtuosity, and there is almost a fragile delicacy in the roulades of her and Ainslie’s ornamentations for their concluding duet, which is moving to hear. 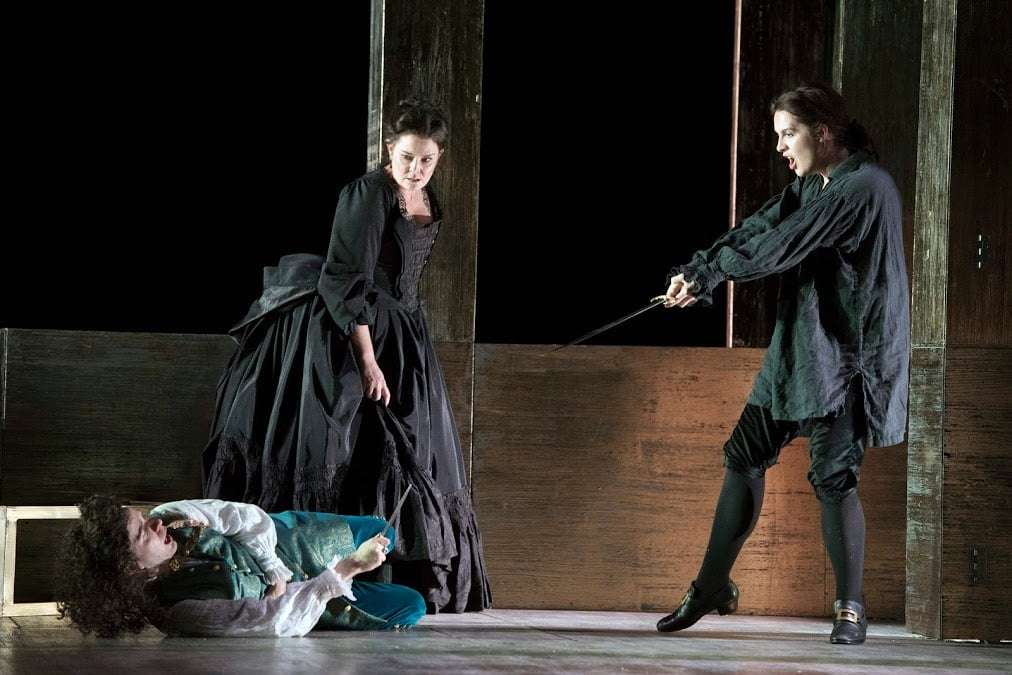 Catherine Carby and Kitty Whately make an equally well-defined pair as Pompey’s widow Cornelia, and their son Sesto respectively. Carby bears the anguish of Cornelia with expressive nobility, whilst Whately manifests Sesto’s sensitivity and innocence through singing of conviction and urgency. Benjamin Williamson skilfully evokes the vile and oleaginous character of Tolomeo who ineptly taunts Cornelia and Sesto, and seeks to curry favour with Caesar, by contriving a sort of fulsome tone that captures his personality precisely. His turquoise overcoat also gorgeously conveys his louche but ultimately effete nature. Frederick Long, Benjamin Bevan, and Thomas Scott-Cowell round out the cast with solid appearances.

Jonathan Peter Kenny sustains an appropriate pace with The Old Street Band, each successive number running along with palpable energy and spirit. On the whole there is suitable contrast between arias in which Handel acutely depicts the psychology of his characters, though occasionally a less-driven manner would create greater variety: Cornelia’s lament for Pompey’s death near the beginning of Act One might be more sorrowful, and Cesare’s ‘Vatacito’ more furtive. The breadth of music here makes the two parts a long haul, but the exceptional cast, as unfaltering as Handel’s inspiration, make it worth persevering.