Puccini
Tosca – melodramma in three Acts to a libretto by Giuseppe Giacosa & Luigi Illica, based on the play La Tosca by Victorien Sardou [sung in Italian, with English surtitles] 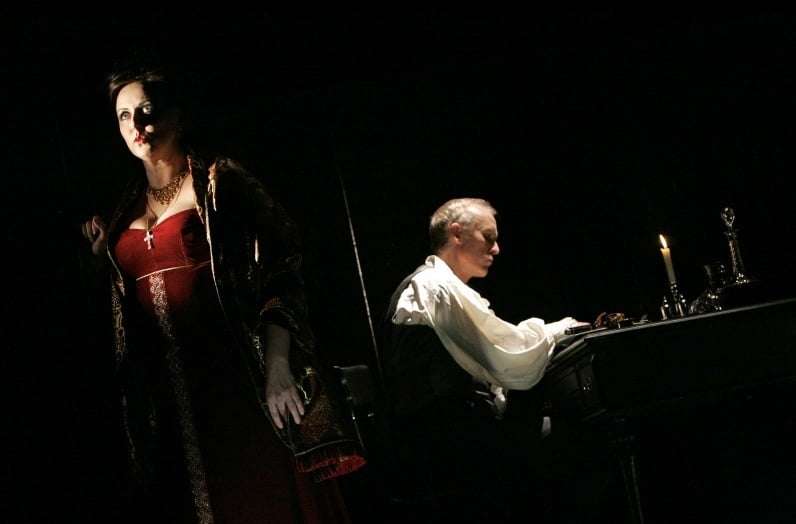 You would have thought Tosca would be right up English Touring Opera’s street, ticking all sorts of boxes – box-office appeal, big opportunities for three lead singers to make their marks, a handful of useful secondary roles, a production and design challenge for the exigencies of travelling, and locally sourced choral contributions that are required only for the first Act. James Conway’s company, which has got all of the above right over the years, has, however, stumbled with this new Tosca.

The main problem is the set, a minimalist abstract of ramps and steps, jollied up by what looks like a job-lot of hardboard, machine-pierced with a vaguely Middle Eastern pattern, with a statue of the Virgin Mary to denote Rome’s Church of St Andrea dell’Valle, a couple of tables for Scarpia’s rooms in the Farnese Palace, and a vertical ladder for Act Three’s Castel Sant’ Angelo. The costumes place the action in the story’s Napoleonic period, but the inclusion of women clergy in the ‘Te Deum’ is a Catholic step too far, then and now – but I have yet to see it done in a liturgically informed way. The caution the singers took not to trip over or squash protruding bits of the set was noticeable, and the perma-black backcloth ignores the day-evening-dawn progress of the story. 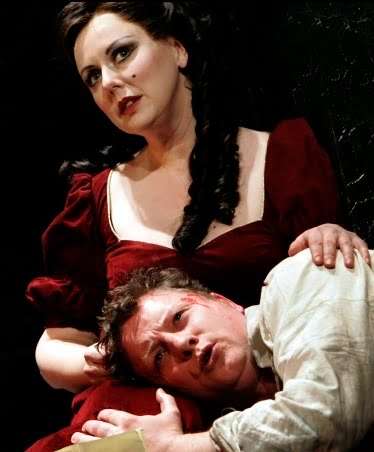 In this second performance of ETO’s spring tour (which ends in Blackpool on June 10), Tosca was sung by Laura Mitchell. Her bright, weightless soprano is lyrical and graceful but lacks the oomph to convey the ego-centrifuge of Rome’s leading lady. Mitchell warmed up in Act Two to give Scarpia a convincing run for his money and an idea of Tosca’s imperious eroticism, thickening her voice to flesh out a finely judged ‘Vissi d’arte’, and her pre-leap ‘O Scarpia, o Dio’ lived up to its melodrama. Tosca would, though, have had to stab very hard to dispatch Scarpia with the ineffectual fruit-knife that came to hand.

Alexander James Edwards delivered a too-nice, puppyish Cavardossi, and he bravely pushed his handsome, if rather monochrome tenor into heroic territory not reliably in his reach – he will need to husband his resources over the months in this killer role. ‘Recondita armonia’, though, set up the ardour well, and his affecting ‘E lucevan le stelle’ transcended the vagaries of the set.

Craig Smith needs much more vocal blackness to express the monster that is Scarpia. His predatory acting, with much cloak-twirling, went some of the distance in exposing Scarpia’s sado-masochistic talents, so that it wasn’t too much of a stretch to imagine him as the man before whom all Rome trembled.

The smaller roles all hit their stride – a superbly malevolent, full-voiced Spoletta from Aled Hall, a characterful Sacristan from Jan Capinsky, a Sciarrone from Maciek O’Shea of matchless, blank viciousness and a suitably desperate Angelotti from Timothy Connor.

Michael Rosewell covered any lack of vocal substance with the pace and energy of his conducting, and the reduced but full-sounding orchestra exposed a lot of Puccini’s Italian-style leitmotifs – I particularly liked the orchestral halo introducing his heroine timed to fit in with the cover being removed from Cavaradossi’s painting. ETO has fielded many memorable productions, but this Tosca isn’t in that illustrious league.