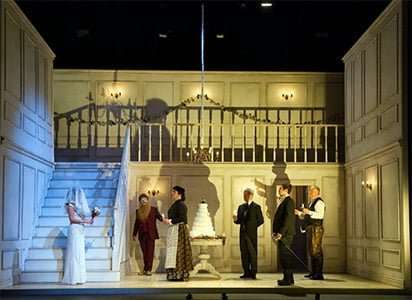 English Touring Opera present three productions on its current run connected by the theme of Venice. Interestingly none of the composers were native Venetians, but they found success there in one or other of the many opera houses which functioned in the Serene Republic during the course of the 17th- and 18th-centuries. Even if Venice did not give birth to the phenomenon of opera, the city certainly nurtured its development in the first century or so of its existence to a considerable degree.

Among many operas premiered in Venice was Cavalli’s Giasone, in January 1649. It is strange to think that, just as England was about to behead its king and enter a period of moral and cultural reaction, Venice saw the heyday of opera’s first phase in works such as this, often performed in conjunction with the festivities of the Carnival. Giasone is loosely based on the myth of Jason’s expedition to take the Golden Fleece, though the essentially comic conception of Cavalli and his librettist largely focuses on Jason’s feckless infatuation and marriage with Medea, callously leaving behind Isiphile, the mother of his children, in Lemnos. Charpentier’s and Cherubini’s operas on the subject of Medea treat a later episode in the entanglement between her and Jason, and it may be said that Don Chaffey’s film, Jason and the Argonauts, dramatises a rather different, heroic figure from Cavalli’s.

In this opera’s exploration of the conflict between love and duty, it falls to Hercules to urge Jason on to perform his more ‘manly’ task of leading the Argonauts, rather than allowing himself to become ensnared by amorous amusements – curious, given that in many other myths, Hercules is no stranger to sexual pleasure. Faithfulness to received stories did not trouble the writers of opera at this time, however, and Giasone crystallised such conventions as a happy ending (Jason is reunited with Isiphile here), a comic servant, a figure in drag (in this case the nurse Delfa), the distinction between recitative and aria, and the association of certain character types with the musical voice assigned to them (sopranos for the lead women, castrato for the man, and so on).

In this version by Ronald Eyre some of the almost-picaresque sequence of events are subject to cuts, reducing the opera’s original three Acts to two (and as many hours). Ted Huffman’s new production certainly keeps the comic dimensions, particularly in the parts of Orestes and Demus, but it does take fairly seriously the characters’ emotions and dilemmas – usually brought on by their own weakness rather than premeditated evil. It is not staged in any specified time or place, though the set for Jason’s and Medea’s marriage in the staircase hall of a stately home (wooden panels, chandelier, decorative swags and mouldings), the characters’ dress and the abiding presence of Delfa as a formidable housekeeper, strongly implied the 1920s or thereabouts – perhaps the example of Downton Abbey proved too tempting to resist.

The same set was used for the second half, but transformed into a dilapidated and forlorn state as the habitation of the abandoned Isiphile, with the decoration removed and tree branches growing through the broken side panels. The direct contrast effected with the more comfortable scenes previously, in which Jason had cavorted with Medea, was poignant. The branches neatly came to suggest the wood later on in Act Two under which Isiphile comes upon the sleeping Jason and Medea. 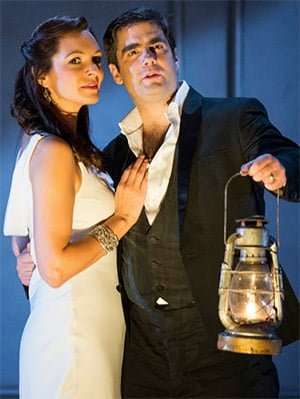 Before any of this was seen though, Peter Aisher (in place of an indisposed Stuart Haycock) appeared in the ‘Prologue’ as Apollo, oddly apparelled, with a long, ginger beard, as a wizened old man, and supported with a walking stick – hardly what one expects of the incarnation of eternal youth. As an understudy student at the RCM, it must have been nerve-wracking to open the first night of a production by otherwise professional singers, but his singing was rather marked by bellowing and declamation. Initially this quality seemed to transfer to the other singers in the opening marriage scene, with unnecessarily wide vibrato, but they relaxed into their parts soon enough. To be fair to Aisher, he reappeared as the stuttering hunchback Demus, and projected musical charm and wit in this role.

Clint van der Linde’s Jason was musically agile and lyrical, suggesting something of the character’s inability to determine his romantic preference one way or another. As Medea, Hannah Pedley rightly showed rather more purpose, particularly against the attempts of her former husband, Egeus, to win her back (even though this does eventually happen, after the convolutions of the plot). At first, Catrine Kirkman demonstrated Isiphile as an appropriately weaker character, even frumpish, but she brought a more assertive side to the role as she berates Jason, and in a long lament seeks suicide, which incites Jason to ask for forgiveness. As Egeus, John-Colyn Gyeantey tended to whine, rather than simply implore Medea to return to him, but there was tenderness in his voice at the happy dénouement.

Both Andrew Slater and Piotr Lempa had powerful bass voices, though to very differing ends, as Hercules and Orestes respectively: authoritative and stern in the former case, jocund in the latter, where Lempa exploited the very lowest notes of his register to comic effect, though his singing was marred by some strangely elongated vowel sounds. Surprisingly little comedy or camp behaviour was imparted to the role of Delfa by Michal Czerniawski, and given that, it is to his credit that musically his alto voice could be believed to be that of a mature woman; his rendition of Delfa’s lament over her vanished beauty (another convention for this type of character) was moving too.

With comparative economy of means, English Touring Opera has very decently and coherently realised a landmark Baroque opera, preserving also the spectacle of some magic, as when Medea performs a ceremony involving fire, and liquid nourishment conjured from nowhere in a pair of bowls to strengthen Jason before departing on his mission to the Fleece. The Old Street Band provided dependable accompaniment and a sensitive realisation of the continuo part.