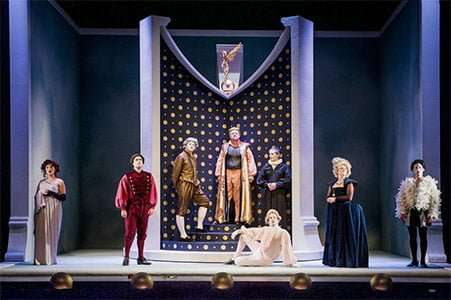 Even by Baroque-opera standards, Handel’s Agrippina is fiendishly complicated, but one aspect of it couldn’t be clearer in James Conway’s brisk new production for English Touring Opera – that Agrippina is the pushy mother from hell. Running in tandem (along with Cavalli’s Giasone) with Conway’s 2012 Stalinist take on The Coronation of Poppea, Handel’s opera is a loose prequel to Monteverdi’s in terms of story (and shares some of the same characters), charting the Empress of Rome’s machinations to secure the throne for her son Nerone (Nero), a greasy-pole dance neatly summarised by Mary Beard in her programme article. Between the end of the Handel and the beginning of the Monteverdi, though, Agrippina gets done-in by the toxic son she so tirelessly promoted. Pushy mums beware.

The opera derives even more friction from Agrippina meeting her match in Poppea, all underpinned by a flow of fabulous, tuneful arias, which in turn are undermined by Conway’s infectiously comic, camp staging. It lasts about three hours (45 minutes shorter than ENO’s 2007 production), and its extra-fast spin-cycle of plot, counterplot and tireless scheming didn’t slacken for a moment. Handel’s first major operatic success (written when he was 24), Agrippina originally had about 40 arias. I lost count of how many Conway used, but it must have been in the twenties, most of them complementing the production’s irrepressible energy.

Samal Blak has done a very elegant job with the set, an architectural folly crowned by the figure of Cupid with his bow and arrows that rotates to reveal three bays, the most significant being Agrippina’s lair, a space with a blackboard on which she tries to work out the impossible equations of the plot. It suited the scale of the Britten Theatre very well and enhanced the rapid turn-over of entries and exits. Black’s costumes were neat, too – Agrippina’s gown parting to reveal gold leggings (lest we were in any doubt as to who is wearing the trousers); Nerone’s saucy leather doublet and feathery bolero jacket indicating seamy sexual possibilities; preposterous, Simpsons-style wigs for mother and son; skimpy sex-kitten attire for Poppea. The look of it was knowing and great fun. 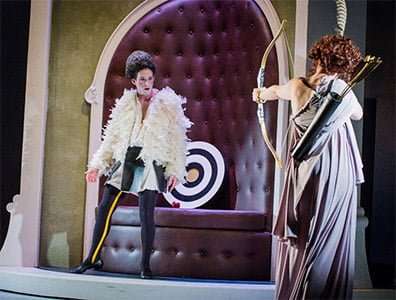 Gillian Webster’s Agrippina took a firm grip on proceedings. Vocally imperious and technically commanding, she cut a marvellous figure as a back-stabbing, ambition-crazed gorgon just about keeping one step ahead of the mayhem she has unleashed. The only other female role, Poppea, was sung in just as fine flair by Paula Sides, her voice lighter and brighter than Webster’s powerful instrument, Poppea’s crown-grabbing will and political cunning every bit as steely and fleet-footed as Agrippina’s.

The men in their lives were just as strongly characterised, and boasted a trio of accomplished countertenors. Jake Arditti was an agreeably spoilt and debauched Nerone (extending to a passing incestuous interest in his mother), and for someone so slight Arditti has a big, flexible voice that raised the roof in his final, climactic aria. Ottone, the only good character (who declines the crown in favour of Poppea) was sung with sonorous warmth by Clint van der Linde, who gave his arias – the nearest the opera gets to a heart – a suitably languorous and plangent portrayal. Russell Harcourt was nimble-voiced and wickedly self-serving as Narciso and paired up well with baritone Nicholas Merryweather’s solidly sung Palante, both of them Agrippina’s much-abused suitors. As Claudio, the emperor-husband Agrippina is so eager to be rid of, Andrew Slater deployed his robust baritone and some trenchantly observed comic-coarse acting. And in an opera so deliciously stuffed with monsters, we had the extraordinary, gold-faced, semi-supernatural Lesbo (Claudio’s servant), finely sung by Luke D. Williams, who is also blessed with contortionist skills.

Jonathan Peter Kenny kept the score powering along, sometimes a bit too much for the singers’ comfort, and the Old Street Band produced a raw, bracing, period sound that fitted the action perfectly. The Overture was a particular pleasure. There weren’t subtitles for Conway’s translation of the libretto – the bits I caught sounded completely in synch with the staging – but on screens either side of the stage there appeared thumb-nail plot-aids and indications of what we were to infer emotionally from the music at particular points, in much the same way as in silent movies. It’s very arch and it worked really well. Agrippina is touring until November 23. Do yourself a favour.