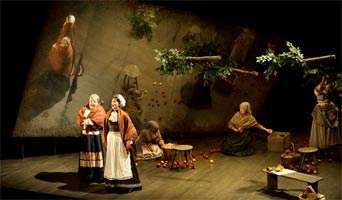 Magicians do it with mirrors, so Joanna Parker has conjured up a king-sized looking-glass to do service at the centre of this enchantingly-designed production of Eugene Onegin. It is a looming structure that reveals, reflects and realigns all manner of visual ideas within James Conway’s elegant staging. Cunningly lit by Guy Hoare, it adds grandeur to the Larins’ garden and doubles the scale of the ball in Act Three. Parker’s creation is the sleight of hand that allows a small staging to become a big one.

Conway’s production (first seen in 2007) may be diminutive in square footage, but not in its ambition or accomplishment. While one may regret a few truncations to Tchaikovsky’s score (the peasants are largely absent from the opening scene), the musical standards are extraordinarily high. Michael Rosewell is at home in this repertoire and the ETO Orchestra clearly relishes the idiom. A modest contingent of strings works overtime and only sounds undernourished at significant moments. 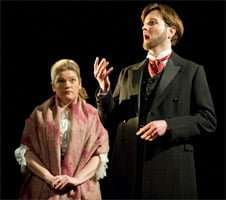 The epic role is not the eponymous hero but Tatyana, the lady of letters who must span the ages from hormonal teenager to demure princess, and do so as a dramatic soprano with high- and low-lying registers of equal security. In Sarah-Jane Davies, ETO has found a singer of exceptional power, precision and warmth, blest with a voice that is rich but never curdles. It is just a pity her acting is so rudimentary, because unless that improves she may find doors closed that should be flung wide to welcome her immense talent. The ‘Letter Scene’, for example, is desperately static. No tingle of passion coarses through this young woman’s frame as she pours out her emotions. “You’re quite your cheerful self again”, declares Frances McCafferty’s Nursemaid to an expressionless statue. 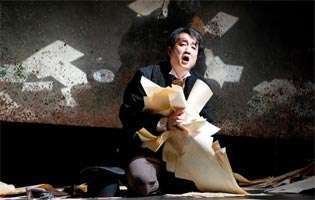 Among the minor characters, Andrew Glover contributes a terrific cameo as Monsieur Triquet, Tatyana’s tutor. This young tenor has it all: accomplished stage skills, an expressive face and a pleasing, nimble singing voice. By contrast, while Glover is notably younger than most singers cast in this role, Stephen Holloway looks and sounds too mature to be Tatyana’s husband, Prince Gremin. This may be a deliberate casting decision by Conway to highlight Tatyana’s development from a naïve young girl who leans on a romantic novel as she writes her letter to the aristocratic wife who confronts (and resists) Onegin many years later; however, that doesn’t prevent the Gremins from coming across as ill-matched.

Nicholas Lester is a satisfyingly supercilious Onegin. Any performer in this role needs to be charismatic if he is not to be outshone by Lensky during the first hour, and he is. Lester’s timbre may lack an authentic Russian edge, but he is a top-class baritone and he brings a dynamic authority to his character, notwithstanding some unduly static direction by Conway who asks him to express anger by throwing chairs around. Niamh Kelly is dramatically convincing and vocally charming as Olga, Tatyana’s sister, while as her lover, Lensky, the Banquo to Onegin’s Macbeth, Jaewoo Kim lends his ringing tenor to some of the score’s most lyrical pages and in so doing conveys the warm, sympathetic heart of a good man.

This passionate tale, composed by Tchaikovsky with surprising economy, is as melodic as it is dramatic. The fallible behaviour of the protagonists has a timeless resonance and the musical set-pieces never fail to rouse the spirits. ETO’s tour of Eugene Onegin has plenty more scheduled stops on its travels around England: it cries out to be seen.