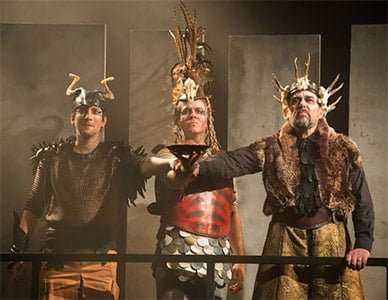 Michael Tippett’s second opera, King Priam, was part of the best-of-British arts events marking the dedication of the new Coventry Cathedral in 1962, sharing the musical honours with Britten’s War Requiem. Both works are rooted in their composers’ pacifism, and the Britten work quickly became an international bestseller. King Priam has been staged by the major English companies (the most recent was from ENO in 1995, revived in 1999), but has fared less well in Europe and the US. This is its first new production for nearly twenty years.

It’s easy to understand why it will never be core repertory. In all his five operas, Tippett tub-thumps his psychological, symbolic, social and politics agendas, while nuances of character tend to go on the back-burner, and there is an unmistakable whiff of a very English, guileless earnestness. In King Priam, the brilliant, awkward vocal lines and angular, volatile instrumental writing aren’t tailored to individual parts, and his device of assigning particular obbligato instruments to the main characters (notably the electric guitar’s noodling accompaniment for Achilles) identifies a role without necessarily fleshing it out. Tippett’s Homer-based libretto is portentous and often smirk-inducing (“droning yourself to a coma” raised a few laughs); and, as a disciple of Brecht, the composer is over-fond of using a Greek-style chorus (very well sung by Andrew Slater, Clarissa Meek and Adam Tunnicliffe) to moralise his audience into submission, which has diminishing returns as far as emotional involvement is concerned. 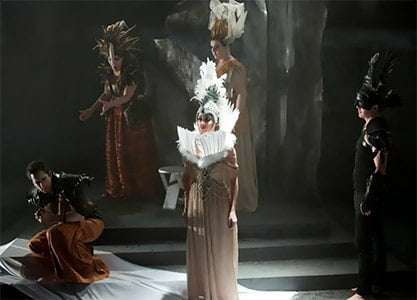 There was a further element of disconnection in having the conductor and his slimmed-down orchestra (22 players) placed behind the stage area – this was only for the Linbury performances, in an effort to contain its lively (to put it mildly) acoustic; the other tour venues will have the conventional pit-to-stage arrangement – which certainly toned down Tippett’s frequently abrasive instrumental palette but didn’t add to a feeling of responsiveness. It also made the stage area look cramped.

For all that, though, you cannot help but admire Tippett’s integrity and consistency of vision, and James Conway’s staging matches Tippett’s brisk progress through the Trojan War, which covers just about everything apart from the Horse. Designer Anna Fleischle has limited herself to a tour-friendly fixed set of a big rock but has gone to town on the costumes, which are mythic, totemic and over-the-top bizarre.

Most importantly, Conway never loses sight of the fact that the story – for all its didactic asides to the audience – is primarily about the consequences of choice – Priam’s and Hecuba’s choosing to terminate the infant Paris, the decision of the Young Guard to give the child to be reared by a shepherd, and Helen’s choice to throw in her lot with the grown-up Paris – “the most beautiful man in the world” according to the libretto – and thereby hangs a tale. 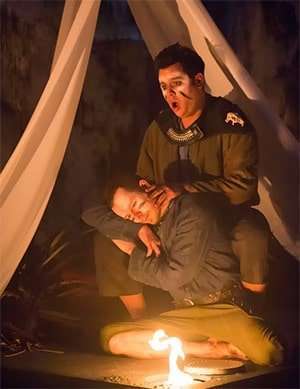 The tour performances are well shared out, but even so I feared for the singers in these punishing roles, for the men in particular. Roderick Earle, impressive in war-paint and a crown of bones, just about had the necessary weight and authority for the first two Acts but began to tire in the third, just as the role becomes even more demandingly epic, as he copes with Hector’s death and has to beg Achilles to return his son’s mutilated corpse. Laure Melroy was brilliant and secure in Hecuba’s high ululations; Camilla Roberts went to the heart of Andromache’s unswerving devotion to Hector’s heroism; and Helen was suitably erotic and self-serving in Niamh Kelly’s lustrously sung performance.

Grant Doyle’s macho, thrillingly sung Hector made a gripping contrast to the effete Paris of Nicholas Sharratt, who fully exploited the role’s potential. Charne Rochford’s powerful, high tenor was magnificently deployed in Achilles’s war-cry and was just as effective in the tender love scene with Patrochlus (the richly voiced baritone Piotr Lempa). In Hermes’s hymn to music, Adrian Dwyer hinted persuasively at the lyricism of Tippett’s earlier music. Under less than ideal conditions, Michael Rosewell kept the various instrumental groupings in touch with the singers, with a significant contribution from the pianist. Wherever positioned, the ETO Chorus was excellent. You could easily imagine a more expansive approach to what is, for many, Tippett’s most successful opera, and no doubt this will emerge during the tour.