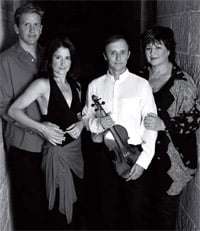 The fiftieth anniversary year of Ernest Bloch’s death provides the ideal opportunity to take stock of an output which has yet to regain the eminence it enjoyed during the composer’s later years. Last month, University College Opera gave the first UK staging (and a persuasive one) of his only opera ï¿½Macbethï¿½, while this Wigmore Hall concert was the first of two focusing on Bloch’s music.

The first half featured relatively little of it, though, even if Paysages (1925) is among the most appealing of Bloch’s shorter works ï¿½ a rarefied evocation of the ‘frozen North’, followed by a characterful portrait of Alpine domains, then concluded with a bracing study in Tongan rhythmic patterns. Idiomatically conceived for string quartet, too, as the Goldner Quartet made plain in this engaging performance.

It was followed by a fine account of Beethoven’s ‘Harp’ Quartet ï¿½ one of fastidious attention to detail, as in the poised transition from the first movement’s slow introduction to its main Allegro, or in the breathless link between scherzo and finale. The former was as fiery as the variations of the latter were deceptively disengaged, and the only proviso concerned a slow movement whose pathos seemed a little too reined-in. Overall, though, a memorable performance ï¿½ as was that of the Piano Quartet movement that is Mahler’s sole surviving contribution to chamber music literature. Uncommonly dark and intense here, its main themes yielded real eloquence and built to a climax of notable vehemence in the development, before the music retraces its steps on the way to a coda of fatalistic calm.

Admirer of Mahler as he was, Bloch could not have encountered this teenage effort and the former could have heard but little of the younger man yet to make his mark. Nor could Bloch’s First Piano Quintet (1923) be thought Mahlerian, yet there is a very real sense in which this is the kind of chamber music that the older composer might have been writing had he lived for another quarter-century. This is partly to do with the Jewish inflection of the melodic material, and partly with the densely chromatic nature of Bloch’s harmonic thinking. Add to this a rhythmic trenchancy comparable to Bartï¿½k or Stravinsky from the period, and the outcome is an engrossing work whose neglect is the more unaccountable.

Interesting, too, is its cyclical evolution over three movements of increasing length: thus an opening movement whose emotional contrasts are made more so by its fierce overall concision; then a slow movement that moves between the hieratic and impassioned with an underlying sureness of purpose; before a finale that draws elements from that proceeding into a searing climax, at length subsiding into a lengthy postlude that effortlessly resolves the accumulated tensions into a serene repose.

Aided by the formidable pianism of Piers Lane, the Goldner Quartet gave a performance no less committed than was these artistsï¿½ recent Hyperion recording, with an added frisson such as befits a live occasion. The scherzo from DvoÅ™ï¿½k’s Piano Quintet, nimbly done, made for an unexpected but not at all unwelcome encore. More Bloch can be heard at Wigmore Hall on 15 July ï¿½ marking the exact date of the fiftieth anniversary of the composer’s death.