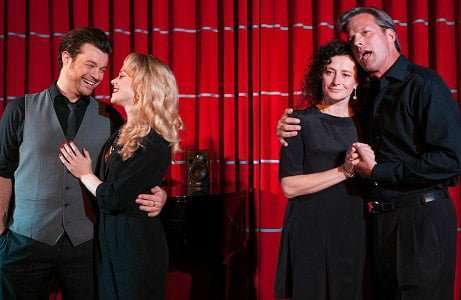 It used to be said that the London-born American songwriter Jule Styne (1905-94) was sadly little known and underrated, but that has become debatable with the classic status of Gypsy, and the revivals of Gentlemen Prefer Blondes and Funny Girl. The Crazy Coqs cabaret room is currently resounding to the Styne’s sparkling melodies as four attractive and talented performers give a medley of numerous creations by Styne, with top-flight lyricists including Stephen Sondheim, Sammy Cahn, and Betty Comden & Adolph Green. Many of the songs are standards, from the 1942 hit ‘I’ve heard that song before’ to the Gypsy number that gives the evening its title, but there are a few that are less familiar, such as ‘It’s high time’, rarely heard outside of Gentlemen Prefer Blondes.

Anna Francolini also lends her distinctive style to that show’s biggest hit, ‘Diamonds are a girl’s best friend’. At the start of the cabaret, the cast weaves its way through the room, promising that ‘Everything’s coming up roses’, Alastair Knights keeping things on the move. Knights is no stranger to anthologies, having staged a production of Putting It Together, but that piece had a narrative thread. Though some linking of numbers can be detected, this is primarily a straightforward celebration of a great talent, and what wonderful songs most of them are.

Comden & Green supplied particularly witty words for ‘If’, with its hilarious selection of rhymes for the title – Amy Lennox dramatises the piece so vehemently that one or two of the lines are swallowed up, but her admirably comic frenzy as she hits the high notes proved a showstopper. The ballad side of these lyricists was highlighted in a soaring, beautifully rendered ‘Long before I knew you’ from Simon Bailey. It comes from Bells Are Ringing, which also yielded ‘Just in time’ and ‘The party’s over’.

It was good to hear Lennox revive the lovely ballad from Funny Girl, ‘Who are you now?’, so much better than the daft ‘People’, which has alas become a must for any Styne compilation. Funny Girl’s lyrics were by Bob Merrill, and he was Styne’s collaborator on the two most obscure songs that are unveiled here – the wry ‘When I’m drunk I’m beautiful’, which Angela Lansbury introduced in the short-lived Prettybelle, and a song of regret, ‘Winter was warm’, from the animation Mr Magoo’s Christmas Carol. Both are splendidly evoked by Anna Francolini, who teams with Lennox for an appealing ‘Let’s see what happens’, from the Styne & Harburg score for Darling of the Day.

Some amusing re-interpretations include Bailey and Flavin getting in on the strippers’ number, ‘You gotta get a gimmick’, and the two boys doing Gypsy’s ‘Broadway, Broadway’, promising to take us rather than Baby June to see the bright lights. Alex Parker provides the sterling accompaniments, getting all too rare moments to solo in such numbers as ‘It’s magic’ and ‘Time after time’. Any anthology is going to prompt regret at omissions – the great wartime ballad, ‘I’ll walk alone’, has been ignored, for instance.

But one is more justified than usual in making such a criticism, since the evening – just over 50 minutes – is a little undernourished. To be left wanting more is not, of course, a bad thing, but there is no dialogue or information about the great composer, and it is the first show I can remember in which the encore is simply a repeat of the opening routine! It is a tribute to the fine performers that the evening, a feast of fine songs and singing, seems too short.