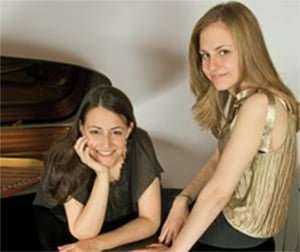 Praise for pianist sisters Lidija and Sanja Bizjak, whose playing of Stravinsky’s own four-hand arrangements of his The Rite of Spring and Petrushka was nothing less than sensational. Seated stage right, the siblings played as one, tossing aside each technical challenge and infusing the music with both strength and sensibility. The Rite of Spring is arguably more sinister, more frightening in its piano reduction, while losing little of its primeval brutality. In hearing Petrushka in a similar piano version, one focussed on the similarities of these two works whose orchestrations make them sound at first so different. The Bizjaks played brightly in all the ‘dance’ music of the latter’s score, with rhythms light and fairground melodies lilting, and was of a very high standard of playing indeed. 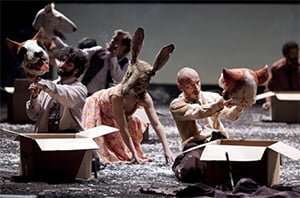 Keegan-Dolan, founder-choreographer of Fabulous Beast company created The Rite of Spring at English National Opera in 2009, and here presents it again in a somewhat pared-down version (21 dancers now reduced to 10). It was successful then and remains so, even if there is a loss in weight of numbers. To this work he has now added a new Petrushka, a counter-balance of light and looking to the future for The Rite’s darkness and focus on the past. Strangely, The Rite, whose ‘location’ is not fixed (it is in ‘the past’) is in this version unmistakably Irish in both, cultural references a-plenty, a scrambled vision of the country’s history. Petrushka, which is so musically fixed in Russia, with folk songs, melodies and rhythms, is given an abstract approach with no sense at all of place or time.

The Rite of Spring is the more successful work, a challenging, confusing assemblage of references as disparate as hare-coursing, smoking, and cups of tea to the fertility rites of pagan Ireland. It is a dark, often brutal visualisation of Stravinsky’s century-old composition, containing shaman-like ritual, perplexing imagery (the dancers at one stage wear dog heads), heavy, rhythmical footwork, nudity and violence. Keegan-Dolan’s small ensemble worked hard, a consciously disparate group of performers of every hue and nationality; though there were moments of a lack of cohesiveness in the ensemble. Ino Riga’s strong stage presence captivated: her open movement quality shone in both pieces. Keegan-Dolan has created a visceral, intensely Irish reaction to this totem, ranking among the finest versions.

His inventiveness runs dry in Petrushka. Shorn of any sense of Irishness – the dancers hurl their clothing from The Rite aside and perform in celestially white tops and trousers – Keegan-Dolan’s movement vocabulary is limited and repetitive, and favouring both feet firmly on terra firma or else in the air in quick jumps, arms swirling and curving in extravagant ėpaulement with little arabesque, or attitude. Stravinsky’s music bustles and sings, but Keegan-Dolan’s gestures remain prosaic, rarely illuminating the score. Here there are no props, just dull movement – the opposite of The Rite. He follows the narrative of Petrushka in the vaguest of ways, the puppet’s solo in the second Room Scene echoed by Rachel Poirier’s white-faced dance, but where Nijinsky’s puppet-with-a-soul is burnt into the retina of dance consciousness, Keegan-Dolan’s creativity slews out of the mind as soon as it enters. The final image is arresting: Poirier ascends a rope ladder released from above – the soul ascending? But it is not enough to allow this second work to stand comparison with the first. But then there was always the Bizjak sisters to hear and to marvel at once more.