This double-bill was a showcase for some of the performers on The Royal Opera’s Jette Parker Young Artists Programme. This excellent scheme allows these young talents to try things out in the confines of the small stage of the Linbury, and as such provides an excellent training ground. This particular performance of this Walton double-header, which seemed very appealing on paper, offered training in how to cope with unforeseen events, and also that it does allow the artists to experiment as well – even when the results are not entirely successful. Ultimately, that is probably to the good. 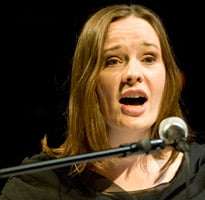 The performance of “Façade” proved a bit of a trial. This was largely due to placing of the instrumentalists in the pit and some pretty dreadful amplification. In theory, the use of microphones for those reciting could work well as it should allow them plenty of scope to inflect Edith Sitwell’s witty and elaborate words above the instruments. The original concept was to have the players recessed and the narrators speaking through megaphones. In the Linbury, the amplification meant that the voice/instrumental balance was far from ideal. Spatially it was all wrong as Thomas Guthrie was standing to stage-right but his voice boomed out of a speaker to the left. Hilary Brennan was at least standing on the same side as this particular speaker – but she was horribly over-amplified and some of her vocal effects were on the verge of being painfully loud. This ultimately distracted one from the elegant and characterful accompaniment of the players and the deft conducting of Dominic Grier – a pity, as where they did manage to imprint, their contributions were very fine. They should have also been on the stage. 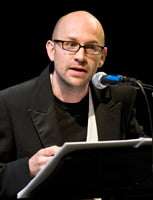 Of those reciting, Guthrie was probably the more successful in that he managed to make all the words clear through the complicated patter rhythms, and he adopted a more naturalistic and colourfully inflected delivery of the texts. Brennan was rather more overtly theatrical and declamatory. Indeed her way of speaking occasionally seemed over-arch and contrived and also emphasised the presence of musical bar-lines. It is preferable if the language seems more natural and has more flow and keeps time with the orchestral accompaniment more subtly than here. 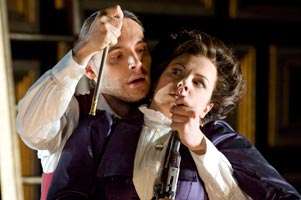 “The Bear” was more successful. Steven Moore conducted the now slightly larger ensemble and delivered a witty and lush account of Walton’s vivid score, complete with its echoes of Richard Strauss, Offenbach, Britten and others. Moments such as Madama Popova’s account of her life of probity whilst she lived with her philandering late-husband had wonderful lilt, and the gritty more modernist music that accompanies Smirnov’s appearances provided great contrast. Rhys Jarman’s set was atmospheric and well lit too.

This particular performance was rescued from disaster. The announced Popova, Monika-Evelin Liiv, became ill and unable to perform. Given that “The Bear” is not staple repertory and that the Programme would not have resource for employing understudies it was remarkable to find the excellent Julianne Young to sing the role from the side of the stage at such short notice. She did so spectacularly well and her voice not only has the necessary youthfulness of tone and mezzo-richness for the part but also the power for the higher reaches of the role. I’d like to hear her again. She gamely entered into the spirit of improvisation engendered by the occasion, and won a deserved ovation – and even though her final top note went awry it seemed appropriate to the situation on the stage where Thomas Guthrie was acting the role in full costume! This was probably not what he must have expected when taking on the direction, and if occasionally there was an element of Hinge and Bracket, this did not matter.

The two other singers turned in fine performances, too. Vuyani Mlinde was a mellow-voiced Luka and Kostas Smoriginas the extrovert and forceful-voiced Smirnov. Both these artists could on occasion have projected the text a little more clearly (Julianne Young’s every word was crystal-clear), but their performances were strong dramatically nonetheless. Despite the atmosphere of ‘the show must go on’ that pervaded the theatre Walton’s entertaining opera shone brightly. Experiential training of artists as to how to cope with circumstances such as these for their future careers, whilst not on the curriculum of the Jette Parker Programme one imagines, must be invaluable for their development too.