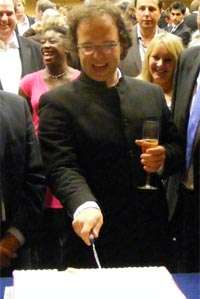 This concert was entitled “Farewell, but not Goodbye”, thus it was fitting that Sakari Oramo chose to round off his decade-long tenure as the Principal Conductor of the City of Birmingham Symphony Orchestra with a programme that eschewed valediction in favour of an affirmative leave-taking.

How better to describe an account of Janáček’s Sinfonietta that fairly crackled with energy right from the outset of the ‘Intrada’ (the additional brass here placed at the top behind the orchestra). The second movement had a coursing fervency, while the third found ready accord between its wilder impulses (here emphasised by the critical edition) and the ethereal calm they arise from and return to. The ensuing scherzo had bracing rhythmic verve, and with none of the gear changes that can ruin its continuity, then the first half of the finale accrued vigour with a Sibelian momentum that carried through into the climactic return of the fanfares – with Oramo being mindful to point up the dynamic emphases that give the closing bars their implacable intensity and irresistible charge.

Oramo had previously tackled Beethoven’s Ninth Symphony in a memorable programme that included the premiere of Julian Anderson’s Symphony, and in the pre-concert talk had openly expressed his reservations about that performance. Certainly there were many differences in the current account. The first movement now evinced heft as well as drive in its unfolding; the cross-rhythmic impetus of the development was finely articulated, though the arrival at the reprise suffered from over-emphasis while the airborne initial stage of the coda was more convincing than its powerfully rhetorical close. Tensile though never humourless, the scherzo fared better in terms of clarifying its contrapuntal detail, though Oramo’s decision to omit the second half repeat was to the detriment of the movement overall and there was still too little distinction made with the faster trio section.

The highlight was the Adagio, and how good to hear a reading that unfolded its intricacy with absolute assurance and at a tempo that secured the expressive gravity this movement deserves. Seldom has it sounded more inevitable, and hence more convincing.

If the finale was less consistent, this was not for lack of thought on Oramo’s part. Bracing but not unduly rushed, the introductory summing-up made way for an ‘Ode to Joy’ theme thatstayed on the right side of portentous. Oramo then steered the remainder of the movement, in its endlessly intriguing synthesis of sonata and variation designs, with evident purpose and, at times, real conviction. The excellence of orchestral playing (the central string fugato impressively articulated) was matched by that of the soloists – lacking little in projection even when placed at the rear of the platform (and how refreshing to have them present from the start of the performance) – as also of the CBSO Chorus, its members’ prowess in this music hardly needs reiterating. The interplay of voices and instruments during the “Seid umschlungen…” section was mesmeric in its rapture, while the combined fervour and effervescence of the coda rounded off the performance in suitably triumphal fashion.

A flawed but absorbing reading, then, which left no doubt as to Oramo’s overall grasp of symphonic conducting, or the excellent shape of the current CBSO. A cursory look at the repertoire as detailed in the programme also leaves no doubt as to the breadth of music he has tackled this past decade, while neither the consistency of his performances nor the quality of the orchestral playing – the strings on their day arguably the finest in the UK – should come as a surprise. Oramo’s work with the CBSO continues in earnest next season: tonight was more in the way of a well-deserved send-off.