Award presented by His Royal Highness The Duke of Kent 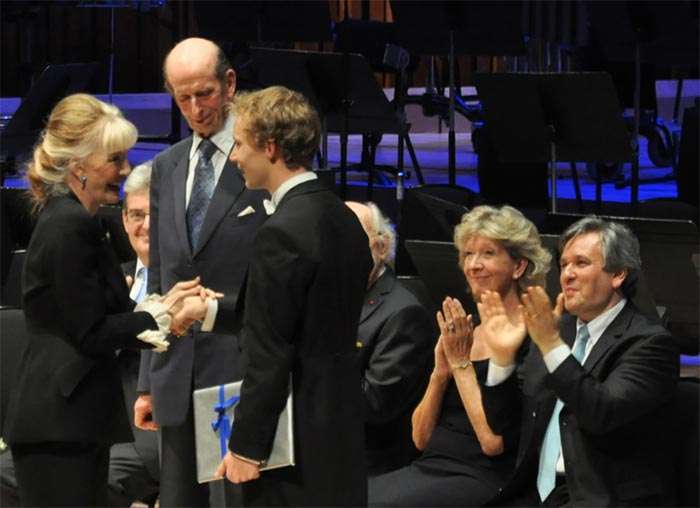 The latest fixture of the long-running Donatella Flick LSO Conducting Competition (open to EU members under the age of thirty-five) started with a hat-trick of Force of Destiny overtures, one of Verdi’s finest, a marvellous piece easily withstanding three consecutive performances.

We were down to three Finalists from the twenty competitors that started, the early rounds housed at the Guildhall School. Vlad Vizireanu (31) was first-on to conduct; if his view of Forza was not the most dramatic it was detailed and expressive and not run away with. Vizireanu displayed artistry and elegance. Kerem Hasan (24) offered something punchier, with greater drive yet some illustration, but by the close he was doing the ‘theatrical’ obvious. Niklas Benjamin Hoffmann (26) found a little more bass in the music, but it was rather tension-less and the slower music sagged; trumpets were more to the fore though.

Whatever rehearsal time the three conductors had with the LSO to refine things such as dynamics, blends, balances, and the like, wasn’t always apparent, and although one may have noticed the occasional thing personal to each conductor beyond tempo, the tub-thumping timpani-playing was exactly the same each time (and similarly domineering later). Whatever the benefit of antiphonal screens to watch each conductor (even though Barbican Hall sightlines are good), I found them distracting and irritating – watch the conductor where he is and the corner of one’s left eye had no escape, no more than the right one did. Visual conflict!

So, Round One (as it were) to Vizireanu. The splitting of Elgar’s Enigma Variations into three groups proved very unsatisfactory. Hasan was given the ‘short straw’ with the first four, not much chance to make an impression, and although well-paced his selection was, ironically, under-characterised. Hoffmann did well, indeed his Enigma portion proved to be the evening’s highlight, heartfelt music-making, giving the slower turns of phrase time to breathe and culminating in a spacious and affecting ‘Nimrod’ that was eloquent rather than elegiac and which faded into significance silence. Vizireanu started well with Variation X ‘Dorabella’, gently stammered (and I’d like to mention the viola-player, save it wasn’t the listed Edward Vanderspar), but ‘GRS’ was under-tempo enough to suggest Dan the bulldog as a senior, arthritic animal. After which the remaining Variations became tedious from Vizireanu (and that’s a first for such unimpeachable music), although Andrew Marriner’s magically rapt clarinet solos in XIII ‘***’ were special, whether quoting from Mendelssohn’s Calm Sea and Prosperous Voyage or, as some believe, Schumann’s Piano Concerto. Another enigma!

Hoffmann had triumphed in Elgar but was less impressive in the first of Rachmaninov’s Symphonic Dances, ignoring the Non allegro marking and going hectic instead, and even causing the occasional togetherness problem for the LSO. At the movement’s lyrical bittersweet centre Kyle Horch’s saxophone solo was attractively smouldering, although a quickening of pace when the strings take up the sweeping melody rather undid things. In succession Vizireanu was presented with the sinister-waltz second movement and was doing well, and with a rich violin contribution from Roman Simovic, but interest waned as the already-slow tempo became lethargic and things came off the rails, the LSO back on-track as soon as possible. Finally, Hasan’s account of Dance #3 had satisfaction on its side with appropriate tempos and he kept tension through the middle section that can meander. However fast and loud, though neither is a requirement, there was a lack of fiery emotionalism that should suggest the music (‘Dies irae’ and all) is hurtling towards the abyss.

So, for this writer, each conductor had at least one success – Vizireanu with Verdi, Hoffmann with Elgar, and Hasan with Rachmaninov – and each of them had his from-memory piece. One would love to have been in the Jury Room and great to see Gennadi Rozhdestvensky (with Viktoria Postnikova) back in London; maybe his diary and the LSO’s were being compared for free dates, hope so. For what it’s worth, speculating on the Winner, I felt it more appropriate to award a joint second prize (this had became a two-horse race) but if there must be a First, then be it either Hasan or Hoffmann. And it was the latter who won, and based on his Elgar selection that was just about right.