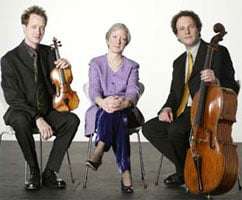 Since they shared anniversary years in 2006, Mozart and Shostakovich can often be found co-habiting concert programmes. In this case the two chosen works could hardly have been further apart emotionally, as the breezy G major work – the first of Mozart’s works to explicitly bear the title of ‘piano trio’ – was followed by the barely concealed anger of the Shostakovich.

This received (in this BBC Radio 3 Lunchtime Concert) a distinctly chilly performance from the Florestan Trio, and Richard Lester’s opening harmonics were threadbare in the extreme. The composer’s conscious efforts to put all three instruments on an equal footing reflected well in this performance, and even when Susan Tomes was hurling down the huge octaves of the finale, Lester and Anthony Marwood could still easily be heard.

As always Tomes’s control was a feature of the performance, given with great clarity and sensitive phrase-shaping. Later on in the work, however, the rough edges were smoothed a little, the scherzo not sweeping forward with the raw emotion it might have done, and Tomes, in the lower register of the finale, giving out the closing material with a touch more legato than is normally heard.

The slow movement was keenly defined, Tomes shaping the eight chord progressions that dominate it, and when this music returned in the finale a stillness was found that few performances of this work achieve, the thematic threads closely woven together.

Balance of a quite different kind was maintained in Mozart’s trio, the piano more obviously pitted against the strings. Moving on from Haydn, Mozart promotes the cello to a more active role, rather than merely doubling the left-hand on the piano. It subsequently enjoys a poignant duet with the violin during the minor-key variation of the finale, and here Lester and Marwood were particularly sensitive.

Tomes gave a beautifully flowing account of the first movement opening, setting the scene perfectly in a solo capacity, and then ensured the flourishing chords of the Andante were given equal importance with the semiquaver figurations that followed, for these provide the starting point for much of this attractive movement’s melodic development.

All three players were clearly enjoying the music, finding the subtle touches of humour enjoyed by Mozart’s chromatic sleights of hand, before finishing unexpectedly firmly. In the finale, Tomes’s right-hand was extremely well defined despite the rapid figuration assigned to it.