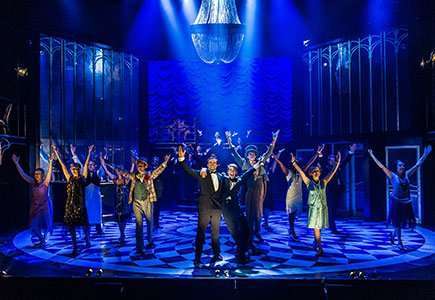 Vicki Baum (1888-1960) was originally a harpist in Vienna. After three years playing in an orchestra she changed careers and became a journalist. She was a nurse during World War One and then took up boxing. Twice married, first to a reporter and then to a conductor, Baum had great success as an author and wrote over fifty novels, some of which were taken up by Hollywood. Grand Hotel was her biggest success. To gather material Baum worked as a parlour-maid at the Adlon, Berlin’s grandest hotel where famous guests stayed, including Chaplin, Marlene Dietrich, Roosevelt, J. Edgar Hoover, Einstein, Caruso and Josephine Baker. It was a place where everything happened – deals were struck (shady and otherwise), assignations were made, scandals were created and guests were involved in all manner of romantic situations.

In 1930 in Berlin the book was turned into a play and then produced in New York in 1931. The following year M-G-M filmed the story with Greta Garbo, John Barrymore, Wallace Beery, Joan Crawford, Lionel Barrymore, Lewis Stone and Jean Hersholt. At the Oscars ceremony it won an Academy Award for the Best Picture, although none of the acting or production personnel involved was honoured, and it remains to this day the only film to have achieved that. 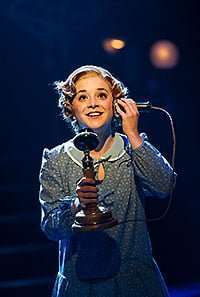 Cut now to 1958 and, following their success with Kismet (borrowing from Borodin), Robert Wright and George Forrest had the idea of turning Grand Hotel into a stage musical. Luther Davis adapted the novel. The show, then called At the Grand, opened in California but never transferred to Broadway. The setting had been changed from Berlin to Rome in the 1950s and this didn’t appeal to admirers of the original novel. Although Paul Muni was in the cast when it played LA and San Francisco, he didn’t want to extend his contract, so the producer cancelled the transfer to New York.

Another thirty years go by and in 1989 Wright, Forrest and Davis took another look at it. Director-choreographer Tommy Tune was taken on board and he reconceived Grand Hotel as a two-hour, almost through-sung presentation with no interval and incorporating dialogue, song and dance to create a sense of everything happening at once. Some songs from At the Grand were retained and others dropped. Tune then brought in composer-lyricist Maury Yeston, with whom he had worked previously. Grand Hotel opened in New York to great success, was nominated for twelve Tony Awards and won five. It was the first musical to run over one-thousand performances on Broadway after Big River (1,005), scoring 1,017. A production came to the Dominion in London in 1992 but ran only a few months. The Donmar Warehouse staged it in 2004. 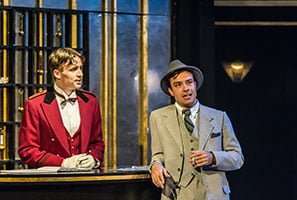 Grand Hotel is a grand musical with over twenty speaking roles plus the same number in the choruses of bellboys, telephone operators and scullery workers, so it is ideal for a student company. The production at Guildhall School doesn’t have quite that many performers but it’s not far short. It’s fast-moving and, rather like any hotel lobby, there is always something going on. Several stories are interwoven through a weekend in Berlin 1928: the handsome if bankrupt Baron Gaigern cons a gangster pretending to be a chauffeur into getting him a hotel room; aging Russian ballerina Grushinskaya has to be persuaded to continue dancing because she needs the money; the terminally-ill, former book-keeper Otto Kringelein wants to enjoy what remains of his life in luxury; Hermann Preysing, a failing businessman, is hoping his temporary typist, Flaemmchen, will take his mind off other matters with a trip to the US, while she herself is dreaming only of a Hollywood career. The course of the show details how the lives of all these desperate people are changed at the Grand Hotel. It is all surveyed by the brooding presence of Colonel-Doctor Otternschlag, still injecting morphine for his World War One wounds. Even the concierge Erik has a story, waiting to hear if his wife has survived giving birth to their first child.

Between them, Martin Connor and Bill Deamer have staged a splendid production on Morgan Large’s opulently stylish set. Deamer’s choreography evokes the mad, slap-happy, roaring-twenties, just before the Wall Street Crash, guests and shareholders all having a good time before the next big chop stops them in their tracks. The whole is bathed in the beautiful lighting of Richard Howell and aided by the pinpoint sound design of Colin Pink.

The acting and movement seems altogether perfect; the main roles are totally believable and there is no sense of young actors playing at being old. Ceri-Lyn Cissone makes Grushinskaya an emotional mixture of fading talent combined with a burning desire to be loved, and open to being conned by the Baron. Jay Saighal really gets to the con-artist Gaigern, a mixture of charismatic charm and pure evil. Ben Hall as Preysing, the failing businessman who tries to satisfy his lust with the innocent Flaemmchen, is just rotten through and through. As the temporary secretary Rebecca Collingwood has many of the best lines. Looking forward to being discovered by Hollywood, she is hoping for a career that’s “all singing, all dancing and no typing”. Her future appears to be with Otto Kringelein, despite his terminal disease. Joey Phillips as Otto is both moving and hilarious and reminds one of a budding Michael Crawford or a Hugh Grant.

The big numbers are brought off with immense finesse. ‘Grand Parade’, ‘Who wouldn’t dance with you?’, ‘Bonjour amour’, ‘The Grand Charleston’, ‘Bolero’ and ‘Welcome to life’ are all superbly staged, while ‘We’ll take a glass’ is a sure-fire showstopper for Kringelein and the Baron. In all these numbers the energy levels are kept up throughout the non-stop running time. The songs are attractive without being too memorable, but there is one that is outstanding, between the Baron and the dancer, ‘Love can’t happen’. Steven Edis’s GSMD Orchestra works wonders, producing a big and bold Broadway sound. It could all transfer to the West End right now without any worries, the most professional production I have seen in ages.