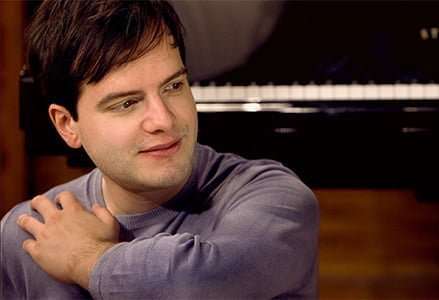 Francesco Piemontesi had a lot of distraction to contend with in the first part of his Wigmore Hall recital – an exquisitely timed chirrup of a text message landing in-between the closing chords of the Mozart Sonata and an insistent whistle from a hearing aid that drove someone in the audience to register his complaint with commendable force. These irritations, though, were a back-handed compliment to the special empathy and concentration Piemontesi’s playing encourages.

In the past five or six years, this 31-year-old Italian-Swiss pianist has established himself as one of the foremost artists of his generation, with a notable command of style and identity irradiating his performances, and his polymath interests are evidence of a wide-ranging intelligence that defines the expressive rang of his playing rather than creating a barricade of wry detachment.

It was the vocal quality of the Mozart, one of his biggest Sonatas, that was most apparent, enhanced by the Fazioli piano’s subtle blend of bright softness. Piemontesi opened a door onto the poised dialogue with its moments of resolution and synthesis with such disarming spontaneity it was like peering over Mozart’s shoulder (a quality that also comes across strongly on Piemontesi’s new Mozart release). The amount of detail in weight, silence and tonal control repays his debt to his teacher/mentor Alfred Brendel with interest, although Piemontesi’s sense of flow seemed more natural, especially in the highly wrought drama of the slow movement that made the deceptively easy finale (originally published separately as K494) sound like music from another planet. Fortepianists say – well, they would, wouldn’t they? – that only their instruments can do full justice to the low-register close, but Piemontesi and his Fazioli seemed well suited to the task.

In the first movement of Beethoven’s Opus 109, Piemontesi played down exaggerations of contrast with a resulting dip in the music’s high-definition subjectivity, but you could not help but be enslaved by the clarity of his pedalling and, after the Mozart, a massiveness of sound. The last movement, though, hit the spot. You could hear the internal workings of the opening Theme striving for a release completely realised by Piemontesi’s mercurial control in the ensuing Variations, and the sublime cranking up of momentum to the trills of Variation VI had the piano humming with abandon.

The total security of Piemontesi’s technique was made clear in his calibration of volume, perspective and tone in the two Ligeti Etudes, his playing every bit the imaginative equal of the composer’s astonishing re-evaluation of pianistic possibilities. Interestingly, though, in ‘Des pas sur la neige’, Piemontesi’s palette of greys veered towards luscious in one of Debussy’s palest landscapes, in marked contrast to the vivid wit of Puck’s dance.

So far, I’d thought that Piemontesi’s recital would be dominated by the Mozart, but then he confounded expectations with his excoriating, electrifying performance of Schubert’s C minor Sonata. If the Mozart had been vocal, the Schubert was robustly instrumental – indeed, you could hear Piemontesi orchestrating it at the keyboard, pushing Schubert’s piano writing to the edge. I loved the care and discretion Piemontesi lavished on the pedalling, so that you were never at the mercy of mere blasts of sound, but most memorable was the surge of possession that brought the finale to melting-point hysteria. This was drama and tragedy on a par with the ‘Unfinished’ Symphony, and all from a coolly undemonstrative performer. There was a different but no less potent spirit of possession at work in his encore, a dazzlingly virtuosic and extrovert performance of ‘Feux d’artifice’, the last of Debussy’s 24 Préludes.