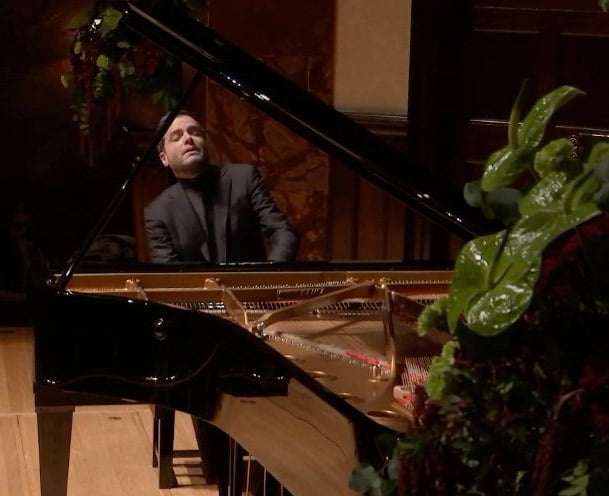 Almost by stealth, the 36-year-old Francesco Piemontesi has become a major player on the younger edge of the piano firmament. His Mozart series, which came to Wigmore Hall three years ago, swept the board as far as poise, wisdom, brio and intuition are concerned, but he had been performing a broad and more heavy-weight repertoire (J. S. Bach transcriptions, Rachmaninov, Liszt, Beethoven) since he started establishing his formidable reputation from around 2007, backed up by a substantial discography. This has most recently included his first all-Schubert recording, of the last three sonatas (on Pentatone), which was covered on BBC Radio 3’s Record Review (on October 19), and the extract, the central crisis from the Andantino of D959, speaks volumes about Piemontesi’s depths of perception – not to mince words, it’s a revelation – which came across with just as much strength in the first Wigmore Hall recital of his Schubert series. All of which bodes well for the five recitals to come (the next one is in May 2020).

Schubert’s piano music requires special technical resources to uncover the potential of what often looks disarmingly straightforward on the page, and Piemontesi’s unfussy, rarely flamboyant style is a good fit, opening the floodgates to a range of expression and intensity that instantly reels you in. His opening octave unison in the C minor Impromptu almost dared the ensuing, unaccompanied slip of melody to exist, and his spare pedalling emphasised the sense of music that has nowhere to hide. Piemontensi’s musical relationship with Alfred Brendel has been much discussed, and while Piemontesi clearly shares his mentor’s balancing act of structure and poetry, I get the impression that he never uses form at the expense of colour and spontaneous lyricism. In the past, he has preferred Fazioli pianos, but here he was playing a Steinway that responded superbly to needs of shade, voicing and volume, not to mention Piemontesi’s inimitable powers of characterisation. He spun all four Impromptus with the sort of detail that lifts rather than analyses the music, with an attractive, slightly secco touch in No.1 that lit up its nervy chromaticism and some finely judged rubatos. The mid-section histrionics of No.2 transformed the infectious bounce of the opening, and his recessed half-voice of the rustling accompaniment of No.3 gave a strong idea of Piemontesi’s refined control of weight and tone.

The Impromptus were private. The mighty D major Sonata was unassailably public, spacious and virtuosic. Schubert wrote it on a prolonged holiday at the spa-town of Gastein (hence its nickname), for a virtuoso pianist, and there are moments when it seems to breathe the same air as Beethoven’s ‘Hammerklavier’. Piemontesi had the full measure of a first movement that can sound like a piano reduction of a symphony, and took the Allegro vivace direction to heart in some impressively muscular playing. He then went to town with the poetic Con moto second movement, which you think would have enough material to play with in the first section alone, until Schubert branches out into a surging sequential passage, the passion of which takes your breath away, as did Piemontesi’s playing, which strode through the music’s epic ambition. For some reason he put the brakes on in the Scherzo, again marked Allegro vivace, but the steadier tempo made sense of the dynamic syncopations and the barbed right-hand mordants. The Rondo opens with a nonchalance similar to the start of the Eroica’s finale, and Piemontesi relaxed into its benign humour.

His encore, the A flat second Impromptu from the D935 set, only confirmed this artist’s rare sensibility, which has all the signs of becoming addictive. The recital is available on the Wigmore Hall’s live streaming site, and I also recommend his conversation with Michael White, on the same site.