Guys and Dolls
A Musical Fable of Broadway based on a story and characters of Damon Runyon, with music and lyrics by Frank Loesser to a book by Jo Swerling & Abe Burrows 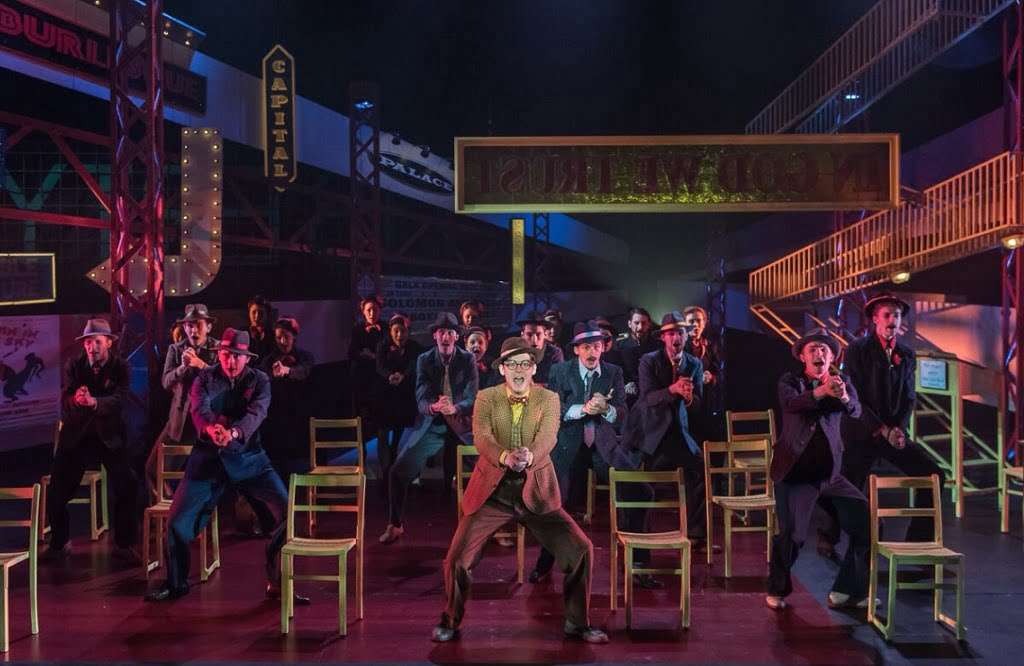 Ten years ago, for this very site, I reviewed the Guildhall School’s final-year students’ musical Bye Bye Birdie, also directed by Martin Connor. The plot shared some sensibilities with Frank Loesser’s masterpiece, Guys and Dolls (which was then receiving its most-recent West End revival, courtesy of the Donmar Warehouse). Now Connor brings Guys and Dolls to the Guildhall School, listing “profound thanks” in the programme to producer Tristan Baker who is bringing Chichester Festival Theatre’s 2014 production into the Savoy Theatre from this December. I haven’t seen that but I’d be hard-pressed to enjoy it more than this production at the Silk Street Theatre.

On Adam Wiltshire’s severely diminishing perspective of Broadway, complete with neon signs and precipitous zig-zagging fire escapes, our sharp-suited, double-breasted crap-shooters gather to hear news as to where Nathan Detroit has arranged the next game. But Detroit has just as much to worry-about in his 14-year-long engagement to local Hot Box chanteuse, Miss Adelaide. Unbeknownst to Detroit, she has lied to her mother that they got married 12 years ago, and have five children with another on the way. 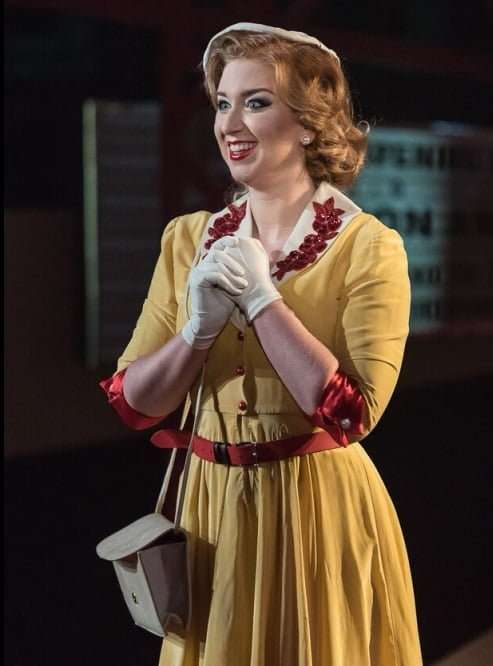 Meanwhile Loesser even more successfully portrays the pitfalls of young love as Sky Masterson falls hook, line and sinker for leader of the Broadway Mission, Sarah Brown (‘I’ve Never Been in Love Before’). In what started out as simply one of his trademark unusual bets, Sky finds himself admitting for the first time that his Christian name is Obadiah. Even if Sarah tries to resist because of his gambling, she learns a few quick lessons and accepts a bet with Sky that he can provide twelve genuine sinners for a midnight prayer meeting. He – singing ‘Luck Be a Lady Tonight’ – bets the crap-shooters for their souls and wins. But the guys don’t have the last word – Miss Adelaide and Sarah meet up and plan to ‘Marry the Man Today’ (“and change his ways tomorrow”).

Every character from Damon Runyon’s world is here fully-rounded aided by Abe Burrows’s cracking one-liners. Connor’s young cast deliver again and again, topped by hugely enjoyable dance routines masterminded by Bill Deamer and assistant Kylie Anne Cruickshanks. These lead to one of the great showstoppers, ‘Sit Down, You’re Rockin’ the Boat’, which gives Alexander Knox his star moment as Nicely-Nicely Johnson, and fills the stage with not only some nifty footwork, backed by the hallelujah-ing Mission Band, but also chair-handling.

Constantly fidgeting with his titfer (hat!), hunched-shouldered and moustachioed Oscar Batterham gives Detroit the air of forever teetering on the brink – either in falling foul of the law (in the shape of Craig K. Talbot’s prowling Lieutenant Brannigan) or having to tie the knot. Katrina McKeever’s detailed portrayal of Miss Adelaide, perpetually cold-ridden, is pitch-perfect as she learns to put 14 years of disappointment behind her and to take things into her own hands. 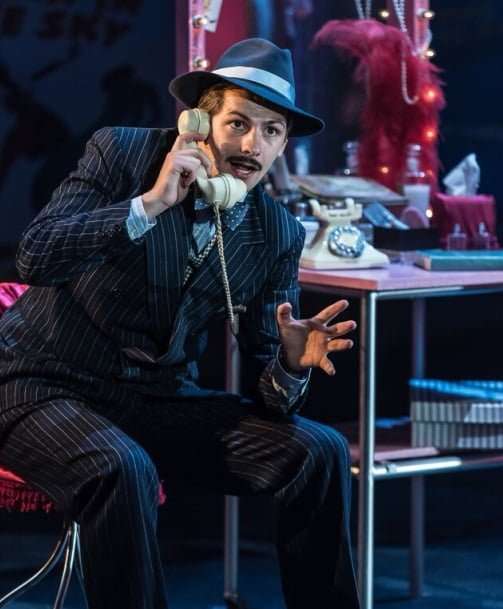 Suave and as cool as his grey suit, Luke Dale’s Masterson finds a perfect foil in Rebecca Lee’s straight-laced Sarah, who only begins to lighten up when Sky takes her to Havana for dinner and she gets a taste for milkshakes laced with Bacardi and proves she can pack a punch when she finds someone else dancing with him. This riotous scene (backed by a massive postcard of Havana flown in from the flies) ends with a domino-effect inspired punching sequence leaving all but Sky and Sarah floored.

In preparation for the big, wide world of professional stage work, both the band (particularly the bells) and the cast are amplified, and diction is extremely good, with Loesser’s lyrics hitting home time and again. Guys and Dolls is one of those musicals in which every number is a hit, and here all of them come off brilliantly as part of a production that is one to catch and to remember.

Looking back a decade, I re-checked the cast for Bye Bye Birdie and noted that – ten years on – I have regularly seen a number of the cast in various productions: Hayley Atwell, Ricky Champ, Matti Houghton and Henry Pettigrew to name but four. I look forward to following the careers of this year’s outgoing students, and not just the principals.

Guys and Dolls opened a few nights ago. There are performances to Wednesday 15 July, though Monday 13 and Tuesday 14 are only available as part of the Guildhall School’s Summer Gala Evenings.