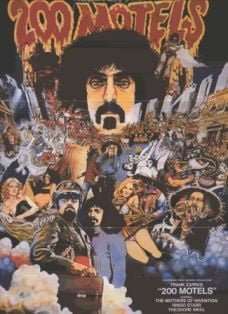 Just what is 200 Motels? Is it a film, show, review, opera (or stage-work of some kind), satire, piss-take? Actually it is all of these things, and doubtless more. Conceived when a tour-weary Frank Zappa contemplated life on the road in general, and its effect on the members of his band in particular, 200 Motels came together as the 1960s mutated into the 1970s: its release in 1971 as a feature-film largely confounded those who saw it (though, in true ‘cult’ fashion, it went on to enjoy a prolonged existence at cinema clubs and film festivals), while Zappa’s intention of presenting it in live performance at the Royal Albert Hall foundered over objections of obscenity (he went on to lose the case over costs some four years later) and such a presentation seems not to have been attempted anywhere until now. Forty years too late as this may have been, it was a tribute to the reckless yet always compulsive vision of one whose stature has not so much risen in the two decades since his death as expanded in range and gained in substance to an extent matched by few of his contemporaries.

Which does not thereby make it a masterpiece – an epithet such as Zappa would have dismissed from the outset. What he most likely intended to achieve with what he called his “surrealistic documentary” was a sustained diatribe on the inanity attendant on the alternative music scene as it evolved over the preceding decade, the individual and provocative having gradually been consumed by the corporate and conformist. That said there is nothing moralistic, let alone preachy, about Zappa’s world-view: rather he sought to transcend things ‘as they were’ into an entity with all the trappings – while not the conventions – of high art. Defining the musical substance of 200 Motels is not easy, and in many respects pointless, but to suggest a ‘rock opera’ as written by Stockhausen or even Varèse may not be wide of the mark. Indeed, the choral writing suggests more than a passing acquaintance with the definitive (‘Europa’) version of the former’s Momente, while the latter’s fruitless efforts to realise a new kind of music-drama between the wars might have had a not dissimilar intent.

Playing here continuously for nearly 100 minutes (several longer than the film and almost the same as the double album released soon afterwards), 200 Motels consists of 13 “suites” which range from brief songs or sketches to lengthy scenes with the weight and density – musical as well as theatrical – of full-blown opera. Certainly the ‘Overture’ has all the vigour and pugnacity of 1920s’ vaudeville remade for the (then) present, with what follows informed by any number of recurrent themes and motifs as the characters play out their darkly existential comedy. Typical of Zappa that he should integrate tensions within his band The Mothers of Invention, not least its members’ calling into question the musical pretensions of their leader, into the very fabric of the enterprise: culminating in the all-round ‘double whammy’ of the scene ‘Penis Dimension’ (its salacious humour a potent indicator of things to come) with the grand finale that is ‘Strictly Genteel’, in which the assembled forces unite in a paean to artist endeavour – and all the shit that this entails.

Of course, the film – with its indelible cameos of Ringo Starr disguised as Zappa, Keith Moon attired as a nun and the Royal Philharmonic Orchestra drawn unwittingly into the mayhem – could hardly be replicated, but the present account was a resounding success. Claron McFadden entered fully into its spirit as the music journalist reduced to ‘jerking off’ a stuffed toy incarnation of Zappa, while Richard Strange (aka ‘Kid’ Strange from the proto-punk band The Doctors of Madness) was a commanding Narrator, and Tony Guilfoyle wholly in-character as Zappa as he contemplates his theatre work ‘The Pleated Gazelle’. Ian Shaw and Brendan Reilly did not suffer comparison with ‘Eddie and Flo’ in the film, while Sophia Brous and Diva Zappa (youngest daughter of) were raunchily alluring as groupies Janet and Lucy – with the former no less eye-catching as Larry the Dwarf. On so crowded a stage, direction had to be kept simple and Natasha Betteridge duly obliged with a streamlined presentation that did not obfuscate an already complex dramatic assignment.

Directing the superb London Voices and expanded BBC Concert Orchestra, Jurjen Hempel was in absolute control of a score whose textural intricacy could easily have fallen victim to its inherent ambition. Yet the outcome was an absorbing realisation of what remains Zappa’s most impressive conception and, due to its unceasing relevance, his most enduring.