From Here to Eternity
Music by Stuart Brayson, Lyrics by Tim Rice, Book by Bill Oakes based on the novel by James Jones 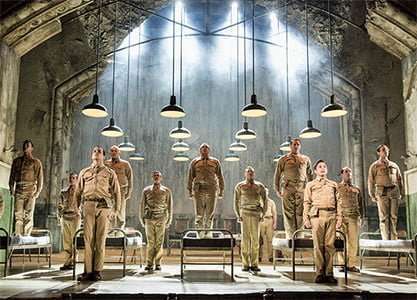 At almost three hours the show is quite long enough and I wouldn’t want to encourage anyone to extend it; but the main problem with From Here to Eternity is its bitty construction. The text by Tim Rice (lyrics) and Bill Oakes (book) hurtles through its paces at a rate of knots via scenes that are almost always too briefly sustained for the characters to develop any depth. While an evening of quick-fire fragments may suit a light-hearted show like Joseph and the Amazing Technicolor Dreamcoat, in an adult psychological drama of massive ambition the audience needs a lot more help than it gets here if it is to invest its sympathies in the characters and their story.

Since the action unfolds at a Hawaiian US army base in 1941, it is probably not a spoiler to say that the Japanese air force will attack Pearl Harbor at some point in proceedings, and when that moment comes it is dynamically well staged by director Tamara Harvey and choreographer Javier de Frutos – as indeed is the entire show. Ahead of this impending doom, though, a pair of star-crossed love affairs must run their courses, as anyone who has seen Fred Zinnemann’s 1953 movie adaptation will remember. (Those were steamy days when Sex on the Beach was not something Burt Lancaster and Deborah Kerr drank through a straw.) 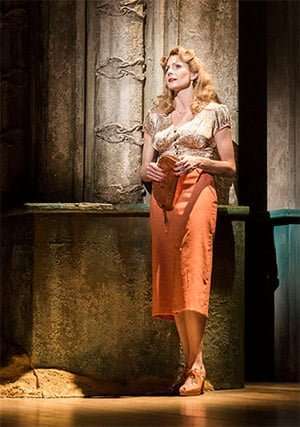 Soutra Gilmour’s striking set is framed within a trio of proscenium arches that are even more tumbledown than the Shaftesbury Theatre itself was before its recent restoration. The designs are low-tech but high-impact and as restless as the show into which they are so seamlessly integrated. The staging, in short, is a triumph.

Individual and ensemble performances within the huge cast are uniformly successful. If ever there was a triple-threat musical, this is it; yet pick any name at random from the cast list and you’ll hit on a star turn. It is no fault of the excellent Siobhan Harrison that her character, Lorene, is so hazily sketched – despite her sultry cabaret turn, ‘Run Along Joe’ – nor of Joshua Lacey that his antagonist, Private Bloom, is given so little context for his extreme behaviour. And it is immensely to everyone’s credit that they come as close as they do to squaring the circle drawn by writers who sometimes demand both teeth-‘n’-smiles and gritty realism within the same scene. 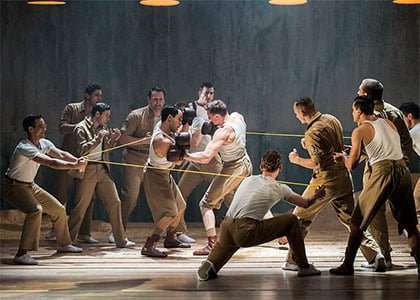 Unfashionable though it is to admit it, over the years Tim Rice has proved his gifts by writing some of the modern musical’s finest lyrics; but alas Stuart Brayson’s workmanlike score does little to accommodate his trademark quirks. Brayson’s music is full of swing and sassy rhythms, yet relatively few numbers have the zing of memorability about them and too many of Rice’s words are neutralised by their melodic ordinariness. The best material comes in Act Two when Angelo, a diminutive Italian-American straight out of Bilko, sings the bitterly ironic number ‘I Love the Army’, followed closely by the irresistible duet for the male leads ‘Ain’t Where I Wanna Be Blues’, a toe-tapper that fed the cheering audience like bread for the starving.

While Rebecca Thornhill and Darius Campbell were every inch the all-American adulterers, well matched physically, vocally and in their stage chemistry, the unquestioned star turn came from Robert Lonsdale as Private Prewitt. Lonsdale, who looks like a young Tim Robbins, acted with sardonic understatement and sang with a voice that should make him millions: an easy, high tenor that glided effortlessly up to a rock falsetto. Some day he should play Freddie Trumper in Rice’s earlier musical, Chess.

From Here to Eternity is emphatically not a feel-good show for the whole family. There are incident-packed visits to a brothel and a gay bar plus generous helpings of profanity, homophobia, sadism and murder. Yet for all the adult content it is a strangely old-fashioned musical that’s stylistically almost a companion piece to South Pacific. It’s disconcerting to see a chorus line of tush-slapping goodtime girls in a new work of musical theatre, yet here they are. Eventually that much-anticipated Japanese air raid intervenes to ginger things up, but it’s a long time coming.