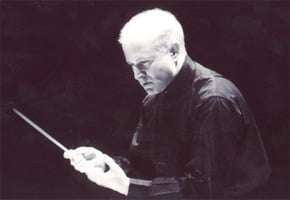 As a composer who studied with Messiaen when barely a teenager, and as an increasingly high-profile conductor, George Benjamin was well placed to give a concert as part of the Southbank Centre’s year-long “From the Canyons to the Stars”. This short but unerringly assembled programme featured one of his own works, alongside three seminal post-war pieces all written within five years of each other.

Benjamin’s Sudden Time (1993) is still his most extensive exploration of musical time in its intricate layering of diverse types of continuity and contrasts in motion. Compared to his earlier concert performances, Benjamin now seems less concerned with the fastidious placing of detail than with ensuring the work’s overall sweep and impact; qualities assuredly to the fore in this powerfully controlled account such as found the Philharmonia Orchestra at its collective best – one in which an underlying rhythmic trajectory and a consequent momentum were manifest almost in spite of themselves.

Quite a contrast with Xenakis’s Pithoprakta (1956) that opened the concert. Although only his second acknowledged work, this already bears the hallmarks of the composer’s stylistic maturity – notably in the range of techniques brought to bear on the string orchestra, augmented with xylophone and woodblock to mark ‘temporal’ time as well as two trombones that at one point underline ’emotional’ time. With its treatment of the strings as individual lines, balance and co-ordination are at a premium here: suffice to say that not only were these prerequisites met, but the performance also evinced a capriciousness, even humour, still rarely associated with this most uninhibited of post-war masters.

As with his Greek-born contemporary, Ligeti came of age only once settled in Western Europe, but his not unrelated concepts of time and motion could hardly have yielded more divergent results than in Atmosphères (1961). This eschews melodic, harmonic and rhythmic motifs for transformation of timbre and dynamics. Yet it is hardly static in form, depending on the workings of micro-polyphony to determine its evolution. Benjamin ensured seamless transition through the densely-woven textures, building to a luminous climax before lightly-brushed piano strings are heard resonating into silence.

From here to Chronochromie (1960) is a much greater step than a single year (back) might suggest. This interplay between ‘time’ and ‘colour’ encouraged Messiaen to deploy what is perhaps his most varied soundworld – no piano but awash in percussion – and Benjamin brought out this quality in full measure. Even more impressive was a cumulative follow-through between sections, so that the whole became more than the sum of its parts – evident during the cumulative increases in intensity between the corresponding ‘Strophes’ and ‘Antistrophes’, while the counterpointing of different birdsong on 18 solo strings in the ‘Épode’ was scintillation in itself. Lacking was the last degree of projection in the outer sections – thus the ‘Introduction’ was a shade under-powered, while the chordal reiterations of the ‘Coda’ had the right hieratic majesty without being quite the culmination they ideally need to be.

Even so, this was a finely played and authoritative reading which more than confirmed the rapport between orchestra and conductor. Benjamin amply deserved the musicians’ applause at the close, and it is to be hoped this collaboration will become more than an adjunct of South Bank retrospectives.