A series of recitals featuring his major organ works, and in several appropriate locations, promises to be a highlight of Southbank Centre’s Messiaen festivities taking place in London during this his centenary year. Olivier Latry, one of the principal organists at Notre-Dame Cathedral and one of only four players so far to have recorded Messiaen’s complete organ music, arrived at Westminster Abbey for a performance of the first of Messiaen’s organ-cycles and the one that has reached the widest public. 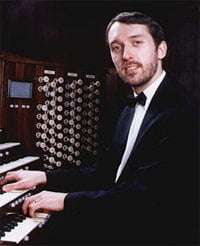 La Nativité du Seigneur (1935) represents a breakthrough in its integration of rhythmic procedures, with which Messiaen had already experimented, so that they are made fundamental to the music’s temporal proportions and harmonic unfolding. Although the composer was to advance further in this domain, La Nativité… remains the touchstone for his mature musical language and, as such, impressed admirers and detractors alike when Messiaen gave its premiere in Paris during January 1936.

Yet these ‘nine meditations’ were unlikely to have found public favour had they not been perceived as following in the French organ tradition, and they can be perceived as a continuation of the ‘cyclic’ format pioneered by César Franck and continued in the organ symphonies of Widor and Vierné, as well as in the larger- scale works of Dupré and Tournemire. Seen from this perspective, La Nativité… becomes a synthesis of that tradition along with new possibilities with few, if any, successors in the organ medium.

It is in his awareness of this coexistence between ‘old’ and ‘new’ that makes Latry such an inspired interpreter of the work (and on this occasion anyone hearing Messiaen’s organ music for the first time could not have wished for a more potent induction). From the deceptively passive opening of ‘La Vierge et l’Enfant’, a sense of its constant evolution was undoubted: one that diversifies in the elegant naïveté of ‘Les Bergers’ and the meditative rapture of ‘Desseins éternels’ before intensifying in ‘La Verbe’ – which, in its seismic opening contrasts leading to an expanse of ecstatic melisma, is itself a confirmation of Messiaen’s greatness as an organ composer. Nor was the textural richness of ‘Les Enfants de Dieu’ or rhythmic agility of ‘Les Anges’ underplayed, with the harmonic logic of ‘Jésus accepte la souffrance’ outlining an expressive progression from darkness to light such as Messiaen was later to revisit with renewed intensity. The desert-crossing of ‘Les Mages’ was conveyed with a strangely surreal clarity, before the vast cumulative energy of ‘Dieu parmi nous’ brought the work to a powerfully affirmative close.

Throughout its 65 minutes, Latry was impressively in control of the Harrison and Harrison organ that has adorned Westminster Abbey for six decades, projecting its tonal range from the most delicate of filigree to the weightiest of chords so they filled the acoustical expanse with ease. In this respect, he had prepared his listeners unerringly with a rendition of Apparition de l’église éternelle (1932) – the composer’s calling-card on being appointed organist at Sainte-Trinité (a position he held until just before his death in 1992), and whose progress from granitic arrival through ecstatic culmination to mysterious departure is surely as thrilling a 10 minutes as anything in the organ literature.