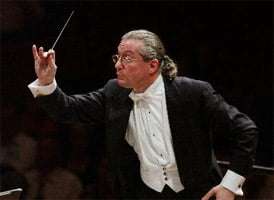 The Philharmonia Orchestra made the last of its five contributions to “From the Canyons to the Stars” and concluded in glorious flourish with Scriabin’s The Poem of Ecstasy (completed in the year of Olivier Messiaen’s birth, 1908), which opened out with well-timed splendour, the Royal Festival Hall organ adding foundation. This was a slow-burn performance, rather too careful at times in choices of tempos (23 minutes for a performance of this work is a little ‘stretched’) yet lucidly sounded and sure of itself if lacking some ‘danger’ and fluidity if not emotional release. Mark David’s trumpet solos were heroic. The select audience was an appreciative one.

Opening the concert, Debussy’s Faune (launched by Kenneth Smith’s inviting flute solo) had also been a little static and lacking atmosphere as well as being rather careful if always instinctive and sensitive to the needs of the music.

Sylvain Cambreling, although he has a wide orchestral and operatic repertoire (and is a dedicated champion of new music), certainly has a reputation for conducting Messiaen’s music (there is an 8-CD set of his orchestral music on Hänssler Classic, CD 93.225) and his experience showed through here.

Both these Messiaen performances displayed expert direction. “Poèmes pour Mi” (‘Mi’ being the nickname of Messiaen’s first wife, Claire Delbos) is one of the composer’s most voluptuous scores (setting his own poetry, a “glorious love-letter” to Claire). It found the replacement soprano Lauren Flanigan (it should have been Mireille Delunsch) lacking nothing in confidence or communication (or Wagnerian amplitude) but rather studied in approach, somewhat too ‘mature’-sounding and not always on the note. The greater ‘excitement’ came from the orchestra, whether in ‘Terror’ or, the last of the cycle, ‘Fulfilled Prayer’, yet the latter just needed to be ‘unleashed’ a little more to be fully conclusive.

The most totally successful performance, and very revealing, was Réveil des oiseaux, the first of Messiaen’s ‘birdsong’ pieces. When considered as a totality, this separate if related collection might be thought too much of a good thing. Yet Réveil des oiseaux has a freshness (and wit) not always apparent in later such works; and Messiaen’s ability to chart from midnight to midday (as Réveil does) is uncanny – from mysterious nocturnal calls to bright joy, the ‘Dawn Chorus’ (its complexities very precisely layered) being especially uplifting.